There’s one thing about the 2016 season that I think we can all agree upon: the Dallas Cowboys had perhaps one of the best, if not the best, draft classes they have had in the history of the organization. Heading into the 2016 NFL Draft, a lot of Dallas Cowboys fans wanted them to draft the best defensive player on the board. The two favorites were Joey Bosa and Jalen Ramsey. Of the two, only Ramsey was still available when the Cowboys were on the clock with their fourth overall draft pick. 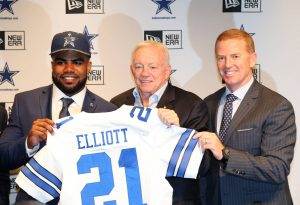 We all know how this scenario played out now, and I don’t think anybody would argue that the Cowboys didn’t make the right decision by taking Ezekiel Elliott over Ramsey. What Elliott was able to do for the Cowboys on offense and for the defense was simply outstanding!

He finished as these leagues leading rusher in 2016 and was a serious threat to break Eric Dickerson’s longtime held rookie rushing record. Elliott couldn’t have asked for a better rookie season and the Cowboys couldn’t have drafted a better player that was more valuable to the team in his first year in the NFL.

The Cowboys selection of Elliott in the 2016 NFL Draft alone could have possibly made this draft considered to be successful, but it looks like they struck gold on nearly every one of their draft picks.

Dak Prescott’s surprising rise to start at quarterback for the Dallas Cowboys couldn’t have been written better if it was a Hollywood movie. His rookie success helped the Cowboys reach the playoffs and earned him Offensive Rookie of the Year honors. And to think, he was the second fourth round pick for the Cowboys in the 2016 NFL Draft.

Elliott and Prescott would be the front liners for the Cowboys 2016 draft class, but we can’t forget how much Anthony Brown and Maliek Collins also contributed to the team as rookies.

Collins, the Cowboys third round draft pick, played so well that it allowed defensive coordinator Rod Marinelli to use Tyrone Crawford more as a defensive end in 2016 to help with their atrocious pass rush. Collins looks to be a starter next year in the interior of the Cowboys defensive line and has a bright future ahead of himself in the NFL. 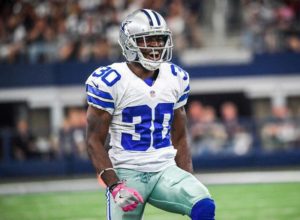 If not for Dak Prescott’s fantastic rookie season, I think we would all be talking about how well Anthony Brown played for the Cowboys in the secondary. I recently wrote an article where I revisited his rookie year, and you might be surprised that he had very similar numbers to Jalen Ramsey, despite being drafted five rounds later.

Brown is likely expected to start on the outside at one of the cornerback positions for the Cowboys defense in 2017, and if you are counting, then that is four possible starters the Cowboys found in the 2016 NFL Draft.

Of course, that’s not even mentioning what Rico Gathers, Charles Tapper, and Jaylon Smith can contribute to the team in 2017 after basically being redshirted their first year in the NFL.

If Smith is able to return to his former self, then the Cowboys have a difference maker to play linebacker the next season and a player that was regarded as one of the best prospects in the entire 2016 draft class when healthy.

Tapper could possibly help with the pass rush next season, but anything they get from him would just be an added bonus. The same can be said for Gathers as well.

With such a successful draft class, it’s going to be hard for the Dallas Cowboys to match such results once again in 2017. But, I can almost guarantee that expectations will be high for all of the rookies they add in the upcoming NFL Draft.

Whether it’s right or wrong, all of these incoming rookies will have a lot of pressure placed on them to come in and contribute as much as the 2016 draft class.

We can only hope that the Dallas Cowboys can once again strike gold with their draft picks, but unfortunately we’re going to have to wait until April to find out.

Do you think expectations will be raised for the Dallas Cowboys incoming rookies?

Please feel free to use the comments section below to share your thoughts and opinions on this topic.