Because the Dallas Cowboys have a top-5 pick in this year's draft, this draft is a great time to look into drafting the successor to Tony Romo. The first two options that come to mind in this year's draft class are Memphis' Paxton Lynch and California's Jared Goff. I completed my analysis of Lynch and if you want to check out that article, you can view the link here. Today I decided to watch Goff on film and tried figuring out how he fit as a member of the Cowboys.

The first thing that jumps out on film to me is Goff's natural pocket feel. The starter for three seasons at California, Goff really specializes in the system he's in. For example, from multiple games I've watched, I've seen California rely on the same third down play. The problem I have with Goff is that he is truly dependent on the system he's playing in, and because of that, it's hard to fully get a grasp on how his play will translate to the professional level.

I think he might struggle making plays on his own at the professional level, but if he is placed on the right offense and put behind a good offensive line, Goff will have the ability to go through his progressions and get the football out to his playmakers with accuracy, which is what he is best at.

There are a ton of concerns regarding Goff's arm strength, one thing that many quarterbacks struggle with in the NFL. However, Goff's intelligence as well as his accuracy do a good job of counteracting that flaw. One thing I've seen with Goff is his solid ball placement.

This throw is a perfect example of how Goff knows where to throw the football to put it where only his receiver can bring in the football.

Going back to earlier, I really like Goff's naturalness in the pocket. At 6-foot-4, 215 pounds, Goff has good stature, especially for today's prototypical quarterback. He's a little thin and he looks a little awkward with his slender body as well as his release, but Goff's footwork is spectacular and, despite not being the most athletic guy in the world, Goff does enough to evade pressure and get the ball out, as is the case by the throw shown below:

I like Goff at the line of scrimmage. His experience shows each time he takes a snap. Since his freshman campaign, Goff has improved in this regard. He sees the field really well. When defenses play zone, Goff can simply pick apart a defense. Goff is quite intelligent with the football as well. He threw a few questionable interceptions this past season, but his anticipation skills are terrific and his overall decision-making is quite remarkable given being just a college quarterback.

When you pair all of this intelligence and quarterback makeup on top of being in an NFL scheme at the collegiate level, it's easy to see why many teams (such as the San Francisco 49ers and the Cleveland Browns) are going to be interested in Goff. Goff makes so many NFL-passes throws. This next throw is probably my favorite one from the film.

In this throw, Goff looks off a read before finding his target. Goff's anticipation skills allow him to make a throw in between three defenders. Teams will see this throw and simply be wowed.

The next pass I put in here was another example of how well Goff can anticipate the defense and get a pass accurately in a small window.

Watching film on Goff, it's safe to say that he stays away from taking the chance on deep passes. Goff likes to drive down the field rather than put the ball down the year. Here's one of the first deep-balls I've seen from Goff and despite the arm strength issues, it was a good ball. More importantly, the way Goff squares up and launches the football impresses me the most.

How does Goff fit in Dallas? In the end of it, I'm a big fan of Goff. In fact, I trust Goff more at the NFL level than Lynch. In terms of how he projects to the Cowboys, Goff fits quite nicely. Obviously, Romo does it really in terms of the offense. But really, Scott Linehan's offense is very vanilla in its approach.

Linehan doesn't ask much from his quarterback. Knowing that, if Goff is placed behind the likes of Tyron Smith, La'el Collins, Travis Frederick, and Zack Martin for the bulk of his career, Goff will be able to get the football to guys like Dez Bryant, Cole Beasley, and Jason Witten (that is if he hasn't retired by the time Goff takes the reins of the offense).

If Goff was Dallas' pick in the first round of this year's draft, I wouldn't be opposed to it at all. It sucks to not watch your first-round pick play, but drafting Goff assures the Cowboys a quality understudy and a potential great quarterback waiting to take over. Goff has the tools to be a superstar in the NFL, and I believe he has the skills to do just that with the Cowboys.

Next up on the docket: Connor Cook

I agree with you 100%. Goff is going to be special

As a matter of fact, I would take Goff over Lynch

I've actually seen some mock drafts that don't have Paxton Lynch going until the 2nd round. There are some out there who just don't have him ranked very highly and they must believe the combine process will shake some of that out.

I guess my question is besides the height- what's different than kellen Moore? (I'm not on his bandwagon) BUT most of what u just said—lack of arm strength/intellect etc is exactly what we're said about Kellen Moore!!! So why waste a first round pick when we can get a more raw but maybe more upside later in the draft? Just my thoughts! I question on going after a QB just to go after a QB in the first round 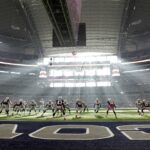 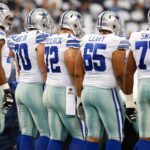