With less than two weeks separating draft followers from “football Christmas”, the opportunity for the Cowboys to improve off of an already dominant 2016 season – sparked by this season’s draft class of course – is an incredibly exciting one for Cowboys Nation ahead of the 2017 NFL Draft.

These next 11 days until draft night from Philadelphia will be full of added speculation to either get our hopes up about a top player sliding to the 28th overall pick or one of our draft targets flying up the board.

If the Dallas Cowboys’ seven picks play out like this however, the future for the star will have never been brighter. 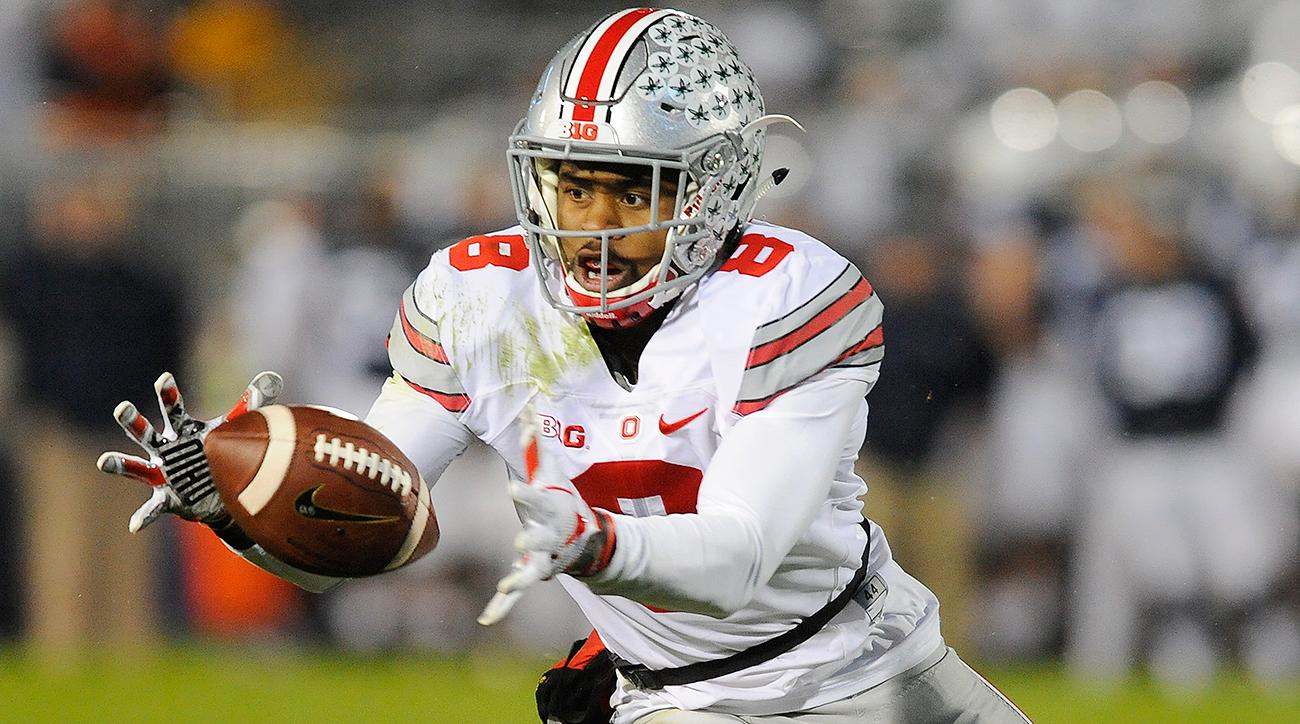 Speaking of players that have improved their stock late in this draft process, Ohio State’s Gareon Conley has drawn interest as a defensive backfield teammate of both S Malik Hooker and CB Marshon Lattimore – two players with incredibly high ceilings that will both be off the board well before Dallas comes on the clock.

If Conley remains on the board for the Cowboys though, they should be ecstatic as his floor makes him an instant starter in a secondary needing cornerbacks. With incredibly polished cover skills and NFL-ready size, Conley is a steal at the bottom of the first round.

Gareon Conley also took a pre-draft 30 visit with the Cowboys.

The Cowboys’ need at defensive end has been talked about endlessly since yet another loss to the Packers in the NFC playoffs, and for a while this talk included Kansas State’s Jordan Willis as a potential first-round target.

A steal with the 60th overall pick, Willis might not be the flashiest pass rusher, but his elite playing strength paired with some polished counter moves on the edge and burst to capture the corner would automatically make him an important part of Rod Marinelli’s defensive line rotation.

Landing yet another plug-and-play starter on the defensive side of the ball with their third pick in the 2017 NFL Draft, the Cowboys are a perfect fit for Marcus Maye out of Florida.

In replacing Barry Church, Maye could excel with his athleticism and awareness close to the line of scrimmage, while Byron Jones’ versatility as a deep safety would protect Maye from having to play deep in coverage where he struggles to react as quickly and breakdown on tackles.

There’s a reason the Cowboys were comfortable with moving on from both Church and J.J. Wilcox in free agency, and it’s because of athletic studs like Marcus Maye available in this draft to replace them.

With their last pick before the sixth round at 211th overall, the Cowboys land arguably the top Senior running back in this class with Toledo’s Kareem Hunt. Ezekiel Elliott is obviously the present and future when it comes to Dallas’ running game, but they proved in 2016 that they are committed to the depth behind him. Losing Lance Dunbar to free agency, Hunt can replace Dunbar as a smooth receiver that also runs with great patience and balance.

Darren McFadden is back with the Cowboys as a veteran option behind Elliott for 2017, which would allow Hunt to ease his way into Scott Linehan’s offense.

Landing another one of their pre-draft 30 visits here in the sixth round, Treston Decoud could provide solid depth at CB with his length and athleticism. Having already selected Conley in this mock scenario, the projected starters at CB for the Cowboys would likely be Anthony Brown, Orlando Scandrick, Nolan Carroll, and Conley.

Decoud could elevate himself to a situational player at slot CB and become another sixth round steal at CB for the Cowboys (much like Anthony Brown in 2016) thanks to his fluid hips and quick-twitch ability to mirror receivers.

Derek Rivers has drawn all of the hype as a pass rusher out of Youngstown State in this draft, but his teammate Avery Moss could be just the rotational player the Dallas Cowboys need. While Rivers displays all of the traits to be an elite strong side defensive end, Moss has some intriguing traits and makes some flashes as a true right-rushing end.

Moss’ 34 1/2 inch arms are more than enough for Rod Marinelli to work with in getting the most out of Avery Moss at RDE, having already landed a more premier pass rusher in this draft at 60th overall.

Unsurprisingly, the Cowboys filled their need for depth at OT in free agency with the signing of veteran Byron Bell. This makes offensive tackle less of a draft need, but one they can still address in the seventh round here with a Mississippi State teammate of Dak Prescott.

With 38 career starts at RT, Senior has a lot of work to do to develop into a starter at the next level, but could be just what the Cowboys are looking for in their backups along the offensive line. Drafting at this point for traits, Senior has a strong punch to mirror rushers with the foot speed to make up for his lack of strength at the line of scrimmage.

Realistically, the Cowboys come away with three starters at positions of need here on defense by stealing CB Gareon Conley, DE Jordan Willis, and then S Marcus Maye. Treston Decoud and Avery Moss add depth to the CB and DE positions respectively, where talented depth is certainly needed.

Kareem Hunt and Justin Senior also add to this theme of high-value picks, as Hunt would have a real chance to become a play maker in Dallas’ offense as a rookie at RB while Senior can learn as a backup OT.

The Dallas Cowboys could be one draft class away from building a truly dominant team for years to come in the NFL after dominating the draft in 2016. These upgrades on defense alone would go a long way.

Jonah Tuls Breaks Down 2017 NFL Draft on Upon Further Review

For more on each and every position in this 2017 NFL Draft, be sure to check out my interview with Jonah Tuls on Upon Further Review above!

Tell us what you think about “Dallas Cowboys 7-Round Mock Draft Retools Defense, Addresses Needs” in the comments below. You can also email me at Sean.Martin@InsideTheStar.com, or Tweet to me at @SeanMartinNFL!