When you've lost the last three games and have been outscored 92-22, there's bound to be some frustration among players and coaches alike. This is the situation the Dallas Cowboys find themselves in right now. Cowboys players are reportedly frustrated with Jason Garrett and his coaching staff.

According to NFL Network's Ian Rapoport, Cowboys players are growing frustrated with the lack of adjustments by the coaching staff and the simplistic game plan.

From @NFLGameDay: While #Cowboys owner Jerry Jones has supported coach Jason Garrett, players are getting frustrated with the coaches over their lack of adjustments during the losing skid. pic.twitter.com/o9GbXGxMn0

Honestly, it's not all that surprising Cowboys players are frustrated and that frustration is being directed towards Jason Garrett and his coaching staff. I know that's where I'm placing a lot of the blame, and I think a lot of Cowboys Nation would agree.

It has become increasingly clear the Cowboys coaching staff under Jason Garrett has failed miserably at making in-game adjustments, instead choosing to stick to their simplistic game plan. Look no further than the lack of help they gave the struggling Chaz Green against the Atlanta Falcons and how they were outscored in the second half these last three games. 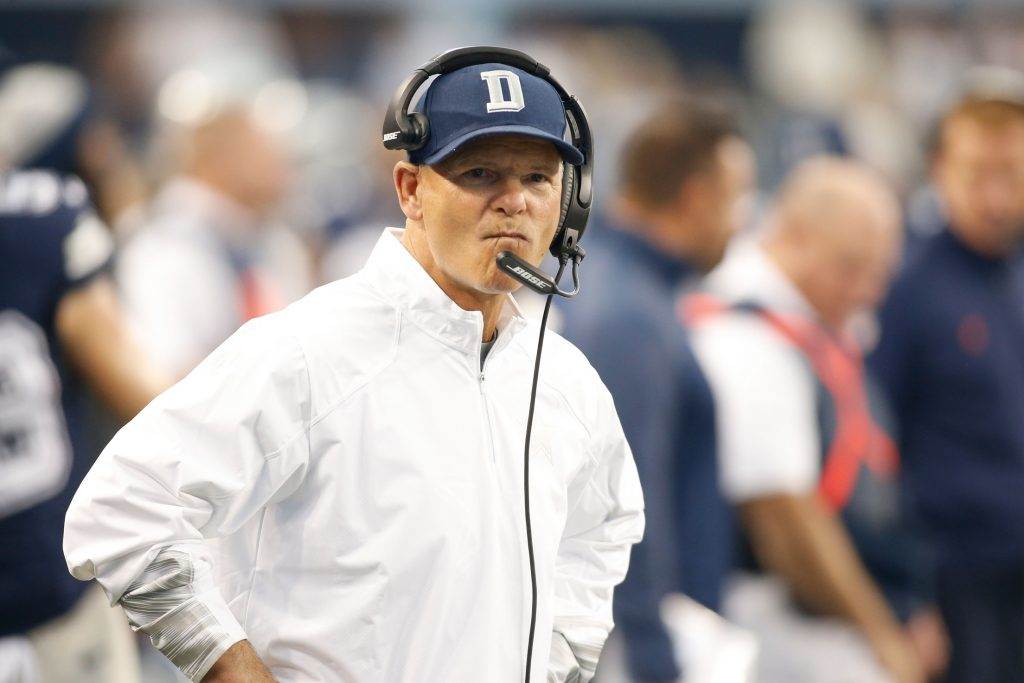 Simplicity was fine when the Cowboy still had Ezekiel Elliott to lean on for offensive production and to help keep the defense off the field. But, what changes have been made on either side of the ball without Zeke in the lineup?

The offense can't lean on the running game like they have done since drafting Elliott and Scott Linehan has yet to make any adjustments to replace his production. His playcalling has become too predictable and defenses simply don't respect the running game enough, which allows them to pin their ears back and rush the passer.

Unfortunately, Rod Marinelli and his defense are arguably even more predictable and simplistic. Like Linehan, he has failed to make any kind of adjustments during the game and continues to play individuals who are vastly underperforming. On Thanksgiving alone, Philip Rivers was able to identify where the Cowboys defense was blitzing pre-snap and adjust accordingly.

The sad thing is, I don't know if we'll see any changes from Jason Garrett or his coaching staff anytime soon. If you believe Jerry Jones, he's not worried about the coaching staff and believes they will turn things around. I for one have my doubts though.

If the rumors are true and the players are indeed frustrated with Jason Garrett and his coaching staff, it's only going to continue to get worse if they keep losing games. Only time will tell how all of this plays out, but making changes to the current coaching staff is starting to look like a top priority after the season.

Is Jason Garrett and his coaching staff losing the locker room?

No kidding the players are frustrated. They have looked like total garbage the last three weeks. What they should be is embarrassed. It’s clear the coaching staff is relatively incompetent at this point. The definition of insanity is doing the same thing over and over again and expecting a different result. My family was laughing at me on Thanksgiving because I was telling them exactly what the Cowboys were going to do on any given play. It’s patently ridiculous. I am also concerned that the players never seem to get any better with this staff. I am really worried about the future, especially of the defense if the staff remains intact. Little worried about Dak’s continues development as well.

in chargers game and others, I have NEVER seen audible out of a CB blitz. Scandrick commits pre-snap and everyone in building knows he is coming off edge. Very few DL drop back in zone blitzes, even our stunts are garden variety.

More than likely since Garrett still has 3 years on his contract at $5 per year he will stay and Marinelli and possibly Linehan will be replaced will younger more innovative minds in the off season. Think about Sean McVay and how he lines up the offense early so that he can call audibles in Goff’s helmet before the mic’s go dead at 15 sec. That’s the kind of forward thinking that we need for a young team.

Jason Garrett is playing the offense like a broken record. It finally took eight sacks or so to make changes at left tackle and it was after Prescott took a beating.. Why are Bell and Chad Green still on the team any professional team? Kavon Frasier and Health deserve more credit for playing heads up ball.
Garrett needs to figure it out and start playing younger players who are hungry to make an impact.

FINALLY! Someone else sees what I have complaining about for two seasons! The writer nailed it! 100% correct! I was starting to think that it was me.