Dallas Cowboys: Signing Orlando Franklin Should Be A Priority

Earlier in May, the Los Angeles Chargers decided to cut ties with their offensive guard Orlando Franklin in order to go younger/cheaper as they try to revamp their offensive line. Things might not of worked out for Franklin in his two years with the Chargers, but if the Dallas Cowboys were wise they should make signing him a priority to upgrade their already talented OL.

It wasn't really a huge surprise the Los Angeles Chargers decided to release Orlando Franklin. He was never really a great fit in their power-gap blocking scheme. He seems much more comfortable in the zone blocking scheme he used to play in with the Denver Broncos. Coincidentally, that's the same type of blocking scheme the Dallas Cowboys utilize.

Orlando Franklin started his career as a right tackle with the Denver Broncos, but made a position change to left guard in 2014. He was one of the better OGs that season and finished second in PFF's pass-blocking efficiency, having only allowing one QB sack and 11 pressures.

As you can see, Orlando Franklin's performance started to take a downward trajectory when he became a member of the Chargers in 2015. He missed six games in his first season with the Chargers with various injuries, but started all 16 games in 2016. He has struggled to regain his form since leaving Denver, but there is reason to believe that will change as a member of the Dallas Cowboys.

Franklin's versatility to play either right tackle or left guard for the Cowboys is one of the reasons why I think they should make signing him a priority. Franklin has already proven he excels in the zone blocking scheme at both tackle and guard, which would give the Cowboys OL yet another player who could play several different positions.

He would provide viable insurance in case La'el Collins struggles out at RT or could come in and be the starting LG from the get-go. There's not really a lot to like about the Cowboys current options to take over for the departed Ronald Leary. Franklin would be an immediate upgrade from all of their current options.

Of course, what this really comes down is to is money and how much it would take to bring him to Dallas. 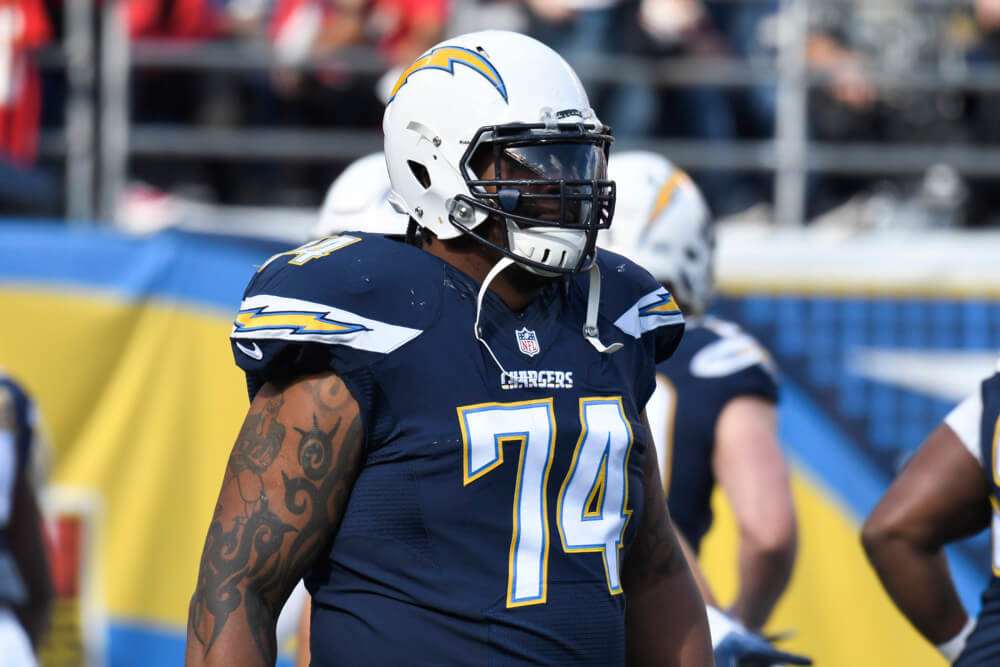 Franklin might be interested in signing a two-year deal with the Cowboys, since he was already set to make $3.5 million this season with the Chargers. This would allow him to cash in again in a couple years and give himself the best possible chance to regain his previous form after playing with Dallas' talented offensive line.

I personally think a two-year, $7 million deal, with maybe a $2 million signing bonus is certainly possible. Dallas has the money to do that and re-sign Zack Martin to a multi-year contract. This would definitely solidify the offensive line for a few more seasons without having to play Russian roulette at LG in 2017.

The starting five of Tyron Smith, Orlando Franklin, Travis Frederick, Zack Martin, and La'el Collins certainly sounds much better than anything else the Cowboys could put together with their current roster. If the organization is serious about protecting Dak Prescott and giving themselves the best chance to win, then Franklin should without a doubt be a priority free agent signing.

Do you think the Cowboys should sign Orlando Franklin?

interesting find. this would be another in the line of finding value add OLine depth that helps future years like Collins/Cooper in previous years. only problem I had is the $2M guarantee money. he is essentially an upgrade to Green with better injury history. If we signed him, it would mean we cut either Cooper or Green

I really have no problem cutting either Cooper or Green. Both players seem to be always injured and have yet to prove themselves in the NFL. Signing Orlando Franklin to a two-year deal would give the Cowboys some flexibility about addressing the future right tackle or left guard position. He can play both positions and the jury is still out on La’el Collins.

I don’t think Dallas is going to cut ties with Green any time soon. Unless, of course we see another season of injuries from him. I like what I have seen when he’s on the field and know they do as well. I also think they want to see Cooper after a full training camp. There is a reason he was drafted as high as he was and if his career was only derailed by injury, then good health may bring the Cooper that was a first round pick. I’m not opposed to bringing Franklin in for a look and let them fight it out and may the best man win.

I don’t think Green is going anywhere either. At worst, he will probably be the swing tackle in 2017. I just have much faith in Cooper. He’s been a journeyman since coming into early because of injuries. It’s hard to go comfortable with him if he does when the starting job.

I think Collins will probably get his payday next year as future RT. It is his to lose. therefore, Cooper/Green/Franklin would be battling for starting LG and swing T position. I do like the versatility aspect of Franklin. but committing $2M guarantee….. how much did we guarantee to Cooper?

Collins still has a lot to prove this season and will have to do it by facing some tough pass rushers. I think committing 2 million guaranteed for a starting caliber OL is worth it. According to overthecap.com, Cooper is guaranteed to make $1 million this season with the Cowboys.

I say bring him on board nothing to lose and a lot gain.Thanks

You have me convinced. Sign him. Let him compete with Cooper and if he wins the job, you cut Cooper and roll into the season with…

Tyron, Franklin, Fred, Zack, Collins as your starting OL and then you have Green, Looney, Cleary, and Bell as your backups. With one of Cleary, Bell, and Green being inactive each week. But you would have excellent depth and flexibility inside and outside.

Orlando Franklin we could use most definitely. The players there are not going to work out.