The Cowboys' 13-3 season of 2016 was talked about endlessly each and every week throughout the NFL season nationally, thanks to rookie sensations Dak Prescott and Ezekiel Elliott, making it no surprise that each is nominated for an ESPY award tonight.

The 2017 ESPY awards will be hosted by Peyton Manning beginning at 7 PM Central Time on ABC. 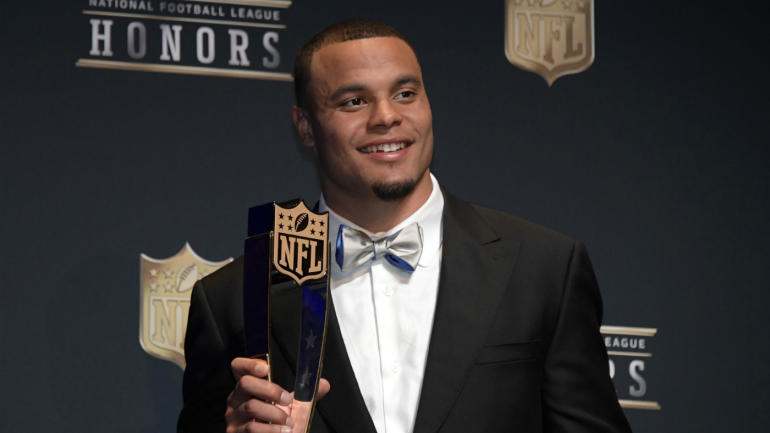 QB Dak Prescott, the league's Rookie of the Year, is nominated for the Best Breakthrough Athlete award along with Giannis Antetokounmpo of the Milwaukee Bucks, Aaron Judge of the New York Yankees, Christian Pulisic of the USMNT, and Olympic gymnast Laurie Hernandez.

The seemingly more prestigious Best NFL Player award will feature RB Ezekiel Elliott going up against Tom Brady, Khalil Mack, Aaron Rodgers, and Matt Ryan. This list is fantastic company for Zeke to be in entering year two, as it features both quarterbacks that competed in Super Bowl LI, the consensus most talented QB in the league and passer responsible for ending Dallas' season, and a dominant edge rusher in Mack.

The Cowboys want to use Ezekiel Elliott even more in 2017 after he led the league in rushing as a rookie, which is a scary thought for the opposing defenses trying to potentially stop the “Best NFL Player” that's yet to reach his ceiling.

A closer look at the full list of nominations also shows more of a silver and blue flavor than initially meets the eye, as the Mississippi State Bulldogs' Women's Basketball team upset win over mighty UCONN in the NCAA Final Four is contending for Best Upset. A proud Mississippi State alum, Dak Prescott made plenty of headlines by attending this game, being featured prominently on ESPN throughout the broadcast, and cheering on his team to a colossal upset all the way through.

Cowboys Nation may never fully be able to step back and appreciate the run Dak Prescott and Ezekiel Elliott brought this team on as rookies, a run that is clearly just getting started with hopes of ending in the Super Bowl for years to come. For now, these two backfield mates will look to earn even more recognition tonight at the ESPYs.

"Dak is our quarterback." Those should be the House words of the Dallas Cowboys. They've been repeated countless times in interviews and press conferences...
Read more
Cowboys News

Add another W to the win column, as the Dallas Cowboys celebrate a 25-10 win over the Washington Commanders. The Cowboys now sit at...
Read more