We're almost done with loss week. The Dallas Cowboys are ready to earn themselves their second victory week of the season as they prepare to fight the Arizona Cardinals at Glendale this Monday night.

After last week, we all want a win. We need a win. At the end of the day, this is still a pretty good football team. A loss like that may turn out to be a good thing for such a young team. That's how you learn, and that's something Super Bowl teams need.

I really hope they learned. And there is no doubt in my mind that there's one main wish that all of Cowboys Nation shares.

After the tough loss last week, that's all that we want. Just win, and let's forget everything about the Denver Broncos.

But we also want a thing or two more. Ladies and gentlemen, this my Dallas Cowboys Wishlist for week 3. I invite you to share yours in the comments below!

The Dak Prescott “sophomore slump” narrative was very tiring during the offseason. Now imagine how it feels like after two poor performances by the Dallas Cowboys quarterback. Unbearable.

That is why this is my number one wish for week 3. It would be great for Dak to hush these narratives against him against a secondary which includes Patrick Peterson and Tyrann Mathieu.

Dak has had four regular season games and one postseason game with three TDs. It would be fitting for to Prescott add another one of those after two weeks of struggling. We know he can overcome stuff, let's hope he does again. 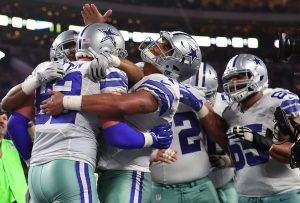 Yeah, I know what I said in the introduction to this article. “Just win”. But I'd be lying to you if I tell you I don't want to see this team have a big win on Monday Night Football.

I just feel that is what teams at the level the Cowboys want to be in do. Look at the Patriots. They lost versus the Kansas City Chiefs in the NFL Kickoff game. It was an ugly loss, too. What happened the very next week?

The Patriots were up 30-13 at halftime against the New Orleans Saints.

That is what I want the Cowboys to show. Show that they will get angry after a loss and that they'll come out and destroy whoever is on the same field as them next week.

I'm calling the Cowboys to win by more than 15 points.

Wish #3: Moore and Lawrence Combine for More Than Two Sacks 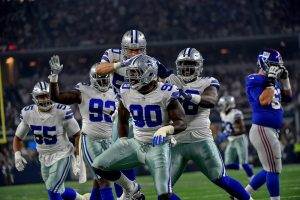 One of the most surprising things for Dallas so far, has been the pass rush. It's fair to recognize that the two offensive lines they have faced are far from good. But hey! Guess what? The Cardinals don't have a very good OL either.

DeMarcus Lawrence has 3.5 sacks. And yes, he is about to make history. On Monday Night Football, DeMarcus Lawrence could become just the third player in NFL History to open a season with three straight multi-sack games.

Lawrence won't be the only pass rusher we will be keeping an eye on tomorrow night. Damontre Moore returns from a two game suspension and he could impact this defense immediately.

Moore was one of the players that stood out the most in preseason games and even had two sacks. Now that he is back, I really want to see him on the field at the same time as Lawrence.

If both combine for three sacks or more, we can't ask for a better sign for this pass rush.

Dez Bryant will play his 100th career game against the Arizona Cardinals on Monday Night Football.

Just like with Dak and Zeke, media and fans around the league have slandered Bryant after just two weeks of the 2017 NFL season. Dez has had two busy weeks, featuring two tough CBs. First Janoris Jenkins, then Aqib Talib and now… Patrick Peterson.

Peterson may not be in his prime, but he still is an excellent cornerback. Dez Bryant will face his third straight challenge in 2017.

Dez Bryant had 7 catches for 56 yards and a TD vs. Denver. Here's what the Broncos did to the top WRs last year: pic.twitter.com/hL2H3pG30W

Dez Bryant still is a great receiver though, and I don't think it's fair to say he isn't good anymore.

If Dez outplays Patrick in a few plays, and Dak is able to get back to his normal self and find him… 88 will have his first of many great performances in the season.

Wish #5: Jourdan Lewis Has Another Interception

Jourdan Lewis missed every preseason game and was able to wear the Dallas Cowboys uniform for the first time against the Denver Broncos. As we know, it wasn't the best game ever, but Jourdan Lewis had his first career interception in his first game.

When the Cowboys drafted him and Chidobe Awuzie this is what they wanted. Takeaways.

Nolan Carroll and Awuzie have been ruled out for tomorrow's game which means Jourdan Lewis will see the field a lot.

It's been a long week. Truth be told, the Cowboys aren't a team that should be losing the way they did at Denver. But this is the NFL, and it happens. And what matters is how teams react to it.

I truly believe tomorrow's game will be a very important one for the Dallas Cowboys. It is not a divisional game or anything, but we will learn a few things about this team. Will they be angry and make Arizona pay for it?

If they want to be Super Bowl contenders, they better be able to bounce back from moments like this. Even still, the main wish remains… just win.

Mauricio Rodriguezhttps://www.facebook.com/PrimeroCowboys/
I love to write, I love football and I love the Dallas Cowboys. I've been rooting for America's team all the way from Mexico ever since I can remember. If you want to talk football, I'm in... You'll find me at @MauNFL.
Previous article
A Dallas Cowboys Guide To Sunday’s NFL Week 3
Next article
Breaking Out: Will DeMarcus Lawrence Become Too Expensive for Cowboys?

In a normal league year, the Dallas Cowboys would have concluded the regular season at this point. The lasting taste in the mouth of...
Read more

Good stuff brother. I’m all about the big win this week, but I’m with you in the “just win baby” department. If they can start the season 2-1 that’s a great start. It’s where we were after three games last season. Still a lot of football left to play.

I just saw your comment while watching the game. This is intense.