We've all had a very fun week as our Dallas Cowboys opened their 2017 NFL season 1-0. It's an awesome feeling, and no one can deny it. But right now, the happiness of beating the New York Giants for the first time since 2015 is slowly fading. It's time for week 2. And Dak Prescott and company are ready to take on the 1-0 Denver Broncos.

Even though the Cowboys took the win home last Sunday, Cowboys Nation wanted to see more. It always happens, there's nothing wrong with admitting that. Yeah, we love getting the win, and that's the only thing that matters. But every week, we always have a few wishes for our team. Sometimes they deliver, sometimes they don't.

Here is my wishlist for today's game, I invite you to share yours in the comments below!

Wish #1: Chemistry 101: Dak and Dez Connect With Each Other

Dak Prescott was sensational as a rookie in 2016. We know the story, a fourth-round rookie who led the most valuable franchise in sports to the #1 seed in the NFC.

Dak was able to find WR Dez Bryant in some big plays in 2016, but the duo could improve a lot. Throughout the offseason, we talked a lot about Dak developing a special chemistry with Dez after a year of practicing together.

We saw it in some preseason moments, but we didn't see it last week against the Giants. I believe 100% that Dak and Dez will be a bigger threat than last year. They're ready. The rest of the NFL isn't ready for this duo.

I wish these two players show the world how hard they've been working to get that chemistry going. And do it against one of the league's top defenses.

Wish #2: Ryan Switzer Returns One To The House!

The fact that Ryan Switzer was a fourth-round pick mattered little to Cowboys' fans. He was easily the Cowboy rookie with the most hype around him after the Draft. He's a good player, has an awesome personality, and he is looking to become a quality returner specialist for Dallas.

Earlier this week on Inside The Star, I wrote about Switzer's debut vs the Giants. He wasn't ideal. He showed us he is still a rookie. But the traits are there, and he showed us he is willing to do whatever it takes to house one. Even if it means not calling a fair catch and trying to get away with it.

Switzer returns a kickoff or a punt for six in what will be his second career game.

But still, we can't deny that DeMarcus Lawrence was pretty awesome at getting after Eli Manning a week ago. He ended the night with two sacks, and was pressuring the QB consistently all game.

This time, he will face Denver Broncos RT, Menelik Watson. Watson struggled with Melvin Ingram last week. Lawrence is probably not on the same level as Ingram, but if he plays the way he did versus the Giants, he might end the night with two or more sacks. 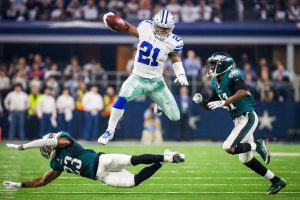 Let me start off by saying something. Ezekiel Elliott is by far, the best pure runner this league has right now. And even though he led the league in rushing yards last year, he never had 200 rushing yards in a single game.

After one season of playing pro football, that is about to change. With the Cowboys going up against such a good pass defense, the key to the game will be controlling the clock. That means Ezekiel Elliott will be fed.

Tired of the off-the-field drama, Zeke burns some steam running for more than 200 yards today against the Broncos.

Wish #5: A Safety Helps With An INT

A week ago, in order to remind Ben McAdoo who is playing CB for Dallas, Anthony Brown picked off Eli Manning. Now would be a fitting time to let the world know who the Cowboys' safeties are.

Anyone who knows football knows Byron Jones is a good player. He has only one interception on his career (which came on a Hail Mary pass), but he is still the second most important player on this defense, behind Sean Lee.

Byron Jones could make a statement by intercepting a Trevor Siemian pass.

Jeff Heath has had his share of interceptions wearing a Cowboys uniform. It would be nice to see him get one more, this time as a starter.

Pass rush, CB play and S play would make for a great day for this Dallas Cowboys team.

We'll be doing this weekly here on Inside The Star, so if you have any wishes you'd like to see on this series, make sure to tweet them at me!

The Landry Trophy here has a very good wish. Let's root for a combo and include the safety pick I mentioned before… or let's just root for any kind of turnover and the win. Maybe that's easier.

Love Christopher's wish. We all want to see Chaz Green remaining healthy. If he does that, he is a quality LG.

They say great minds think alike, and Bobby called the 200 yards for Zeke before reading this article. Zeke shall be fed, then.

Mauricio Rodriguezhttps://www.facebook.com/PrimeroCowboys/
I love to write, I love football and I love the Dallas Cowboys. I've been rooting for America's team all the way from Mexico ever since I can remember. If you want to talk football, I'm in... You'll find me at @MauNFL.
Previous article
Cowboys at Broncos: Writers Give Their Takes on #DENvsDAL
Next article
#DALvsDEN Week 2 Inactives for Cowboys, Broncos

The Cowboys played their first preseason game Saturday against the Denver Broncos, and guess what? Penalties were one of the most significant takeaways.  It's preseason,...
Game Notes

The Dallas Cowboys play their first of three preseason games this Saturday, as they open up against the Denver Broncos in the Mile High....

Thank you! We’ll be doing this weekly. If you have any wishes for next game, make sure to tweet them @PepoR99 and I’ll include them!