That was one long bye week. Not only did we have to survive to the aftermath of a heartbreaking loss to the Packers but Nolan Carroll was released, Stephen Paea decided to retire, NaVorro Bowman was set to visit the Cowboys before signing with the Raiders and the Ezekiel Elliott drama was on full effect.

But today, we get back to football! Actual Dallas Cowboys football!

The Dallas Cowboys are in San Francisco to play the 0-6 San Francisco 49ers. It's a bigger game than what it appears to be, as Jason Garrett and his team try to turn their season around.

Right now, Cowboys Nation is just anxious to see this team on the football field. It's been a difficult wait. We deserve a win. We want a win… and a few other things as well, if it's not too much to ask. Let's get into this week's Dallas Cowboys Wishlist!

The 49ers will start C.J. Beathard for the first time in his career. The rookie out of Iowa will be looking to give his winless team the spark they need on offense. Brian Hoyer will be watching from the bench.

To be fair, I think playing Beathard is the right call for San Francisco. However, he is a rookie. And with a struggling defense, the Cowboys will try to boost their confidence welcoming him to the NFL.

I expect to see a lot from Jourdan Lewis and the rest of the secondary. This group is full of talented, young, athletic players and they just need to develop as the season continues. Playing against a rookie, getting two or more interceptions would be huge for these guys.

Even though the lack of a pass rush has been haunting our dreams for years now, linebacker has arguably been the biggest problem for this defense. Currently, Jaylon Smith isn't 100% ready to go and with Hitchens and Lee suffering injuries at different times, he's been forced to be on the field as a starter.

However, 50 and 59 will be healthy today and I expect to see a lot more from them and a lot less of Jaylon.

I think the Cowboys' linebackers will have their best game of the season yet. Lee is the most important player on that defense and Anthony Hitchens is pretty underrated.

I wish they hold Carlos Hyde and the 49ers running game under 60 yards today and hope to see a few big plays from their part.

Wish #3: Ezekiel Elliott Is Fed, Runs for More Than 200 Yards

We are all tired of hearing about all of the legal talk surrounding Ezekiel Elliott. I can't imagine how it's like for him.Today, I wish he goes out there and forgets everything for a while and destroy the 49ers defense. 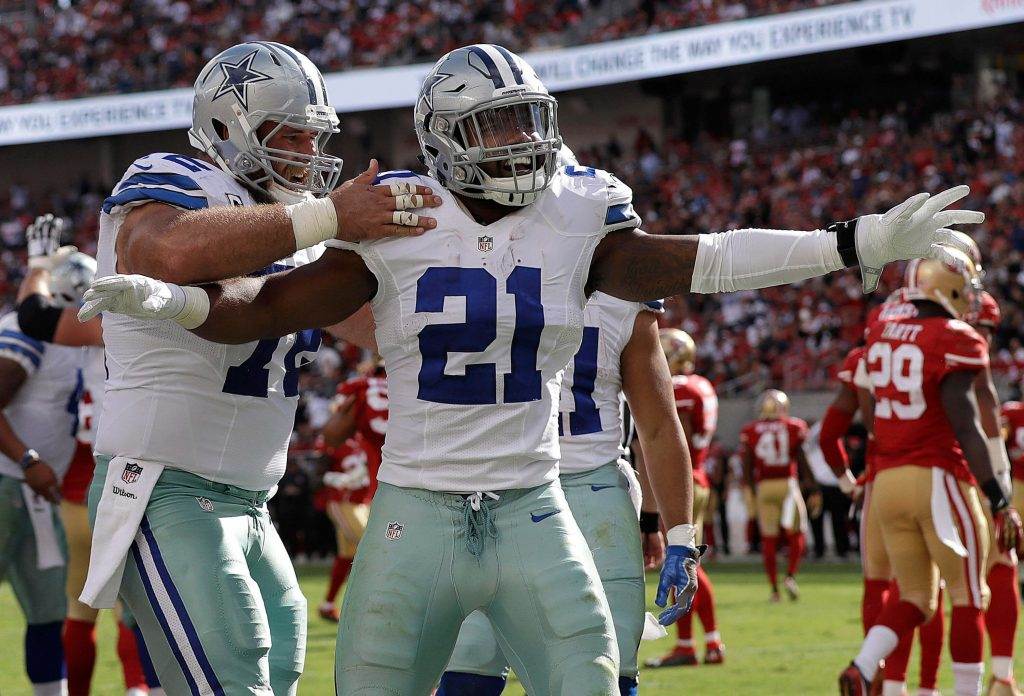 Zeke has been better than what many fans are giving him credit for this season. Sure, he probably has been distracted with all off his off-field stuff right now. Who can blame him? What is true though, is that he is yet to put on a 4-quarter long impressive performance.

With all of the Cowboys team looking to get their third win of the season and start making things right, I'm ready to see Zeke having his first 200 rushing yards game.

Dak Prescott is still a great football player. Yes, even though a lot of people want to convince you otherwise. In fact, he hasn't regressed from his 2016 form. It has been a difficult season, but Dak isn't on a sophomore slump. I think it's time to stop confusing the fact that the Cowboys are having a bad season as a team with the idea of “Dak is not good anymore.”

Having said that, my fourth wish of the week includes Dak running for an heroic touchdown.

This is the second Cowboys game of the season that has a feel of turning things around. The first one came against the Arizona Cardinals and when the team was struggling early in the game, Dak Prescott had his best moment of the season.

It would be awesome if he has that kind of moment once again and gets this offense going.

Every week, it's all about winning. It doesn't matter if it's ugly or if it isn't, the objective is to just win.

Even still, my final wish this week is for this team to win comfortably. San Francisco is a win-less team. However, they have kept just about every game very close. With the Cowboys looking to make a statement, it would be nice to see a dominant performance.

@PepoR99 I wish dak to get 2 pass td and a rushing td, zeeke 1 rushing td as well

Give me all of the touchdowns! This offense should put more than 20 points on the board today, so I think it's fair to say this wish is probably coming true.

Mauricio Rodriguezhttps://www.facebook.com/PrimeroCowboys/
I love to write, I love football and I love the Dallas Cowboys. I've been rooting for America's team all the way from Mexico ever since I can remember. If you want to talk football, I'm in... You'll find me at @MauNFL.
Previous article
Cowboys at 49ers Staff Picks
Next article
By the Numbers: Cowboys at 49ers