After playing two consecutive games against division rivals, the Dallas Cowboys will finally get to play an opponent outside their own division Sunday night when they square off against the Chicago Bears in a primetime matchup at AT&T Stadium.

This will be John Fox's first trip to AT&T Stadium as the head coach of the Chicago Bears, and the first time the two teams have played in nearly a decade without Matt Forte as the Bears starting running back.

The Cowboys and Bears both had disappointing 2015 seasons and are hoping they don't suffer the same fate in 2016. Dallas finished with a disappointing 4-12 record and Chicago didn't do much better finishing last in the NFC North division at 6-10.

If both ball clubs expect to have a better 2016 season they have to start taking advantage of key matchups each week throughout the year.

Below are the matchups that I think the Dallas Cowboys need to win in order to come away with a victory Sunday night.

Rookie running back Ezekiel Elliott has improved from week to week and I think he will actually benefit from the Week 3 matchup against the Chicago Bears.

The Bears are having to deal with a rash of injuries on the defensive side of the ball. Linebacker Danny Trevathan and outside linebacker Lamarr Houston won't be suiting up Sunday night due to injuries and that is good news for the Cowboys running game.

I personally wouldn't be surprised if Elliott has his first career 100 yard rushing game, which would almost double his total rushing yards for the first two weeks the season.

Look for #21 to have a be game against the Bears in primetime Sunday night.

There is absolutely nothing about the Bears secondary that leads me to believe that the Dallas Cowboys wide receivers shouldn't be able to have a big game.

Cole Beasley and Dez Bryant have really been the only two WRs to have any kind of impact for the Cowboys offense the first two weeks of the season, but maybe this is the week where we finally see Terrance Williams or Brice Butler make some plays.

Quarterback Dak Prescott should have no problem finding open receivers and I think he will finally throw his first touchdown pass in the NFL.

The Chicago Bears would be wise to attack the weakest link on the Cowboys offensive line, and unfortunately that is Doug Free.

Free has not been playing very well so far in 2016 and lucky for you, fellow Staff Writer Kyle Brady recently did an excellent job breaking down #68's play so far through the first two weeks of the season. So, you can see for yourself where he is struggling.

Leonard Floyd maybe just a rookie, but he could give Free fits due to his length and speed. Floyd is a slippery pass rusher and that could make for a long night for Free if the two players face off against one another.

Doug Free usually struggles with power rushers, but I personally think Leonard Floyd is the type of player that will give Free all he can handle Sunday night. Morris Claiborne has really been playing well the first two weeks of the season, and because of that I think we might see him shadowing the Chicago Bears best receiver, Alshon Jeffrey.

Jeffrey has really been the only bright spot for the Bears offense so far in 2016, but he has been limited this week in practice and might not be at 100% Sunday night.

I would love to see Claiborne shadowing Jeffrey, but even if this doesn't happen I think Claiborne has a really good chance of getting his first interception of the 2016 season.

It's something I recently discussed in my weekly Martin 5 article. If you haven't gotten a chance yet, go and check it out.

Battle in the trenches

The Dallas Cowboys defense could have a new look along a defensive line. I think we got a brief glimpse of what the DL might look like last week against the Washington Redskins when they decided to play four defensive tackles in the final minutes of the game.

Don't be surprised if you see Tyrone Crawford lining up at DE with rookie defensive tackle Maliek Collins taking over the 3-technique.

Whoever plays along a defensive line should be licking their chops because the Bears offensive line is last in the NFL in pass protection. Look for the Cowboys to pressure the QB all night because of this.

Because the Chicago Bears are so poor in pass protection so far in 2016, I expect them to try to put more focus on the running game, especially with Jay Cutler out of the lineup.

The Bears starting running back, Jeremy Langford, is a physical downhill runner much like the Cowboys saw in week 1 against the New York Giants when Rashad Jennings was able to find some success.

Langford hasn't been spectacular by any means the first two games of the season, but he has been able to find the end zone both weeks.

I think Sean Lee is the best bet on the Cowboys defense to contain Langford and I think he will have a big game against the Chicago Bears Sunday night.

Do you agree or disagree with these key matchups?

Don't be shy. Take advantage of the comment section below to provide your thoughts and opinions on this topic. 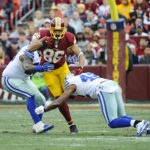 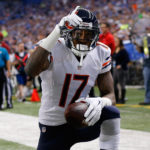