With plenty of season left to go in 2017, Cowboys' stars Dez Bryant and Jason Witten could finish the year as the franchise leaders in receiving touchdowns. For Bryant in particular, one big day could move him to the top of the list.

Here are the current standings in the Dallas record books:

That top four won't be getting cracked anytime soon. Terrance Williams is the closest active player with only 20 receiving touchdowns.

Jason Witten only needs one touchdown catch to break his tie with The Playmaker. Already the franchise leader in receptions and receiving yards, Witten has a good shot at passing Hayes this year and almost certainly if he returns in 2018.

That said, Dez Bryant will make it hard for Witten to claim the spot in yet another franchise receiving record. Already four touchdowns ahead of Jason, Dez should become the franchise leader within just a few more games. It could even happen today; Bryant exploded for 132 yards and two touchdowns in the Cowboys' last meeting with the Packers.

However it plays out, it's nice to see our favorite Cowboys building on their legacies with the franchise. 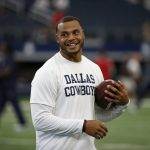 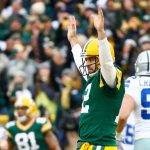