After a poor performance in the game that eliminated the Dallas Cowboys from playoff contention, Dez Bryant has been one of the most talked-about players in Cowboys Nation. Understandably so. Coming into the season, our expectations around the chemistry we all thought Dak Prescott and Dez Bryant had developed were too high.

The truth is, they don't have said chemistry. The Cowboys found that out the hard way this season, as the passing game never got to be “good enough.” Now, questions arise. Should Dallas get rid of Dez Bryant and his $70M contract? Is it all his fault? Is it all Dak's fault? What about the scheme, does he fit in this offense?

I will say this. As a young fan, Dez Bryant became one of my favorite players when watching the Cowboys play every Sunday. His passion, his big catches and the amazing moments he and Tony Romo made possible were captivating for me.

Dez still has his moments every once in a while, though. His record-setting touchdown against the Redskins was one of them. His 50-yard touchdown catch versus the Giants was another one. But when you realize how many passes he's dropping, how many times he fails to get open… it gets tough. Last week, he wasn't able to catch a ball that despite not being a perfect pass, hit both of his hands and ended up being tipped in the air and intercepted by Seattle.

Earlier, he fumbled in a crucial moment of the game. It has come to a point in which we have to question, is Dez even worth the money he is being paid? I truly believe that he isn't.

The first thing that people argue at this point, is the fact that Dak Prescott is not the kind of QB who will throw a contested ball, which is where Dez excels. Well, they're right.

Dak has a long way to go. I think that Prescott, despite having a tough season, is the guy who will lead Dallas for a long time. This wasn't his best season, but at the end of the day he's a second year QB who missed his superstar RB for six games, almost got killed by his backup left tackles, and saw his defense crumble to pieces without Sean Lee. He's the future. Yes, he deserves a big part of the blame. His play this year was far from great. That doesn't mean it's the end of his career though. It doesn't mean that the Cowboys have to move on. He's an NFL quarterback. It takes time. There is a learning curve.

Which naturally brings us to the inevitable Tony Romo mentions.

“He was good with Tony, so that means the problem is Dak, not Dez”, some say. I understand that. Failing to recognize that Dak doesn't take the risks Romo once did would be foolish.

However, look at DeAndre Hopkins. Look at Larry Fitzgerald. The guys who throw them the ball are not even close to being “special QBs”. Yet they continue to be elite WRs. Year after year. As I said before, I was once a huge Dez Bryant fan, but he's far from a top WR right now. Is it possible that his chemistry with Romo was actually that good?

It's been 21 straight games without more than 100 yards for Dez. I don't care who's throwing him the football, if he really was an “elite WR”, he wouldn't be struggling this much. It's ridiculous.

Last year, it looked like Dez was still a very good receiver stuck with a rookie QB who wasn't taking many risks. Right now it just feels like Bryant isn't as good as before. It feels like the Cowboys could do better.

Number 88 had a lot to say on Wednesday when he met with the media, and frankly I don't know what to make of it. While Bryant is trying to offer reasons as to why he hasn't played at the level he's supposed to be, the only thing I can see are excuses.

Dez Bryant said he had been bothered by tendinitis since early November. Said he was surprised no one knew. It has never appeared on Cowboys injury report and he hasn’t spoken about it until Wednesday.

This is what stuck out to me the most. Really? He's been injured since November and this is the first time we hear about it? NFL teams actually don't mind players being in the injury report because it messes with opposing teams' game-planning, but somehow we never heard of this? 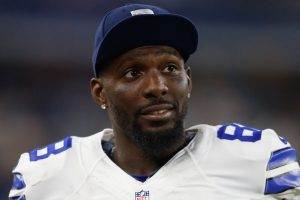 At times, it feels like it's always something with Dez. There's always an injury we haven't heard about. Maybe I'm getting carried away, but I'm not buying it. I don't think an injury is the reason for his declining production.

Dez also mentioned that he planned to talk to Jerry Jones about the scheme. What? Shouldn't he be talking to his coach? What does he want to talk to Jerry about? I mean, I don't think his fumble and his drops last week had anything to do with a scheme.

I'm aware of his talent. I'm aware of the fact that he may just shake it all off and be the awesome WR he once was as soon as next year. He's a passionate player and things get on his mind. You don't know when he'll bounce back. From one second to another, his level can change completely.

But when you're paying a player the amount of money Dallas is paying him, is it worth it? Is it worth not knowing if he'll ever get back to being the amazing play-maker as before? Is it worth it if “things can get on his mind” in one of the biggest games of the season, an elimination game?

The Cowboys will need that cap space soon.

David Irving, Zack Martin, DeMarcus Lawrence and Anthony Hitchens are just a few names that this front office will have to look at pretty soon. Maybe the Cowboys should do something about Dez. At this point, I think he either takes a pay cut or he stops playing for the Cowboys.

I can't believe I'm saying this after years of idolizing him, but I wouldn't mind if Dez played his last game with a star on his helmet this Sunday. It's the scheme, it's an injury, it's things getting in his mind… or is it just excuses for a guy who isn't the same wide receiver he once was?

Mauricio Rodriguezhttps://www.facebook.com/PrimeroCowboys/
I love to write, I love football and I love the Dallas Cowboys. I've been rooting for America's team all the way from Mexico ever since I can remember. If you want to talk football, I'm in... You'll find me at @MauNFL.
Previous article
Cowboys Coaching: Who Needs Improvement When “Not Good Enough” Suffices?
Next article
Nothing Left to Gain for Cowboys Starters in Week 17

Even when Dez was good he dropped
Passes. I love the cowboys but its time to find us a new #1 no room for a crying baby
Making excuses blaming someone else U have disgraced the #88

To me, it’s hard to think this way of a player who was always one of my favorites. Sadly, it may be time for him to part ways with the Cowboys. Thank you for reading.

Dez has no one to blame but himself. He might want to take a lesson from his quarterback who never has nor ever will make excuses. Our Dak’s work ethic is something that would behoove others to follow. I cannot wait until next season when hopefully our Dak isn’t running for his life and can have time to complete passes to his receivers who darned well better be ready to catch them. #Dak4 #HailState

Dak needs to keep the Mississippi State Dak from rearing its ugly head. Dak needs to continue to work on his accuracy and anticipation, if he wants to lead this team, out of NFL Purgatory of mediocrity , to hoisting the Lombardi Trophy.
Hopefully, the Cowboys will bring back Quarterback whisper Mark Sanchez, and hire Jon Kita, as a Quarterback quality control specialist , to work with Dak, away from the coaching staff, to enhance Dak’s weakness into a strength, such as accuracy and anticipation.

Dak’s development must certainly improve. I’m convinced he’ll be a good QB down the road. Despite a tough season, I’m sure he’ll be fine.

Huh? Mark Sanchez? Why would he need advice from a bad QB? I’d understand getting advice from Romo since he knows how to work this offense and is a student of the game. There’s no way I want Sanchez close to Dak. Now Kitna.. that’s not a bad idea. That dude always played with passion and heart. I actually would like Kitna on the sidelines.

Great Article. I wholeheartedly agree with your assessment of Dez. Despite his being in denial, he is a shell of himself. I can’t believe that Jerry [rose colored glasses] Jones, still believes that Dez, still have the juice, after watching Dez, the past 3 seasons. Dez, hasn’t been the same since breaking his foot and coming back too early to play in 2015. I think it was Rodney White, of the Atlanta Falcons, that warned Dez, about taking the rest of the season off, instead of trying to play on a broken foot, and that it would take sometime to getting back to the norm.

We’re now seeing the results of that decision that Dez made in 2015.

It’s been a tough stretch since signing that contract. Let’s hope things turn out for the best, you bring up an interesting topic about his early return in 2015. Thanks for reading!

Dez is not worth what his contract suggests. His skills have diminished to the point he gets irritated and starts looking for excuses. He is getting more like TO got toward the end of his career! I believe it is time for the Cowboys to move forward without him in their future. Can he still make a great catch occasionally? Of course he can, but not consistently.