If one thing is constant for a Cowboys defense that came into this 2017 season with an abundance of new faces, it is that LB Sean Lee will always be critical to this unit’s success. A day removed from allowing 412 total yards and 6.37 yards per carry in the second half to the Rams at home, dropping to 2-2 with the 35-30 loss, the Cowboys went through these defensive growing pains for the first time without Lee this season.

As Jared Goff and Todd Gurley got going, this disappointment from AT&T Stadium felt inevitable for a Cowboys team that was so thin at LB on the afternoon. Sean McVay may be the youngest head coach in the NFL, but the Cowboys should be at the forefront in understanding his offensive prowess – joining Los Angeles by way of the Washington Redskins after helping Kirk Cousins and Washington consistently challenge Dallas since 2014 (when he took over as offensive coordinator).

McVay’s Rams attacked the middle of the field tirelessly against the Cowboys’ defense, where not even Jaylon Smith was up for the challenge of running with the likes of Cooper Kupp and Todd Gurley.

Sean Lee has made a Pro Bowl career out of effortlessly carrying running backs in the pattern, scraping on blockers to stop the run, and ultimately keeping Rod Marinelli’s defense together.

Without him, Marinelli had no answers for a Los Angeles attack that was never knocked off of their schedule – comfortably rushing the football against soft boxes and slinging it against bigger fronts with no speed at linebacker on the field to support them.

Myself included, you would be hard-pressed to find a draft scout that did not have Jared Goff as the best quarterback in the 2016 class. Beginning to hit his potential in an offense that suits him, while paired with a dynamic back in Gurley who foreshadowed his own success against the Cowboys yesterday, Goff’s Rams should be taken seriously as a threat in the NFC West – something the Cowboys understood in the first half. 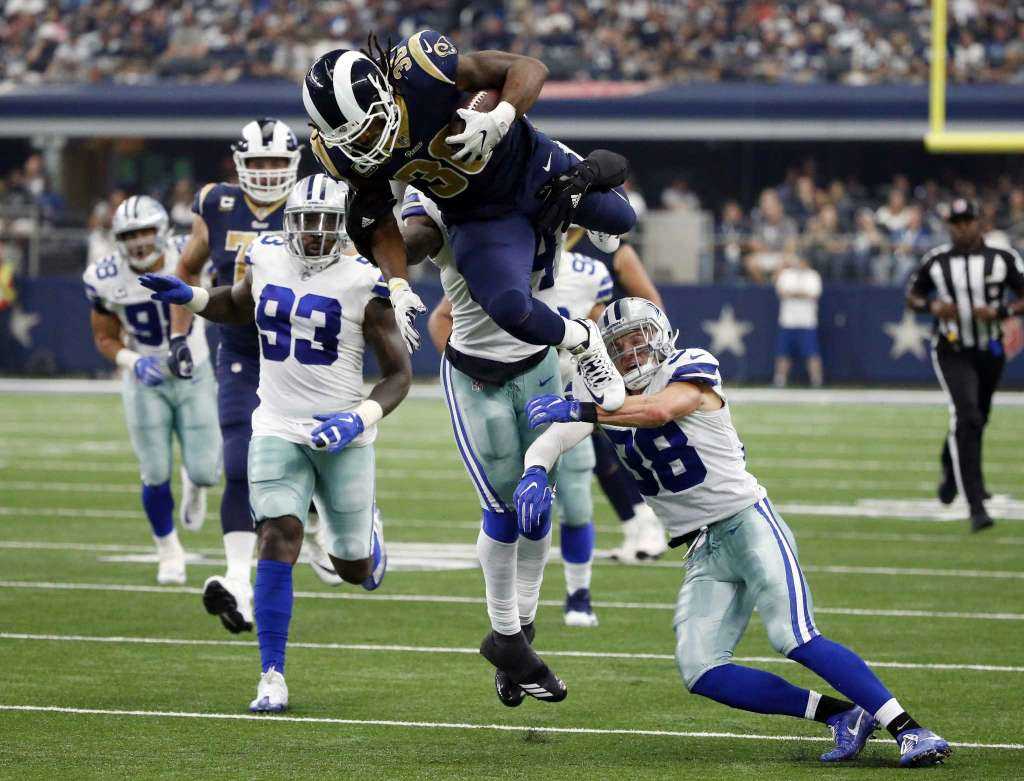 A bad half of football without Sean Lee does not nearly define the 2017 Dallas Cowboys or this defense, and it would be foolish for Cowboys Nation to say that flaws on this side of the ball were not expected at this point in the season – if not the entirety of it.

Before digging into the tape, these issues outside of the linebacker position once again included the pass rush off the edge and the Cowboys’ rotation of safeties.

While the secondary was likely put in the toughest spot yesterday in Lee’s absence, the lack of pressure generated from the defensive line remains inexcusable.

Fresh off of a Thursday night victory, Aaron Rodgers and the Green Bay Packers roll into town next Sunday to face a Cowboys defense that will need Sean Lee to have a chance.

At the very least, lining up with #50 on the field will give the Cowboys an opportunity to properly evaluate their defense moving through the second quarter of this season. Through one quarter, there are more questions than answers on both sides of the ball for the Dallas Cowboys – with nothing but a first place schedule ahead of them.

Assuming “The General” is ready to lead the Cowboys defense once again, will anybody else on the front seven step up, and will any of it really matter in week five?

Tell us what you think about “Does Cowboys Defense Deserve Pass In Sean Lee’s Absence?” in the comments below. You can also email me at Sean.Martin@InsideTheStar.com, or Tweet to me at @SeanMartinNFL!