Can the Dallas Cowboys be a perennial Super Bowl contender with Dak Prescott at quarterback? Prescott fell from the heavens into the Cowboys' open arms in the wake of Tony Romo's preseason back injury. And while the reigning NFC Champion Atlanta Falcons have a Super Bowl hangover, the Cowboys feel their quarterback is just getting started.

Dak Prescott, the 2016 NFL Associated Press Offensive Rookie of the Year, led the Cowboys to a 13-3 record, NFC East crown, and the number one seed in the conference before being bounced from the playoffs by the Aaron Rodgers and the Green Bay Packers.

Despite this depressing playoff exit, there seems to be no reason to expect Prescott to not have the Cowboys in position to make a Super Bowl run as soon as next season. In the mind's of most people, Prescott has reset the Cowboys Super Bowl window. A fourth round rookie, Dak has shouldered the pressures of playing quarterback for the Cowboys while remaining poised and focused.

On the biggest stage Prescott has played his best football. While the Cowboys may have lost to Green Bay, Dak did his part from the beginning, throwing for over 300 yards and 3 touchdowns while bringing the team back from a huge deficit. Twice Dak put the offense in position to tie the game, and bailed out a defense which let him down for much of the first half.

Earlier in the season, while questions swirled about whether Dak should permanently replace franchise quarterback Tony Romo, Prescott remained unfazed. Keeping his cool and continuing to perform, Dak left head coach Jason Garrett with no choice but ride with him for not only the remainder of 2016, but also for many years to come. 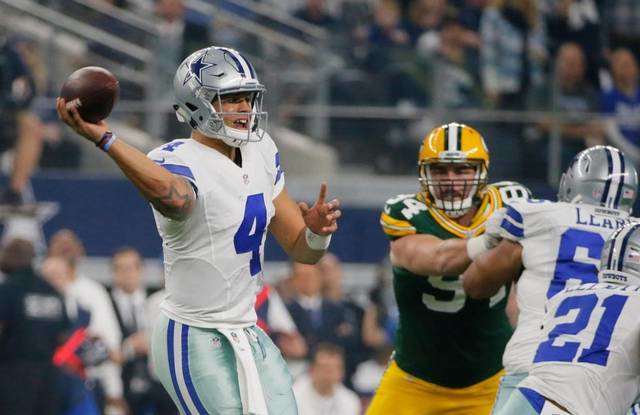 All signs seem to point to the emergence of another Dallas Cowboys dynasty, or at least something as close to that as imaginable. They have the quarterback in Dak, the running back in Ezekiel Elliott, the big play receiver in Dez Bryant, and the mammoth offensive line to anchor it all.

While questions can be asked about the defensive side of the ball, the return of Jaylon Smith from injury as well as the opportunity to draft an edge rusher from this incredibly deep 2017 NFL Draft class should make any fan giddy.

Less than a year ago we all would've thought the Cowboys Super Bowl window was closing. Sure, the front office had developed a fantastic young offensive line, but Tony Romo was getting older and more fragile, Dez Bryant had just missed virtually the entire 2015 season, and their defense continued to look suspect.

But after last year's draft haul, the Cowboys Super Bowl window is wide-freaking-open. Mostly thanks to their quarterback, Dak Prescott.

Kevin you hit the head of the nail. Could the Cowboys be the next New England Patriots, with Dak in the role of Tom Brady? Remember Dak stated at the Super Bowl in Houston, “don’t bet against Tom Brady “. It appears to me that Dak, is a very mature person for his age. It wouldn’t surprise me that since Dak had the same training as Brady. I wouldn’t be surprise if Dak, is tapping into Brady knowledge and wisdom, on how to be a successful quarterback in the NFL. The two of them was the only quarterbacks, that carried their respective teams from a 21-3 deficit in the post season, the rookie came up short, the veteran came up with the Lombardi.

Knowing that Dak is mentality is sound, like Brady. I wouldn’t underestimate Dak. He definitely has a chip on his shoulders, like Brady. Both was passed over, the veteran in the 6th round, the rookie in the 4th round. Both change their college # ,when they became professionals, the veteran from # 10- #12, the rookie, from #15- # 4. Could Dak, be the next chosen one, to re-sock the Cowboys Trophy case, to become the new face of the NFL, as well, as the Cowboys, or will Dak just be another one year wonder? Time will tell, and the clock for Cowboys Nation, is ticking….

Call me crazy but I think Dak is a fusion of Aaron Rodgers and touchdown Tom Brady, I say that because like Rodgers he doesn’t throw picks, great athlete who knows when to use his legs and like (young ) Tom Brady he wins, wins a lot, once he learns to read defense’s it’s gonna make the hate spewers infourious #CowboysNation

I think Dak is a fusion of Aaron Rodgers and Tom Brady. I say that because like Rodgers he has the mobility and dare I say throw power, and like a young Tom Brady, he just wins, once he’s able to read defenses successfully he’ll be even better