Just how good was Ezekiel Elliott in his rookie season with the Dallas Cowboys? To put his league-leading rushing performance into a new perspective, the recent buzz that Zeke could start 2017 with a one or two game suspension has plenty in Cowboys Nation skeptical of this team’s ability on offense without Ezekiel Elliott’s services.

Yes, these are the same fans that have spent nearly the entire offseason boasting about the dominance the Cowboys’ offense could be in store for in 2017 thanks to the progress of not only Elliott but QB Dak Prescott, the offensive line as a unit, and a deep WR pool that added two promising new rookies in Ryan Switzer and Noah Brown.

It is okay to be upset for a world of reasons that Dallas may be without one of the NFL’s brightest stars to start the season, but reaching for short-terms answers at RB completely loses sight of the fact that the strength of the Cowboys’ offense is their strength in numbers.

If called upon, the Cowboys have already shown veteran back Darren McFadden plenty of confidence by re-signing him following a bounce back from injury that saw the team move on from draft pick Darius Jackson to get McFadden onto the roster late in 2016.

In 2015 Darren McFadden of course started ten games – mostly without the luxury of playing with other difference makers around him – and rushed for 1,089 yards.

No combination of Alfred Morris, UDFA hopeful Jahad Thomas, or a sudden increase in spread personnel to account for a potential Zeke absence is the correct answer to how the Cowboys will approach winning games with or without him in 2017.

Darren McFadden confirmed in 2015 (doesn’t that season feel forever ago now?!) that the Cowboys could benefit greatly from maximizing the talent in the backfield to fully utilize their dominant offensive line.

Being in a perfect position to draft Ezekiel Elliott was not the move that made the Cowboys’ running game what it is, it was the move that made this team strength a legitimate way to win. A capable backup RB is still a vitally important position in Dallas thanks to the volume of carries available overall, and Darren McFadden has been slated into this backup role comfortably for a reason. 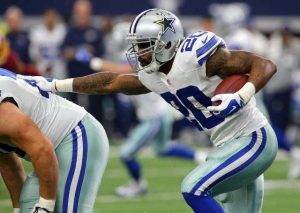 A complete back that has fully embraced the career resurrection that America’s Team has brought him, McFadden’s best trait with the Cowboys is that – on any given down and distance – he does not force the offensive play calling to get away from what they do with Ezekiel Elliott.

McFadden can do everything Zeke Elliott can do to an extent that keeps Dak Prescott and the Cowboys’ passing game ahead of schedule. He will hit the correct holes in the line with some burst and finish strong at the second level, occasionally showing off the extra gear to hit on big gains to the outside. DMC can also catch the ball smoothly out of the backfield and turn up field quickly to maximize every reception.

For a team fully expecting to play 18 games between September 10th and February, this role for Darren McFadden was always going to be embraced by the Cowboys and loathed by opposing defenses that will in fact have to deal with Elliott along with McFadden wearing into them for four quarters.

Two capable backs in an offense completely content on running up the miles on any RB’s tires is hardly a “luxury”, it is something the Dallas Cowboys need and have.

This team’s rushing attack will miss a beat in any game they play without Ezekiel Elliott, which is a greater compliment to his abilities entering year two than it is a criticism of the depth behind #21 – a depth chart meticulously built to allow the Dallas Cowboys to do what they do best.

Darren McFadden is going to have a major impact on just how far the Cowboys’ offense can take them this season, an offense that is still awaiting anything new on the status of their true bell cow back.

Tell us what you think about “Elliott Suspension Or Not, Darren McFadden Critical to Cowboys’ Offense” in the comments below. You can also email me at Sean.Martin@InsideTheStar.com, or Tweet to me at @SeanMartinNFL!