Last night, many of us waited anxiously for hours as Ezekiel Elliott’s injunction hearing took place in New York. You probably know what went down. If you don’t, here you go.

There will be a time to talk about Alfred Morris and Darren McFadden. But today’s not that day. I’m not ready to move on.

And yet I, just one of those millions of fans, still feel violated.

In all its efforts to “protect” an alleged victim, the NFL has assuredly victimized Ezekiel Elliott. Less importantly, it’s victimized every fan of the Dallas Cowboys. The league’s made it clear that its own public relations agendas and concern over its own power are more important than fairness and basic human decency.

While this asshat is the face of the evil, it goes well beyond Goodell.  He has advisers who tell him what’s in the best interest of the league. He has owners who prop him up because he’s their yes-man and scapegoat. They’re all part of the problem.

The curtain has been torn. The wall has been broken. The myth and magic of professional football has died.

As a young sports fan, and even many adult ones, you have the naive belief that you’re the most important person in the game. You put Troy Aikman and Emmitt Smith in the same category as He-Man and Luke Skywalker; real live action heroes made for your entertainment.

But if you get too much into the game, you start to realize how little you matter. It’s not about your cheers but your money.  It’s not about your love, but how you help boost TV ratings to mollify advertising partners. You’re only as important as the dollars and hours you spend helping fill the coffers.

Of course, this isn’t just about the league or the owners. Many of the players are also out there for money. This is why some people love college football and have no time for the NFL; the perception that professional athletes aren’t doing it for the love of the game and the fans. This is often exaggerated, but hardly untrue. Many players wouldn’t play if the money wasn’t so good.

Most have come to this realization and get over it, though. Maybe it’s not as mystical as when you were a kid, but that’s okay. You still love the game and seeing it played at the highest level. You love getting into free agency, the draft, and perhaps a few fantasy teams. It’s still highly entertaining, even once you realize your true place in the universe. 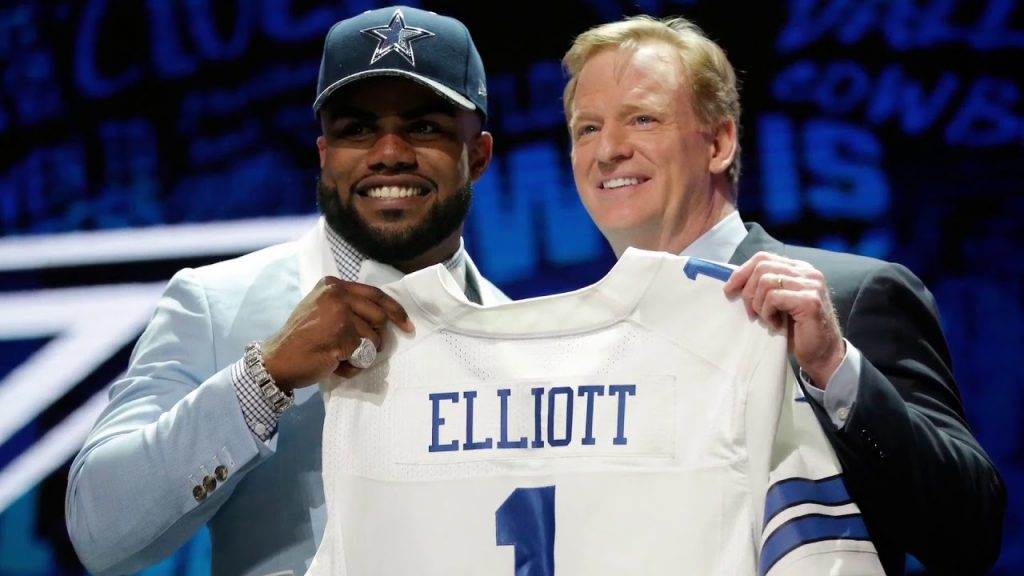 I can only speak for myself, of course. You may not feel the same way.

For me, what’s happened over these many months with Ezekiel Elliott and the NFL’s disciplinary process has shattered what was left of my naivety. Despite everything I understood about the cold, hard realities of professional football, I still believed that the league wasn’t out to completely screw its players. Even if it was politically or otherwise advantageous for the NFL, I never thought they’d go this far.

The NFL never cared about Tiffany Thompson, just like they don’t care about you or me. They saw an opportunity to try to regain some ground on the domestic violence landscape. They thought they could use another star running back to make up for all the mistakes they made with Ray Rice.

This was never about whether or not Zeke actually committed domestic violence. That was made clear by how little the league seemed concerned with Thompson’s testimony or the full facts of the case. It’s been painfully obvious for some time that everything the NFL’s done was to put the teeth back into its own botched domestic violence policy.

The NFL screwed up with Rice and Josh Brown. They decided on lenience in cases far more clear-cut than Elliott’s, undermining their own policy. They created their own problem and tried to use Zeke’s fame to fix it.

But Zeke’s case isn’t just flimsy. There is documented proof that Thompson prompted friends to lie in her favor. At times it reads like the case from To Kill a Mockingbird, a white woman lashing out with a false accusation to spite her former romantic partner. She even told Elliott that nobody would believe him, a black man, over her.

This is ugliness. This is dark, nasty human reality; personal and painful.

And the NFL is trying to turn it into a billboard. 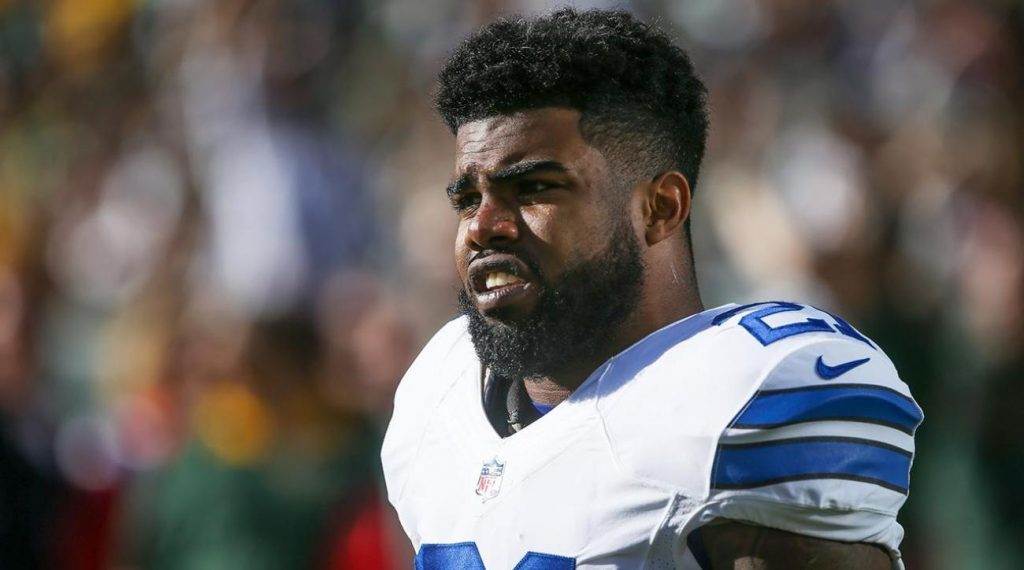 We aren’t talking about a blown call on a Dez Bryant catch anymore. This isn’t incompetence or a bad rule. This is a man’s name and life being severely harmed over corporate agendas.

It’s astounding that the NFL could take the stance it has against Elliott. While it is the union’s job to protect players, the NFL is supposed to protect the game as a whole. The players are part of that game, and the most important part when it comes to public reception. They are the conduit to the fans.

The league didn’t even have to be on Elliott’s side here. They just had to be neutral! They just had to be fair. But no, they went all in on an accusation and tried to turn one of their brightest young stars into an advertisement for how much the NFL cares about domestic violence.

Injustice is hardly new in society, but sports are supposed to be our escape from the negativity in the world. They’re supposed to be entertainment, not another battlefield for the same social and political warfare that’s going on all around us.

Roger Goodell and his camp have destroyed the NFL’s role in American society. Football Sunday is no longer a time to get away from life’s problems. For some, it may now be your greatest source of frustration.

Owners seem to finally be waking up to how poorly Goodell’s reign has gone. The financial increases were organic and would’ve happened under any commissioner. What he’s had a truly personal role in has almost all gone poorly. The NFL’s public image is far worse now than when Roger Goodell took office.

Jerry Jones appears to be at the forefront of a movement to at least limit Goodell’s power, if not remove him completely. There is talk of conference calls and meetings between a group of owners concerned about moving forward with the current power structure. Perhaps Roger’s role as the league’s scapegoat will ultimately lead to his dismissal now that he’s the face of the incompetence and corruption.

We have to hope the owners can do something, because we certainly can’t. As much we like to think fans matter, the NFL will keep on rolling along even as ratings decline. It will still be the most-watched product on TV for some time; it has a wide cushion before true financial trouble comes. 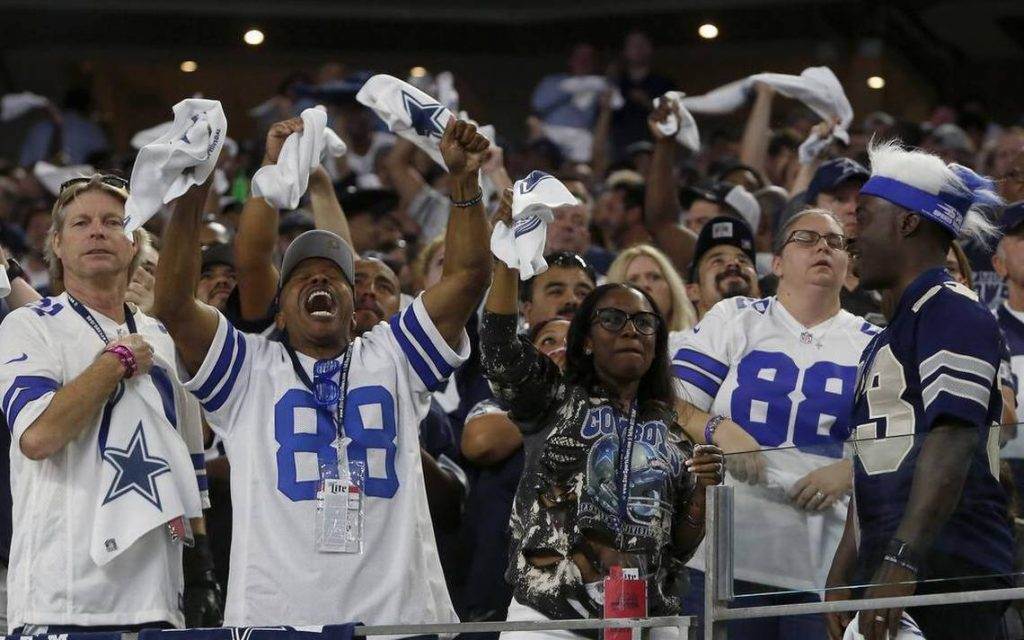 Cowboys Nation… I don’t know what to tell you anymore.

The NFL is what it is now. It’s the Roman Empire, already peaked and now starting to decline. New challenges with social and political issues and the CTE crisis will continue its erosion.

Desperate moves like what we’ve seen with Ezekiel Elliott are going to continue. Like an aging actress trying to stay beautiful, the NFL is going to keep looking for ways to cosmetically improve itself without being able to stop the inevitable. Some efforts will work and others, like its handling of Zeke’s case, will leave it looking like Renee Zellweger.

We each have to decide, as fans, how much we can deal with the botched jobs. When does our love of football finally get overwhelmed by our frustration with the league’s practices? When does the infiltration of the ugly realities of life finally take away too much of what makes football an escape?

For me, it’s closer than it’s ever been. Even though I know Ezekiel Elliott’s situation isn’t over, that he can still appeal and potentially win in the end, last night really knocked me back a few steps.

Of course, six games from now, he’ll be back. Maybe Dallas still makes the playoffs. Maybe 2017 ends on an amazing note. Maybe we’ll all forget about how awful we feel today.

But then again, maybe we shouldn’t. I will never forget the line from “Boondock Saints:”

“Now, we must all fear evil men. But there is another kind of evil which we must fear most, and that is the indifference of good men.”

If we just put all this behind us and keep on cheering, who are we? What are we? If we just shake our heads and move on, aren’t we giving the NFL exactly what it wants?

I don’t know what the alternative is, or if there is one. Stop watching football? Boycotting? I’m not here to tell you that’s something to do. I doubt I’d do it myself.

But it’s the fact that I’m actually now using those words, considering those options, that tells you exactly how perilous the NFL’s situation is. I’m a fan in southwest Virginia with no real local ties to an NFL team, yet still doggedly loyal to one of its franchises. I promote its product through online activity out of passion for the game, not any significant financial incentive.

Now I’m starting feel like part of the problem, too.

The NFL is clearly going to keep making decisions based on its own agendas, players, fans, and even fairness be damned. It doesn’t love me. Why should I love it?

Emotions can turn quickly. Our deepest loves can become our strongest hates. Football has been one of my greatest loves since I was old enough to understand it.

Now I’m older and I understand way more than I ever wanted to. And I’m starting to hate what I know.

And I hate Roger Goodell and the league for making me feel this way.