Has it settled in yet? The Dallas Cowboys added Ohio State running back Ezekiel Elliott with the fourth overall pick tonight in the NFL Draft!

Fans can brace for a dynamic offense with Zeke in the backfield, along with lofty expectations to follow. Elliott, who bursts with confidence in everything he does, appeared ready for these expectations when he came off the stage in Chicago to join Cowboys’ great Deion Sanders on NFL Network.

In this post-draft interview, Elliott declared:

“I’m coming to Dallas to win a Super Bowl”

Super Bowl expectations are nothing new for the Dallas Cowboys, as they entered this past season with such aspirations following that painful loss in Green Bay during the 2014 Divisional Playoffs.

I briefly addressed what went wrong for the Cowboys in 2015 when I announced Elliott as Dallas’ pick right here, but those things are well behind them now. The truth is that Tony Romo deserves to raise the Lombardi Trophy in his Cowboys’ career, and this pick was about helping him do just that.

The shiny new toy for Scott Linehan’s backfield is all on board and ready to roll. Is Cowboys Nation ready?

Tell us what you think about “Ezekiel Elliott Ready to Run: “I’m Coming to Dallas to Win a Super Bowl”” in the comments below. You can also email me at Sean.Martin@InsideTheStar.com, or Tweet to me at @SeanMartinNFL! 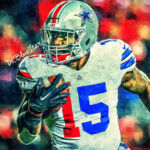