Nothing is set in stone just yet, but the likelihood of Ezekiel Elliott missing the next six games is at an all-time high. This news didn't sit well with a lot of Cowboys Nation and for good reason. This entire situation seemed like a witch hunt from the beginning, but there was hope Elliott would be exonerated and play the entire 2017 season. That doesn't seem to be the case now, but Elliott's suspension could end up being a blessing in disguise.

Now, I fully understand the mindset a lot of us have regarding Elliott's suspension. I've heard it all and probably thought the same way myself. You know, “Let's throw in the towel now because the Cowboys can't win without Elliott” or “Alfred Morris and Darren McFadden are more than capable of filling in during Elliott's absence”. But, I can promise you this. I truly believe the suspension is going to be a blessing in disguise.

But there is a catch. There always is. Right!? 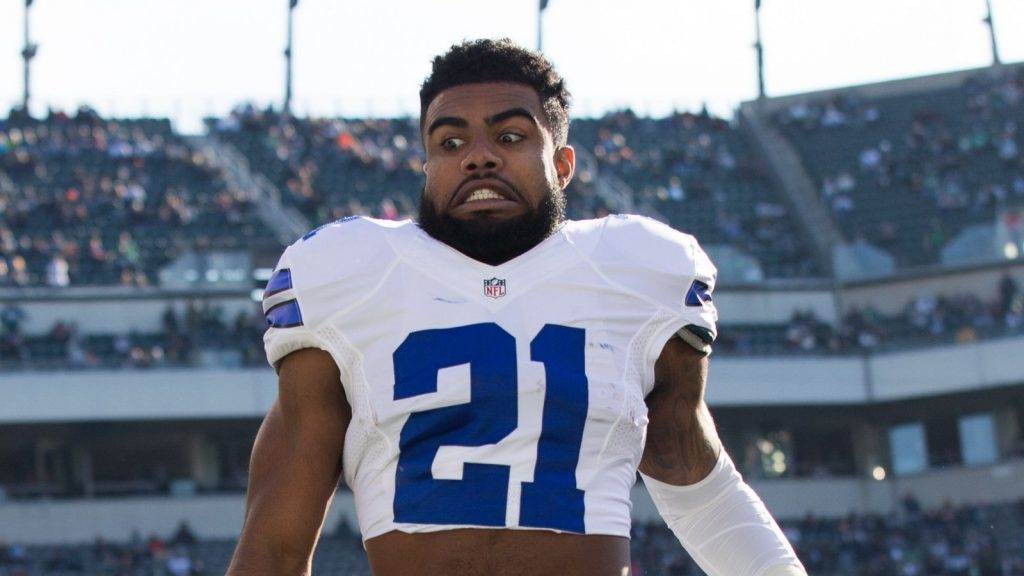 In order for Ezekiel Elliott's suspension to become a blessing in disguise, the Dallas Cowboys have to keep themselves in playoff contention through these next six games. I truly believe that's doable because of the six teams they will face during Elliott's absence. Let's take a look.

As you can see, this isn't the worst time for Ezekiel Elliott to serve his six-game suspension. The Dallas Cowboys could easily be 4-1 in the NFC East division and go 4-2 during this stretch in the schedule. That would keep their playoff hopes alive, which would be ideal with the start of the postseason right around the corner.

Luckily, that's not all…

During this time while the Dallas Cowboys are trying to keep their playoff hopes alive, Ezekiel Elliott isn't taking a pounding and will be fully rested upon his return December 17 against the Oakland Raiders. That means he will be at full strength for the final three games of the season and the freshest of any starting running back heading into the playoffs.

Having Ezekiel Elliott at full-strength or as near to it as possible would absolutely be a blessing in disguise for the Dallas Cowboys heading into the playoffs. This is especially true considering the unreal workload the Cowboys were giving him.

After seven games, Elliott has racked up 690 rushing yards on 164 carries, 19 receptions for 210 yards and eight total touchdowns. He was on pace for 418 touches, which seems like an astronomical number.

As unreal as that number may seem, it's not entirely out of the realm of possibility those numbers could've been inflated even more. In 2014 for instance, the Dallas Cowboys gave DeMarco Murray 449 touches. They made the playoffs that season, but Murray was noticeably worn down.

So, as much as we hate to lose Ezekiel Elliott these next six games, it could actually benefit the Dallas Cowboys in the long run. Of course, this all depends on whether or not they can keep themselves in the playoff race during Elliott's absence. I for one am not counting them out just yet.

Is Zeke's suspension a blessing in disguise?

Not to get too caught up in semantics, but “blessing in disguise” is a little too positive for this situation. I think you did a nice job of showing some of the silver linings in the situation; mitigating factors that reduce the sting. But overall, it still stings. We’d be better off with Zeke than without him, especially since most of your potential benefits are predicated on us making the playoffs. That will be much harder without Elliott.

Obviously we would prefer to have Elliott on the field, but it’s highly doubtful that happens. I think the Cowboys have a really good chance to still make the playoffs without Elliott though. The NFC is really wide-open. I was just trying to look on the brighter side of things.

Alfredo, the Cowboys OL is definitely the strength of their team and will keep them in contention no matter who is the starting RB. Thanks for commenting.

Great article. I believe that this team is prepared to do this without Zeke for awhile. When asked about the running game without Zeke, Ron Smith stated to the reporter, “We’re gonna take care of that. Zeke’s #1 seat will be nice and warm when he gets back.“ – (note: paraphrasing to ghe best of my recollection.)

Luckily, we at least have Zeke for the Kansas City game. But, when he does have to serve his suspension I think the Cowboys backups can be good enough to keep the team afloat until he returns.

Excellent article Brian. I realize there is going to be a difference with Zeke out, but I think most people may be underestimating how much Morris, McFadden and Smith may be able to accomplish behind our offensive line, which seems to be improving as the season progresses. I also think we are slightly underestimating what Dak can do in Zeke’s absence. That may turn out to be another silver lining, as Dak truly reaches new heights to his developing career. This is as long as our Defense can hold up, or God forbid, maybe even improve with time?!?!

Thanks for the compliment. I was just trying to look for little silver lining. But you’re right, a lot of people are underestimating the other RBs can do in his absence. They don’t have to be great, just good enough to keep opposing defenses honest. I would also expect Prescott to step his game.

brian good talking to you now y are they still taking the suspension off you know they must have something you know now three judges on going to hear the case so depending where there from newyork texas etc. he might win the case

To tell you the truth, I really have no idea what’s going on or what the outcome of all this will end up being. Elliott is going to continue to try to clear his name, so I would imagine he will continue to fight as long as needed.