Tight end is the rare position where there seems to be unanimous consensus over who is number one at the position; that is New England Patriots tight end, Rob Gronkowski. Past that, there is a log jam of guys who could lay claim to the NFL's number two tight end.

Jordan Reed, Travis Kelce, Greg Olsen, and Tyler Eifert all have a legitimate argument for being the second tight end taken in fantasy football drafts in 2017.

The question we'll try to answer here is, who is that second guy?

In my opinion, tight end has several factors attached to it that makes it one of the more shallow positions in fantasy football. Outside of the top five you might as well throw darts.

First lets take a look at the numbers: 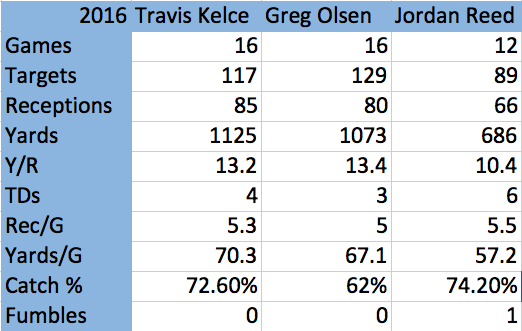 Jordan Reed's 12 games create a pace of 88 receptions on 119 targets for 915 yards and eight touchdowns. You obviously like the receptions and the touchdowns if you are in a PPR scoring league. The yardage total leaves a bit to be desired here, but opportunity is about to present itself.

With Pierre Garcon and DeSean Jackson moving on to greener pastures, the team is left with Terrelle Pryor, Jamison Crowder, and Josh Doctson as the top three wide outs on the team. To me this will lead to more opportunities for Reed.

Reed has two downsides, in my opinion.

To me this makes Reed a bit of a risky proposition, despite his elite talent.

Until the 2016 campaign, Travis Kelce had never posted a season with more than 1,000 yards receiving. Not even in 2015, when he started and played a full 16-game season.

There are TE1 numbers to be had from him, and his offense allows for opportunity with Jeremy Maclin and Tyreek Hill as the only receiving threats.

Alex Smith targeted Kelce more than any other target in the Chiefs' passing offense. Yes, Maclin didn't play a full season and Hill came on toward the end, but Kelce was being targeted seven times again. Compare that to six for Maclin and five for Hill.

It leaves you wondering is if this is a one year breakout for Kelce. His previous yardage high was 875. Also, he's never had more than five touchdowns in a season. 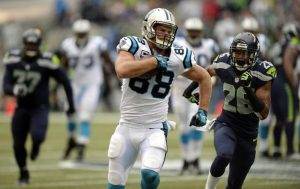 The Carolina Panthers have had some of the more inconsistent wide receivers in recent history, save for Greg Olsen. Olsen is by far the number one target in the Panthers' passing game, and by far the most consistent.

He doesn't score a ton of touchdowns, but that — to me — is based on how the Panthers operate in the red zone. They want to run the ball with their backs and quarterback Cam Newton, which limits touchdown opportunities for all of their targets.

Without another top receiving threat on the team, and based on his consistency, Greg Olsen is my number two tight end behind Rob Gronkowski.

Who's your number two tight end? Let me know in the comment section.

John Williamshttps://anchor.fm/inside-the-cowboys
Dallas Cowboys optimist bringing factual, reasonable takes to Cowboys Nation and the NFL Community. I wasn't always a Cowboys fan, but I got here as quick as I could. Make sure you check out the Inside The Cowboys Podcast featuring John Williams and other analysts following America's Team.

The Dallas Cowboys will take on another AFC opponent when they face the Jacksonville Jaguars in Week 15. The last time the Cowboys faced the...
Read more
Game Notes

Week 14 will see the Dallas Cowboys take on the in-state foe Houston Texans in Arlington for the battle for the Governor’s Cup. The Cowboys...
Read more