Football Schemes and Concepts Chapter 3: The 4-3 Under

At this point, we've covered the concepts of defensive gaps and techniques, and then we applied those concepts to the fundamental 4-3 defensive base formation: the 4-3 over. If you haven't read the first two chapters, I would advise you do so, given that we'll be using and comparing information from them in this post. Chapter One | Two.

The 4-3 under formation has several similarities to its over counterpart, but also some stark differences that allow it to be more useful in certain situations. Let's start with what remains the same between the two.

Both packages have the same personnel. That is, both packages have two defensive tackles, two defensive ends, three stand-up linebackers, two cornerbacks, and two safeties. In both formations, the members of the secondary will line up in the same spot for a particular coverage. For example, in a cover-2, the corners will line up on the receivers and the safeties will each cover one half of the deep part of the defensive backfield.

The last similarity between the two formations comes with the weak side defensive end (weak vs. strong sides were covered in chapter two). With both the 4-3 over and under, the weak side end will line up in the 5-technique, just off the outside shoulder of the weak side offensive tackle.

Where the formations differ is when it comes to the linebackers, and remaining three defensive linemen.

We can throw all of that out when it comes to the 4-3 under alignments for our front seven (excluding the weak side end).

This gives us the following defensive linemen alignments:

You may be asking yourself, what about the tight end? This is where we get the major difference between the over and under formations. 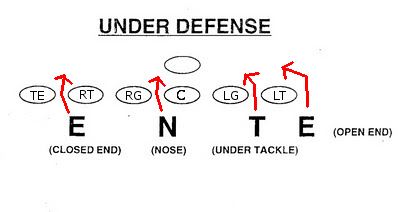 Given that there are seven gaps total, let's examine the gap responsibilities of the remaining members of the front seven.

We know that the WILL linebacker always follows the 3-technique. This means that whichever side of the formation the 3-technique is on, the WILL will be about five yards behind him. Looking at the image above, we can then see that the WILL is responsible for the weak side A gap.

We also know that the MIKE plays the middle assignment, between the WILL and SAM. Thus, our MIKE will line up just inside the strong side end, about five yards off the line of scrimmage. So which gap is he responsible for? Exactly; the strong side B gap.

Last, but not least, we have the alignment of the SAM linebacker. This is where things get shaken up the most.

Up to this point, we're used to the linebackers playing about five yards off the line of scrimmage. That's not the case with the SAM linebacker in the 4-3 under. Because of the shifted formation, we're actually going to line the SAM up in a two-point (no hand on the ground) stance, in the 7-technique alignment, just off the shoulder of the tight end. This results in the SAM retaining the strong side D gap assignment: 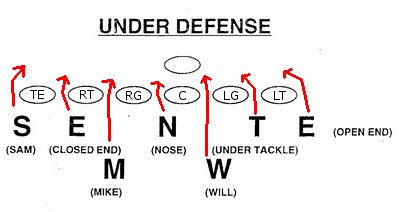 So you may be thinking, why put the SAM down on the line? He can just cover the D gap from five yards off the line, similar to his B gap responsibilities in the 4-3 over. Let's dive into that.

Let's take the most obvious perspective first: the 4-3 under allows you to have another player on the line of scrimmage, which raises your odds of a negative or neutral gain on a run play.

If the SAM has less distance to travel, he will be able to get to the point of attack (where the ball carrier crosses the line of scrimmage) in less time. This is helpful when your SAM (like most SAMs) is a slower or sluggish mover, and won't get to his gap in time.

A similar reason for moving the SAM to the line of scrimmage is down and distance. If the offense only needs a yard (or less) to gain a first down, you want to move more players closer to the point of attack to minimize the distance they need to travel to make contact and prevent the conversion.

When they say football is a game of inches, they aren't kidding.

Finally, sometimes you may have a SAM who isn't necessarily the most athletic player moving in a direction, but is big, strong, and is able to hold up against a big, 6'3″+ tight end looking to mow him over. In this case, you like your odds of sticking the SAM on him for a run play.

You have to be careful here, though, because if you're playing man coverage and the offense runs a passing play, your less athletic SAM will potentially be tasked with covering a tight end, which may be a losing battle.

It's all about match-ups.

So which do I choose?

Over the course of a normal week in the fall, the team's coaches will review tape on the upcoming opponent. They scout strengths and weaknesses, plays the offense and defense will run, personnel changes, etc.

Another thing they'll look for, is what type of play a team likes to run from a particular personnel grouping. They'll look at what type of tight end the opposing team has, and whether they like the match-up with their SAM.

The formations used all depend on the offense's tendencies, the down and distance, SAM vs. TE matchup, and the type of SAM you've got. The coaches will figure all this into the game plan for a given week, and make the formation determination throughout the course of the game.

In next week's post, we're going to dive into the “Nickel” formation, some of the similarities and differences it has to the base 4-3, and situations in which you'll run it. This is perhaps the most commonly used pass coverage that teams employ today, so next week's post is very important towards understanding defensive schemes.

Feel free to drop a comment below, or reach out to me on twitter @TheLandryTrophy. As usual, I've gotten a ton of insight from @JoeyIckes, who I strongly encourage you follow!

The Landry Trophy
Dallas Cowboys fan since the Drew Bledsoe "era." I love Tony AND Dak. I like to think that I'm the most objective that a fan can get, while still being a diehard, which I truly believe is the 8th wonder of the world. Go Cowboys!!
Previous articleCowboys en Español: David Irving en Problemas, Cambios en la Ofensiva
Next article4 Cowboys Who Must Remain Healthy in 2017

Add another W to the win column, as the Dallas Cowboys celebrate a 25-10 win over the Washington Commanders. The Cowboys now sit at...
Read more
Cowboys News

Out of all the 32 NFL teams, it's always an honor to be crowned the best defense. Now even though the season just started...
Read more
Game Notes

After starting the season in the worst way possible, to then losing Dak Prescott for what many thought at the time was going to...
Read more