The Dallas Cowboys had four players named to the 2018 Pro Bowl today. One of them is being honored for the first time in his career, and rightly so.

Defensive end DeMarcus Lawrence, who is wrapping up a breakout season, was named a starter in his first-ever Pro Bowl. Lawrence earned this distinction with his 13.5 sacks so far in 2017, which is currently third-best in the NFL. What's more, the 25-year-old has been as good against the run as he has at attacking quarterbacks.

Lawrence is the first Cowboys defensive player to be named to the original Pro Bowl roster since 2013. No surprise, that was DeMarcus Ware. Dallas has had Sean Lee and Jason Hatcher play in the Pro Bowl since then, but they were both replacement alternates.

Joining DeMarcus Lawrence will be the typical trio of offensive linemen Tyron Smith, Zack Martin, and Travis Frederick. This will be the fifth Pro Bowl for Smith and fourth for Martin and Frederick. Somewhat surprising is that only Tyron and Zack and will be starting; Atlanta's Alex Mack was named the starting center over Travis.

We'll see if any other Cowboys get added as players drop out due to injuries or simply declining to play. If the number stays at four, though, it will be the fewest players Dallas sends to the Pro Bowl since they had just three in 2013 (Ware, Jason Witten, Anthony Spencer).

It's worth noting that even though he didn't make the Pro Bowl, running back Ezekiel Elliott led the league with 97.9 rushing yards per game. That average was a little over 10-13 yards better than Pro Bowlers Le'Veon Bell, Todd Gurley, and Kareem Hunt. So, we can add the Pro Bowl to the list of the many things Roger Goodell stole from Elliott this year.

Let's not end on a down note, though. Congratulations to Travis Frederick, Zack Martin, and Tyron Smithm and especially first-timer DeMarcus Lawrence, on making the Pro Bowl!

Love the second to last paragraph…so true. Goodell is such a scumbag!! 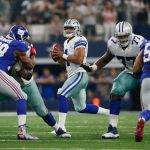 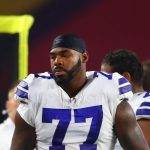