The Dallas Cowboys have one of the best, if not the best, running backs in the entire NFL in Ezekiel Elliott. But, the cupboard behind him is pretty bare and likely needs to be addressed at some point with either a free agent or a rookie.

Adding depth to the running back position isn’t necessarily a top priority because Ezekiel Elliott will rarely come off the field, but you have to have a good contingency plan in place for emergency situations. 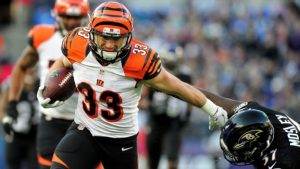 I personally believe the Cowboys will go bargain shopping this off-season and find a capable free agent RB to back up Elliott for the 2017 season. A player that makes sense to me is former Cincinnati Bengal, Rex Burkhead.

Yes, that white running back that used to play at the University of Nebraska.

That seems to be all that anybody knows about Burkhead or at least the only thing I ever hear when his name pops up. It may sound racist, but it’s true.

Now, before you cast this idea to the side, you have to give me a chance to explain why this makes a lot of sense for the Cowboys.

Burkhead isn’t the biggest or fastest running back in the league, but his value lies in all of the different ways he can contribute to the team.

Burkhead isn’t what you would consider an every down type of RB, but he is more than capable of toting rock given the opportunity. 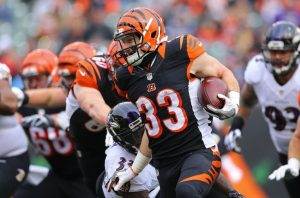 In fact, the only time Burkhead really got to show his stuff was towards the end of the year in 2016 against the Baltimore Ravens. He took full advantage of his opportunity and ran for 119 yards and two touchdowns on just 27 carries. That was against one of the best run defending defenses in the entire league.

He is a decisive runner and doesn’t shy away from contact. He also has good vision and is more elusive than a lot of people give him credit for.

With the Cowboys he would likely be the change of pace back and take over Lance Dunbar’s role on offense. But, unlike Dunbar, Burkhead is much more suited to run the ball between the tackles.

Rex Burkhead would also likely be an upgrade over Alfred Morris. He is better in pass protection and is also a better receiver out of the backfield as well. It’s debatable whether or not he’s a better runner because there’s such a small sample size so far in his career. But, it wouldn’t completely surprise me if he comes in and makes Morris expendable.

Of course, that’s not the only way Burkhead can contribute. He was mostly a special teams player with the Bengals and would likely continue to contribute in that capacity with the Cowboys as well.

Rex Burkhead is the definition of “value” when it comes to what the Dallas Cowboys want in a backup running back.

You add him, Ezekiel Elliott, and a rookie RB at some point in the draft, and you have a pretty good versatile group of players that have restocked the cupboard in a short amount of time.

If the Cowboys stick to their bargain shopping approach to free agency, adding Rex Burkhead just makes too much sense not to happen.

Do you think Rex Burkhead would make a good backup for Ezekiel Elliott?