The first half of Monday night's game looked eerily similar to week two in Denver.

On offense, the Dallas Cowboys looked lost. Their offensive line had failed to get any real movement up front, and they had allowed multiple pressures and hits on their quarterback. The run game wasn't there, and neither was the passing attack.

On defense, Dallas was getting straight-up dominated. The same Arizona Cardinals offense which had struggled to move the ball against the lowly Colts a week ago was taking it right at the Cowboys.

And then, with one play, the entire game changed.

Quarterback Dak Prescott put the offense, and the team, on his back Monday night, inspiring his Cowboys to a huge road win. While the numbers weren't pretty, Prescott made all of the right plays at the biggest moments, and lead this team to victory.

The biggest play of game, however, and the one which turned the tide for good, was Prescott's first touchdown run. On a read option play Prescott perfectly read his keys and pulled the ball from Ezekiel Elliott. Once in the open field, Prescott refused to let the Cardinals deny him, diving head first for the score.

This touchdown was followed by another great effort from Dez Bryant, who carried defenders on his back for another score.

This win was far from pretty, and it was far from going according to plan. Elliott was under 100 yards rushing, Bryant didn't have much impact in the passing game, and the defense did give up some big passing plays.

But in the end, none of that really matters. Thanks to contributions from guys like DeMarcus Lawrence, Jourdan Lewis, and of course, the leader, Dak Prescott, the Dallas Cowboys came away with an important road win.

Now, Dallas sits atop the NFC East at 2-1 with the Washington Redskins and Philadelphia Eagles, controlling their divisional destiny.

Dak had only 1 pass for over 30 yards all game. His 3rd down conversion rate was abysmal. He seems completely incapable or unwilling to throw deep. This is very concerning. 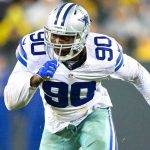 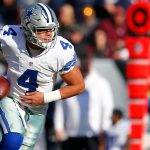