With three losses, a 7-1 Philadelphia Eagles team and a probable suspension for Ezekiel Elliott, every game is a must-win for the Dallas Cowboys. It's a very different season than 2016, but the Cowboys are still competing for a playoff spot.

The Ezekiel Elliott story has been one hell of a roller coaster. It almost feels like his playing status changes every 24 hours. But the important thing here, is that #21 will take the field this Sunday versus the Kansas City Chiefs, who have one of the worst rush defenses in the NFL.

However, their offense is one of the best in the league. Going up against the team that once called itself the Dallas Texans, you can count there will be a big show in Dallas.

Here is this week's Cowboys Wishlist!

Wish #1: Taco Sunday: The Rookie Gets His First Career Sack

It's been a long season for the first-round pick. We didn't have big expectations for the product out of Michigan, but his play has been a bit disappointing through seven games. The bashing on the guy from fans, writers and analysts has been relentless.

But he's still a Cowboy. And we should all be rooting for him.

This Kansas City team is allowing three sacks per game. I'm convinced that DeMarcus Lawrence and David Irving will take advantage of this, but I wonder if Taco Charlton finally gets his sack.

He had a couple in preseason, but this would be his first career sack. I hope this wish comes true. After almost intercepting Kirk Cousins in Washington, getting to a quarterback would be a huge confidence boost, and that's exactly what Taco needs. 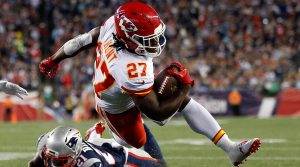 This Cowboys defense is far from ideal. We know that. And if we were talking about holding Hunt under 60 yards before the bye week, I would've said “No way that's happening.”

But the Cowboys now have a better LB corp. With Sean Lee and Anthony Hitchens on the field at the same time, this is a very improved defense, even though it's still not one of the best. Jaylon Smith's playing time has been reduced a lot and that has done nothing but help the “rookie” and this defense.

Kareem Hunt has been held under 60 rushing yards only twice in his career. One came last week when he faced the Denver Broncos, and the other when the Chiefs played the Steelers and Hunt only carried the ball nine times.

If the Cowboys defense wins the battle versus the Chief's rushing attack, which features the #1 candidate for Offensive Rookie of the Year, this defense will win a lot of confidence back. It's not a walk in the park, but I wish they can pull it off.

The Chiefs have an offense with more than a couple of threats. Besides Hunt and Tyreek Hill, the Chief's have one of the best – if not the best – tight ends in the entire league right now. Travis Kelce will prove to be a big-time test for this Cowboys' defense and specifically, Byron Jones.

Jones has proven himself to be very good against tight ends throughout his young career. It's more than likely that we see 31 play all day versus the Kansas City's TE.

Kelce is a beast, though.

He's had three 100+ yards games and is averaging more than 12 yards per catch. I wish Byron is able to pass one of the biggest tests he's faced in his time playing in the NFL. 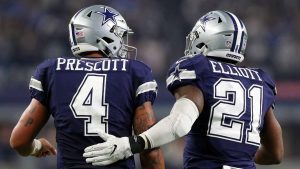 Predicting the weather is officially a simpler task than predicting Ezekiel Elliott's playing status in the future. We were all certain that Zeke would miss today's game and on Friday that changed unexpectedly.

However, it's probable that Elliott will lose this after his last appeal is heard. So, supposing that this is the running back's last game before his suspension, I expect him to go out there angry and have a big day.

He's had five touchdowns in his last two games. It'd be fitting for him to continue that streak and to also run for more than 100 yards.

Even so, lost in the middle of the Ezekiel Elliott talk is Dak Prescott. There's no doubt in my mind than in Zeke's absence the young quarterback will be ready to step up and put the team on his shoulders. As a good sign for Cowboys Nation, I wish they score at least five touchdowns between the two.

Dallas has been able to effectively get after the QB consistently, but not only that. They're the team with the second least sacks allowed in the season. Even after losing two starters, the Cowboys' offensive line is still one of the best.

Through eight weeks, Dak Prescott has been sacked only once. In a game which more than likely will be a shootout, sacks can become the difference maker.

Both teams are expected to put on a lot of points on the board today. I wish this offensive line takes care of Dak, and gives this offense a chance to win this football game.

We’ll be doing this weekly here on Inside The Star, so if you have any wishes you’d like to see on this series, make sure to tweet them at me and I'll include your tweets!

Perhaps one of the most surprising stats this season is that Alex Smith has yet to throw an interception this season. I love this wish. Make it happen! I'm calling Jourdan Lewis to make the play.

Mauricio Rodriguezhttps://www.facebook.com/PrimeroCowboys/
I love to write, I love football and I love the Dallas Cowboys. I've been rooting for America's team all the way from Mexico ever since I can remember. If you want to talk football, I'm in... You'll find me at @MauNFL.
Previous articleWeek 9 Cowboys vs Chiefs Staff Picks and Notes
Next articleDAL 28 KC 17: Cowboys Mentally Tough In Huge Home Win

The NFL season may have recently ended, but the road to Super Bowl LVII begins once again over the coming months. Teams will be...
Read more
Game Notes

For the second time in three weeks, the Dallas Cowboys offense let them down, this time in a road loss to the Kansas City...
Read more