The Good, The Bad, And The Ugly For Cowboys Against Rams

It's always difficult to write about the Dallas Cowboys after a disappointing loss. After watching the Cowboys fall to the Los Angeles Rams 35-30, it might be time to admit that all of Cowboys Nation might have set the bar too high for this year's team. Maybe they just aren't as good as we all thought or hoped they would be coming off of a playoff season.

Fortunately, there are a lot of games to play and hopefully the Dallas Cowboys can turn things around quickly. They have a tough matchup next week against the Green Bay Packers, but they have their bye the following week to gather themselves. Hopefully, things will only get better from here on out.

Having said all of that, let's jump into The Good, The Bad, And The Ugly for the Cowboys this week against the Los Angeles Rams. As always, please feel free to use the comment section at the end of the article to share any of your thoughts and opinions on this topic.

It's always difficult to look back and find some positives from a game the Dallas Cowboys probably should've won. When both teams went in at halftime, it looked as if the Cowboys were on their way to another victory because they were finally able to get Ezekiel Elliott involved on offense.

Ezekiel Elliott looked much like the player we saw last season. The same one that led the NFL in rushing and the same one that was in conversation to win NFL MVP. He was effective in both the running and passing game, finishing with 85 yards with one TD on the ground and 54 yards through the air and one TD.

Unfortunately, as effective as Elliott was in the first half, things didn't go quite as well the second half against the Rams. I don't think it was anything to do with Elliott. I think it had more to do with the offensive playcalling and the adjustments the Rams defense was able to make. But, at least the Ezekiel Elliott we all grew so fond of last season has finally made an appearance. It might've been the only good to come from the game.

Deciding what the bad was for the Dallas Cowboys against the Los Angeles Rams was easy one for me. The Jared Goff led Rams offense was able to move the ball at will up and down the field pretty much the entire game. Luckily though, they had to settle for seven field goals and just two touchdowns. It could've been a lot worse.

I knew that the defense would go through some growing pains due to all of the youth playing for the Cowboys, but none of the veterans are really stepping up either. Sean Lee has been one of the only consistent veteran players, and his absent was absolutely one of the reasons the overall performance of the defense was so bad.

Todd Gurley was able to rack up over 200 total yards of offense, 121 rushing and 94 receiving. I don't think he would've had as good of a game as he did with Sean Lee playing. But, even Jared Goff was able to carve up the defense. He completed 21 of 36 passes for 255 yards and two TDs. Unfortunately, the entire defense is to blame and it might be time to admit they are a lot worse than we wanted to believe. 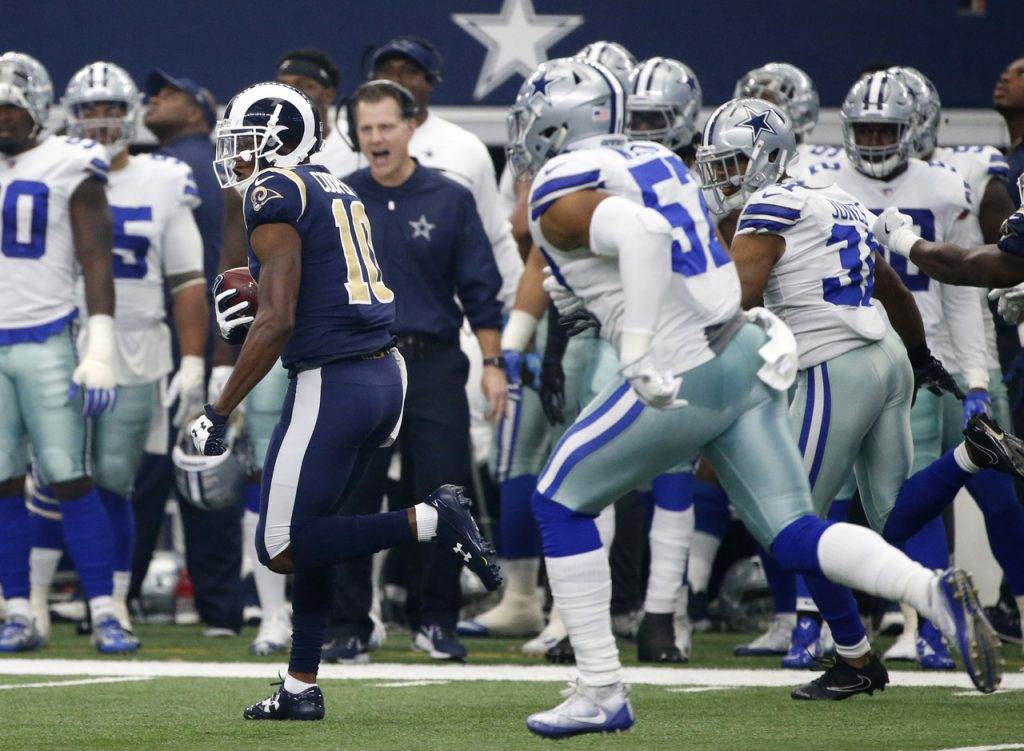 I started to go a different direction here, but ultimately I decided the ugly this week for the Dallas Cowboys against the Rams was the performance of the special teams. I honestly believe that it was a special teams for the Cowboys that allowed the Rams to get back into this game and ultimately come away with the victory.

I think two plays in particular ended up resulting in 10 points for the Rams offense. The worst of the two was when rookie return specialist Ryan Switzer muffed the punt, allowing the Rams to recover. This led to the first touchdown for the Rams. The other special-teams letdown was when Pharaoh Cooper returned a kickoff into Cowboy's territory. The defense was able to hold them to a field goal, but it was still points on the board.

If not for those two bad plays on special teams, the Dallas Cowboys would've likely come away with a victory. They only lost by five points to the Rams, but that 10 point swing because of poor special-teams play was more than they could overcome in the end. This will absolutely have to be cleaned up as soon as possible.

What is your good, bad, and ugly for the Cowboys against the Rams?

Something else that could have made a difference when Tank strip-sacked Goff, that would have given the offense a short field….I guess you can call that an ugly because no one was their for Dallas to recover

That definitely could have been a game changer for the Cowboys. Also, if Anthony Brown would’ve been able to come up with the interception later in the game.

Switzer had been making suprisingly good decisions fielding the ball for a rookie, until yesterday. He brought 2 out from deep in the end zone which made no sense also, and cost Dallas about 11 yards total.

The play he was in for the spread / empty, then went to RB – was Linehan outthinking himself IMO. Switzer has done nothing yet as an offensive player, and appeared to influence nobody on the play.

We knew on paper this defense was gutt-able to start the year – no dominant DL’er and lots of new parts in the secondary. It’s been better than expected until yesterday.

Biggest problem in 2017 IMO – Dak is getting hit. He had almost no pass plays with good protection yesterday, and that will force you into the diminished play we’re seeing from him. No concern about him as a player going forward, although it is up to Garrett and Linehan to guide him through his first real downturn as a pro QB.

But it’s not the best OL in football right now. That is the problem on offense IMO. Super run by Morris yesterday, more speed than I thought he had.

Woods: every time he gets on the field he seems to make an impact. We’re moving quickly to the situation I mentioned in pre-season / if he starts it has to be at FS. That will likely move Jones to corner not SS, might as well try it at this point. Brown is my other starter there. That still leaves you Scandrick at slot CB, where he’s best used. If Awuzie could ever stay on the field, that would help the long downs.

I really think they need to simplify things for Prescott. Move the pocket and make it easier for him to get through his reads quicker. That way he only has about half the field to read and can use his mobility to his advantage. I think he’s in the most inaccurate when he’s asked if there out of the pocket.

I completely agree with you about Xavier Woods. I would start him at safety, but still paired with Byron Jones. Woods can be the deep safety and Jones can be used to man up against TEs. I’m not sure about Anthony Brown. He has struggled these past couple of games. Awuzie really needs to get healthy and stay that way. Like Woods, he could be utilized at CB or S.

To me Dak’s inaccuracy is coming from too much pressure, and then trying to do to much because his offense is struggling. Will agree there is a lot that can be done with his sprint out & bootleg game that may help right now. Same reason I want more pitches for Elliott. Let them beat the defensive front with their individual skills while their OL gets better.

Which brings up: Cooper was no upgrade from Green. I think the Cowboys have to deal for a proven OG if they want to contend in 2017.

There are quite a few things that the coaching staff can do to help Prescott. Whether that happens or not is something we will have to wait and see.

I was never a fan of Cooper to begin with. There is a reason he has bounced around the league. Unfortunately, I don’t see the Cowboys trading for anybody this year.