The Denver Broncos, Buffalo Bills, Jacksonville Jaguars, San Diego Chargers, Los Angeles Rams, and San Francisco 49ers are all teams that will start the 2017 season with new head coaches. The vultures were circling around several of these organizations, which is why head coaching changes were made in the first place. The Dallas Cowboys could end up being the beneficiaries when/if these teams start making changes to their rosters. 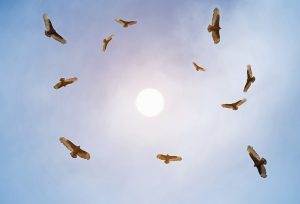 It’s only natural for new head coaches and their coaching staffs to come in and evaluate the roster from top to bottom and then make changes as they see fit. Teams around the NFL will be watching closely and the Cowboys should absolutely be one of those vultures circling to pick up any “meat” that they believe will help their team.

Of course, some of these teams will have more roster turnover than the others. The Denver Broncos for example already have one of the most complete rosters in the entire NFL, so I wouldn’t expect much change there. But, the San Francisco 49ers and the Los Angeles Rams could be two teams that the Dallas Cowboys are watching very closely to pick up any unwanted scraps.

I’m going to dive in a little deeper and attempt to show you what I mean for the new head coaches of the 49ers and Rams.

Kyle Shanahan, former offensive coordinator of the Atlanta Falcons, was hired by the San Francisco 49ers to take over the head coaching job. To say that he faces an uphill battle would be an understatement.

Now, the 49ers are not the most talented of teams, evidenced by their back to back losing seasons, but there are some players the Cowboys could be interested in. 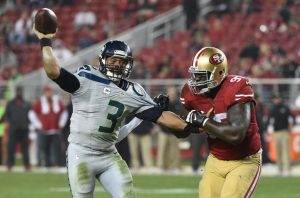 Kyle Shanahan recently hired Robert Saleh as the 49ers new defensive coordinator, but it hasn’t been announced yet if they will operate a 3-4 or a 4-3 scheme. The past several years they have been a 3-4 team and a player that hasn’t fit into that scheme that could be of interest to the Cowboys is defensive end Tank Carradine.

Carradine is a prototypical 4-3 DE, but during his time with the 49ers he has been tried as an outside linebacker and also been asked to add weight and play a 3-4 DT. Unfortunately, both attempts to try to fit him into the 3-4 defensive scheme has been like trying to put a square peg in a round hole.

I believe Tank Carradine would be a great addition and help improve the pass rush for the Cowboys. But, acquiring him from the 49ers could be tricky if he’s not released. I would personally trade a late round draft pick to obtain his services, but this is a situation that falls into the of wait and see category.

Sean McVay may be the youngest head coach in the modern era of the NFL, but he will have plenty of experience surrounding him. The hiring of defensive coordinator Wade Phillips will probably help McVay through any kind of coaching jitters, but it’s Phillips’ announcement of switching to the 3-4 defensive scheme that could benefit the Dallas Cowboys. 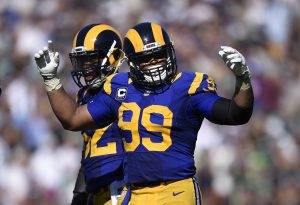 The Los Angeles Rams have invested heavily over the past several years to put together a pretty impressive 4-3 defensive unit. Phillips’ change to a 3-4 could mean some of those investments won’t quite fit in his new defense, especially former first-round defensive tackle Aaron Donald.

Aaron Donald has completely dominated as a 3-technique defensive tackle since entering the NFL. At 6’1″, 285, Donald doesn’t exactly fit the size criteria to transition to a 3-4 defensive tackle.

It is going to be really interesting to see how/if Wade Phillips is able to fit Aaron Donald into a 3-4 defensive scheme. If things don’t go well, the Cowboys could be the beneficiary.

The Dallas Cowboys were all set to draft Aaron Donald back in 2013, but the Rams pounced on him first. They had to settle for Zack Martin instead, but things still turned out nicely. Just imagine if they could have both players.

For this to happen though, the Rams would have to be willing to trade Aaron Donald and the Cowboys would likely have to give up at least their first-round draft pick. Although it’s unlikely, it is still a possibility.

Now, there is no telling when/if either of these players will be available at some point this off-season. That’s not really the point I’m trying to make.

The Dallas Cowboys need to search every nook and cranny in order to improve their roster. New head coaches in the NFL create an opportunity that otherwise might not be available to acquire players who don’t fit into their philosophy.

Of course, if Tank Carradine or Aaron Donald become available or are being shopped, I think the Dallas Cowboys should absolutely entertain the idea of bringing them aboard.