The Dallas Cowboys have one of the biggest fan bases of any sports organization in the entire world. Unfortunately, that means some of us fans are actually living in enemy territory. This is true for me because I live in the Houston Texans market and have heard for over a decade how much they dislike Tony Romo. That is why I don’t believe Texans fans deserve to have Romo as their starting quarterback.

Living in the great state of Texas you are either a fan of the Houston Texans or Dallas Cowboys. I happen to be a fan of America’s Team, but have plenty of friends and family who root for the Texans. Actually, I’m a bit of a rarity and root for both teams, but my loyalty will always lie with my boys in blue.

Putting down Tony Romo is one of the favorite things that Texans fans like to do. Unfortunately, the majority of these people truly don’t understand how good of a QB he is or the things he has accomplished during his tenure in the NFL. They are simply misinformed or uneducated. It’s understandable, but it’s time to set the facts straight.

Tony Romo: The Proof is in the Pudding

I’ve heard from Texans fans for over a decade now that Tony Romo isn’t a good quarterback and that he chokes when the game is on the line. Things couldn’t be further from the truth. Romo is not only one of the better quarterbacks in the NFL right now, but one of the best to ever play the game, and I can prove it.

*  All statistics provided by Pro-Football-Reference.com

But, this is where I like to prove Texans fans wrong. The preconceived notion that he can’t win when the game is on the line is absolute nonsense, evidenced by his fourth-quarter comebacks. This number would even be higher if not for his recent injury problems. The same can be said about his game-winning drives.

Of course, this won’t convince a lot of Houston Texans fans, because they already have their minds made up about who Tony Romo is as a player. That’s okay, some people just don’t like to admit when they’re wrong. But, that’s why I don’t believe the Texans fans deserve Romo as their quarterback. 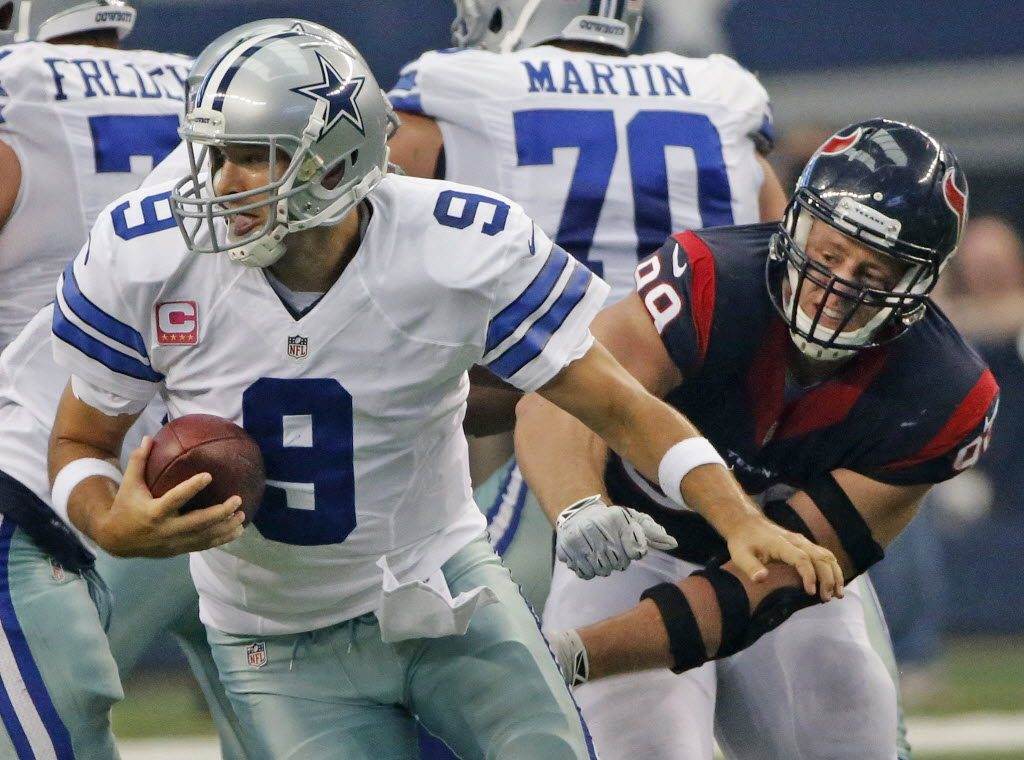 The other top argument that Houston Texans fans like to use against Tony Romo is that he is injury prone. This unfortunately is a valid argument, but when I bring up the topic of J.J. Watt having a similar injury history, if not worse, they simply don’t agree.

You see, it’s all about perception and to Texans fans, Watt is a football “God”. As such, he simply cannot be compared to Tony Romo, but they would be wrong once again.

There is no denying Tony Romo has a long list of injuries over his 10+ seasons in the NFL as the Dallas Cowboys starting quarterback. But, none of those are on the serious side of the spectrum, except for maybe his back injuries.

Out of all of Romo’s injuries, he has only had to have surgery once in his career, the same can’t be said for J.J. Watt.

Like Romo, J.J. Watt also suffered a herniated disc that would ultimately require surgery in 2015. Watt went through the entire rehab process heading into the 2016, but unfortunately  once again reinjured his back, requiring surgery for second time. If you’re counting, that’s two back surgeries in consecutive seasons.

You can see for yourself that Houston Texans fans don’t really have much room to talk in regards to Tony Romo’s injury history. This is especially true if they can’t admit to themselves that J.J. Watt’s injuries were worse and required surgery.

After listening to Houston Texans fans continuously bash Tony Romo over the years, I don”t think they are deserving of his services. I do however think it is a really good fit for Romo to continue his playing career, especially since he would be joining my second favorite team in the NFL.

Maybe, just maybe, Romo can come to Houston and prove to all of his doubters just how good of a QB he actually is. I would personally like to see all of these Houston fans eat crow when a 36-year-old QB comes in and instantly becomes the best quarterback to play for the organization.

Unfortunately, we’re going to have to wait and see where he ultimately ends up once the Dallas Cowboys finally decide what to do with him.

Do you think Houston Texas fans deserve Tony Romo as their QB?