Hyde and Zeke: Should The Cowboys Trade For 49ers RB Carlos Hyde?

With the trade deadline slowly but surely counting down and the Cowboys best offensive weapon likely to be sidelined the next six games, the Cowboys must figure out what to do at the running back position without Ezekiel Elliott.

The three options they have internally are Alfred Morris, Darren McFadden, and Rod Smith. Alfred Morris is the obvious answer to our question since he has been the team's RB2 all  season. Darren McFadden also makes a lot of sense, seeing as just two years ago he rushed for over 1,089 yards and averaged 4.6 yards per carry. Rod Smith is the final option that is already on the Cowboys’ roster. Smith has only 12 career carries, but has shown a lot of promise.

While in-house options may be the route the Cowboys decide to turn to, there are plenty of options available via trade for the Cowboys to turn to. According the Ian Rapoport, the Cowboys have already started taking calls on running backs.

#Cowboys are taking calls on RBs. While they seem like they want to stand pat, I wonder if they’d make a call on old friend Demarco Murray 🤔

The best one who may be available in my opinion is San Fransisco 49ers back Carlos Hyde. Hyde is currently averaging 4.0 yards per carry and has 4 rushing touchdowns on the season. Remember, he’s doing this with no real threats at quarterback or on offense at all. Putting up these kind of numbers while being the lone weapon on the 49ers' offense is impressive. 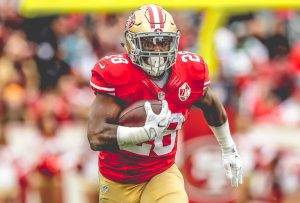 Hyde is only 27 years old, and resembles Ezekiel Elliott's style of play more than you think. Hyde is elusive, powerful, explosive, and even does the dirty work like pass blocking and catching the ball out of the backfield. His ability to make defenders miss and get the dirty yards is something the Cowboys will miss dearly while Elliott serves his suspension, Hyde could help patch that up.

Carlos Hyde has had a successful start to his early career, and will be a free agent after the 2017 season, so he will likely want to put some good tape out. What better way to do that than run behind this offensive line?

Now obviously, it would cost the Cowboys something to land Carlos Hyde, but I don't think it would be much. Jay Ajayi was traded to the Eagles from the Dolphins early this morning for a fourth round pick. Ajayi is only 24 years old, has two years left on his contract, and is coming off a 1,924 yard season. In my opinion, Hyde would cost somewhere between a fourth to sixth round pick.

Considering his injury history, contract situation, and that San Francisco is in complete rebuild mode I see them letting him go for a fifth round pick. Remember, the Cowboys' will have multiple fifth round picks due to the amount of compensatory picks Dallas will be given for the 2018 NFL Draft.

This one is a no-brainer. Carlos Hyde is an elite running back in my opinion, and San Francisco seems more than willing to give up talented players for draft picks. Why not bolster your running back position with a player who is a major upgrade over Darren McFadden, Alfred Morris, and Rod Smith?

Do you think the Cowboys should trade for San Francisco 49er's, Carlos Hyde?

Connor Livesayhttps://insidethestar.com/
Born in 1995, loved Football but more importantly the Dallas Cowboys since day one. Living in Redskins Country flying the Blue and Silver flag as high as possible. Covering the Dallas Cowboys for InsideTheStar.com and CowboysNation.com. Catch me on twitter @ConnorNFLDraft!
Previous articleEzekiel Elliott, NFL’s Future, and Realities for Modern Fans
Next articleCan Cowboys Passing Game Sustain Without Ezekiel Elliott?

I like his style of running, I think hecwpuld be ideal for us.