Darnell Leslie became the first Dallas Cowboys player to sign with the team from Monmouth University since Miles Austin on Tuesday, looking to follow a similar successful career path as he fights to earn his star at outside linebacker/defensive end.

I’m biased, but Miles Austin will always be one of my favorite Cowboys because of his transition from the MU Hawks to the Cowboys – and what it meant for this area, covering the Cowboys from the Jersey Shore.

I had a chance to interview Leslie on what it was like to sign with America’s Team on his birthday, his college experience, early career advice he’s received from Austin himself, and initial impressions on life in the NFL.

You can listen and read the full interview below:

Q: Take us through yesterday’s experience with your birthday and the signing with the Cowboys becoming official. You were with Tampa Bay early in the offseason, so you’ve already bounced around a bit and have gotten a feel for what its like to be with an NFL team. Yesterday must have been pretty exciting for you, how did you spend the day, where were you when you got the news, and how did you celebrate both achievements?

Darnell Leslie (@DarnellJamar_): I got the word that I would probably be coming back to the Cowboys on Sunday after mini camp ended. They told the tryout guys to pack their stuff and we headed to the airport. One of the personnel staff emailed me and said that there was a strong chance I would be coming back the next day to possibly sign with the team.

They had to work out the roster, but I had a good feeling I’d be coming back. As soon as I got home that Sunday night, I had a text on Monday morning letting me know that they wanted me out there the next morning – which happened to be my birthday. It was pretty exciting for me and definitely a dream come true to be on an NFL roster, but for it to happen on my birthday was pretty special and it was probably one of the best gifts anyone can ask for.

Q: What do you think you can take from your short time with the Tampa Bay Buccaneers before this to the Cowboys in adjusting to the game along with the other rookies and tryout players?

Darnell Leslie (@DarnellJamar_): I can take a lot from Tampa Bay alone. I was there for four days doing their rookie tryout and the biggest thing I got from them is that the speed of the game is a lot faster. Its a lot more up tempo. The plays are definitely more complex than they are in college, especially for me having never played linebacker until a few months ago. It was a big learning curve for me getting that crash course in Tampa, but the plays we learned there came from the Defensive Coordinator we have here with the Cowboys (Rod Marinelli) as well.

A lot of the things I was learning there were similar, and that allowed me to get my feet wet. When I got to Dallas I felt a lot more comfortable in a lot of my assignments.

Q: What has your experience with Defensive Coordinator Rod Marinelli been like preparing for this season?

Darnell Leslie (@DarnellJamar_): I’m not directly working with Coach Marinelli but I’ve seen the way he coaches the linemen on the other side of the field and there’s a lot of energy. Those guys talk highly about him and from the experiences I’ve had with him in team meetings I love his energy and he’s a good guy. He wants to get us better and elevate our games to the next level. 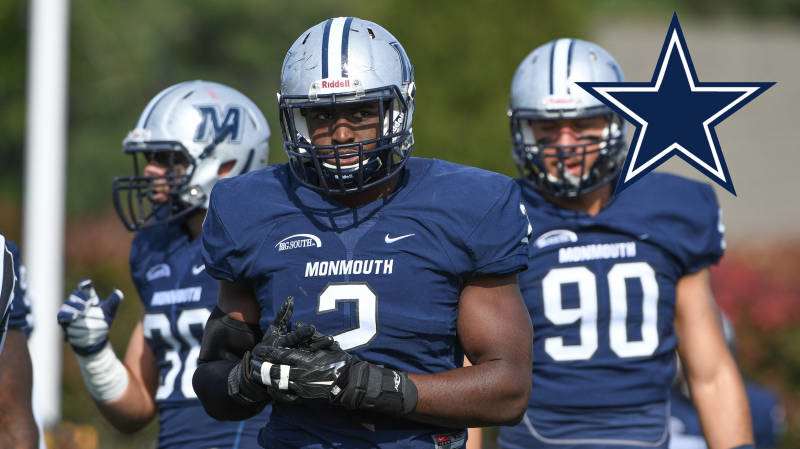 Q: How would you describe your game and the traits you can bring to this team on the edge?

Darnell Leslie (@DarnellJamar_): Rushing the edge on certain blitzes that we have for the outside linebacker is going to be the most natural thing for me to do because I played DE all throughout college. That along with my instincts and being an athlete will help me a lot at any position really. Its football and you have to react at any position. Those two things are really going to help me succeed in the NFL.

Q: The Cowboys pass rush has been an area fans have called for improvements with for a while now, even still as they used the 28th overall pick on Taco Charlton. Is this something you’ve gotten a sense of as you compete for a spot on a team that’s struggling to find consistent pass rushers?

Darnell Leslie (@DarnellJamar_): Taco is a great player as a first round pick. I haven’t seen him play much but with his attributes and college film he’s going to help the defense tremendously as a rookie. As for me, I’m not too sure about how big of an impact I can have on this team coming from a smaller school. I have a lot more to prove but once I get my feet wet and get more experience I’ll feel more comfortable and can help in any way possible.

Q: Every team wants to say they have a high level of competitveness in the way they practice and prepare. How has fitting in with the other rookies on the Cowboys been in this culture that is so built up on competition under Jason Garrett though, and who have you been able to reach out to?

Darnell Leslie (@DarnellJamar_): Its gone well, there are four rookie LBs that we have in our group and we’re all pretty cool. They’ve embraced me pretty well, and they’re all from different schools and levels. We have similar but different backgrounds in terms of competition that we’ve played but the rookie class in total is a great group of guys. We’re all very well mannered and well versed. As a unit we’ll be able to compete with any other rookie class honestly, we have a whole bunch of talent.

Q: What do you think it says about your situation in the NFL with one of the better teams in the league when you have fellow rookies like Chidobe Awuzie leaving rookie mini camp to graduate Colorado but commit to making it back the next day and the Cowboys projecting themselves as a brand everyone knows about even with your background on the East Coast?

Darnell Leslie (@DarnellJamar_): Its definitely a different feeling being here now. Chido had to go back for his graduation and that shows a ton of character, he wanted to finish out what he did in college and I respect that 100%.

I don’t think I’ve fully soaked in the moment, I’m stuck in it right now, because I haven’t come from a program close to this in my four years at Monmouth on the East Coast. It was a smaller school with not the highest or lowest level facilities but coming here to the brand new facility is a shell shock. Seeing the view, the weight rooms, and everything else is crazy.

In a few more days I’ll start to realize this is the NFL and the next level, I have to let it help me make me better.

Q: What excites you the most about moving forward with this team knowing the opportunity that is ahead for them as a full team, and when you get to the point where you’re on the field with a player like Jason Witten, where do you see yourself and the team going?

Darnell Leslie (@DarnellJamar_): I definitely see myself making the team on special teams. I’m pretty sure that being a rookie and a smaller school guy without the most explosive film will lend itself to making me a special teams guy and adding needed depth if a guy goes down. With Pro Bowlers like Dez Bryant, Sean Lee, and Jason Witten I definitely think this is a Super Bowl caliber team and we saw that last year with their record and performance. They’re only going to get better and the next step for us is definitely the Super Bowl.

Q: What was your favorite team growing up?

Darnell Leslie (@DarnellJamar_): I was born and raised in Gaithersburg, Maryland, so anybody can guess it was definitely the Redskins. It’s a hard one to bite but I’m a Cowboy now and this is my team.

Q: Is there a QB that you would want to sack the most in the NFL right now?

Darnell Leslie (@DarnellJamar_): Nah, I’m just trying to go out there and play and earn a spot to make the most of this moment.

Q: Getting back to your Monmouth career, Miles Austin was the headlining player for guys from your school in the NFL as the first to do so with the Cowboys. He became a fan favorite for Cowboys fans in the area. How much do you know about his story and not only his career as a starter but his beginnings and process as a UDFA in his own right?

Darnell Leslie (@DarnellJamar_): Miles coming from Monmouth is like the superhero for all of our football players and athletes that want to go to the next level. He’s always come back to the school and given back which we all appreciate. In this moment he’s embraced me as a younger brother and I’ve seen him a bunch in the facility. He’s been in my ear about doing as much as I can, about being noticed and learning the playbook to keep my foot in the door here and make the most of this.

I haven’t picked his brain yet about what he did to get and stay here so long but I’m definitely going to have that conversation with him in the near future.

Q: Did Miles have anything to say about the draft process that players like yourself have to go through, and what was that experience like for you looking back at it?

Darnell Leslie (@DarnellJamar_): I think you’re right in saying that coming from a smaller school takes twice as much work to get noticed. That’s all part of the game because we don’t play Alabama, LSU, or those bigger name schools. We have to prove ourselves more. This draft process went in my favor and I had my fair chances of getting exposure.

My agent did a hell of a job getting my name out there and getting me workouts with teams. At that point it was up to me to produce and convince these teams that I’m worth taking a shot on.

I think this whole process has been pretty fair for me.

Tell us what you think about “Interview: Cowboys LB Darnell Leslie Looking to Follow Miles Austin’s Lead in Dallas” in the comments below. You can also email me at Sean.Martin@InsideTheStar.com, or Tweet to me at @SeanMartinNFL!