On January 1st, 2016, then Notre Dame star linebacker Jaylon Smith played in what many thought would be his last ever football game – suffering a gruesome knee injury in a bowl game against Ezekiel Elliott's Ohio State Buckeyes. Now teammates with Elliott, Jaylon appeared in his first game with the Dallas Cowboys on September 10th of this year, never looking back to defy all odds and lead this team in tackles through 14 games.

For his resilience, courage, and uplifting play, Jaylon Smith was awarded the Ed Block Courage Award by his Cowboys' teammates yesterday.

Here's a cool story. The Cowboys have voted Jaylon Smith as their 2017 Ed Block Courage Award winner. Very well deserved, given that Smith rebounded from one of the most gruesome injuries in recent memory to lead the team in tackles, with 96 this season.

Smith will get the opportunity to represent the team that not only took a chance on him with the 34th overall pick in the 2016 Draft, but an organization that has fully supported him through his entire rehabilitation process at the Ed Block Courage Awards in February.

At times, the Cowboys' support of Jaylon Smith felt almost “fake”. The fact that he was working – admirably hard – to return to the field certainly wasn't, but believing what the team was selling on Smith being a cornerstone to the franchise after effectively red-shirting his rookie season was understandably difficult.

I'm honored and humbled to be selected by my teammates and coaches for such a prestigious award. #ClearEyeView https://t.co/s5qjbrfrOP

While he may not be that franchise player just yet, Jaylon Smith is on track to accomplish everything he set out to as a top prospect. If healthy entering the draft, the price the Cowboys would have had to pay for Smith was the fourth overall pick they instead used on Ezekiel Elliott. 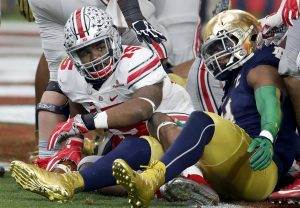 Should the Cowboys miss the playoffs this season, which is beyond their control, there will still be plenty of positives to take from a season that could have gone differently for many reasons.

Jaylon Smith is both of these things. The Cowboys have been ineffective (to say the least) defensively without their leader in Sean Lee, but Dallas can feel much better about their outlook at LB with Smith in their plans at the MIKE position for the foreseeable future.

Regardless the size of the impact Jaylon Smith made on the field for the Cowboys this season, the fact that he is a healthy football player once again is enough for his teammates and coaches to feel rewarded for their ongoing support.

This is why Smith was chosen as America's Team's nominee for the Ed Block Courage Award for 2017.

Smith has certainly earned it. Imagine how hard is it to be stuck in a 1.5 year rehab program while teammates get to go out and play. Rico Gathers is in the throes of 2 years out, although it was practice squad last year and concussion precautions this year.

But if you build a dynasty, it’s always with a franchise QB and also players down the draft who turn into pro-bowlers. That means you roll dice on project players like Gathers – even Dak – and take chances on gifted players with injury like Smith, or sometimes with trouble following them from college (Gregory).

If you take average, safe players down the draft you will not build a dynasty. Where available you take your chances on a talented player who fell, and the Cowboys subscribe to that. I was surprised how fast Smith got his speed back this year. There was a play around Week 5 maybe, where the opponent had a long gain down the field and Smith was flying in pursuit.That made me believe a full recovery is in progress. And he might be great as a spy LB against a fast QB like Russell Wilson, or the way Kaepernick was.

The Seahawks are getting no betting respect after being routed by the Rams, and are 5 point underdogs tomorrow. I think they may be ready to fold up the season if Dallas gets a big first half lead. You have to believe the Cowboys frame of mind is totally opposite, they get Elliott back and I think will get it going early / 31-17 final.

Btw Sean, if the Cowboys make the playoffs it might be time to get Gregory out of mothballs… ;^)