The Dallas Cowboys have only picked in the first round of the NFL Draft with the 28th overall selection once, back in 1978 selecting Michigan State DT Larry Bethea. As we rapidly approach the 2017 NFL Draft, the Cowboys are slated to pick at 28 again thanks to their 13-3 campaign in 2016, but will they stay home late in the first or look to move out of the pick?

A drastic change from the fourth overall pick that kept Cowboys Nation talking about – at best – the same six or seven names in the first round, plenty of enticing options have been discussed at the back-end of the first round this year. With that said, it sounds like Jerry Jones is more than prepared to use this 28th overall pick – one that could see plenty of defensive talent remaining on the board at positions of need for his team like CB or DE – in a trade situation to slide up or down the draft order.

Jerry Jones on 28th overall pick: “This sets up for a little potential trade action to try to gain some value or try to hit an opportunity.

With the strength of this draft being the overall depth on the defensive side of the ball though, trading down from pick #28 might make a lot of sense for the Cowboys. The last time they did so, they entered the 2013 Draft with the 18th overall pick. Trading it to the San Francisco 49ers, the Cowboys positioned themselves with the 31st pick to draft Wisconsin center Travis Frederick.

Thought of as a reach at the time by draft analysts everywhere, Frederick has become a 3-time All-Pro and Pro Bowler – anchoring the stellar offensive line that Dallas has built in the draft. In making this trade down, the Cowboys acquired an extra third round pick, used on WR Terrance Williams at 74th overall. Six picks later, they landed safety J.J. Wilcox.

Say what you want about Terrance WIlliams, but his recent four-year extension with the team proves how valuable he is for the Cowboys’ offensive continuity. Having also gotten production out of Wilcox prior to him leaving this offseason for the Tampa Bay Buccaneers, its safe to say that recent history with the Cowboys trading down for extra value in the draft has worked out well.

Pair this with Dallas’ 2016 haul of four starters, a potential heist in Jaylon Smith, and hopeful prospects like Kavon Frazier, Charles Tapper, and Rico Gathers, and the excitement builds further for April 27th’s start to the 2017 NFL Draft. 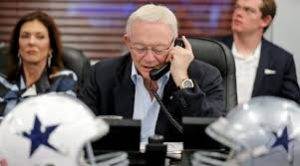 Adding to this excitement is the fact that the Cowboys and Jerry Jones could also target a player at the top of this talent pool, giving up their second or third round value to make a move from 28 towards the top of the first round. Whether or not the Cowboys are one player away on either side of the ball from contending is an interesting debate, with their need for depth primarily in the secondary a large one.

Perhaps dead set on finding his “war daddy” pass rusher though, Jones and the Cowboys may play themselves into position to add a difference making player to their defense in this draft.

Recent history with a move like this hasn’t been all that favorable for the Cowboys however, as their last trade up saw them go from the 14th overall pick to the 6th in 2012. Using this top-ten pick on CB Morris Claiborne, who started just 43 games over his five seasons in Dallas, didn’t work out as expected.

The Rams landed Michael Brockers with the Cowboys’ original first-round pick, trading the extra second-round pick acquired to the Bears to slide five spots down in the same round and take now-Giants CB Janoris Jenkins with one of three 2nd round picks.

According to this trade value chart,  the Cowboys’ 28th overall pick is worth 660 points. Their 60th overall selection is worth 300 while the third-round pick at #92 overall is worth 124.

For some perspective, all of these picks combined are worth 1,084 points, which could roughly get the Cowboys into the top 15 of the draft order. With the 15th overall pick being worth 1,050 points, it is often this trade value chart shocks fans with how tough it can be to get these deals done at some stiff prices.

If its a hard sell that the player the Cowboys can land at 15 is that much better than the one’s that might be available at 28, you should focus on the value of the Cowboys’ current picks and see what other teams would have to pay to come up and slide Dallas down for extra value.

In total, the Cowboys’ five picks through the first six rounds are worth 1,130.5 value points – with 7th round selections not factoring into this chart.

Every draft is a new opportunity for 32 NFL teams though, and the Cowboys will enter this year’s as the talk of the league after dominating this event in 2016 and seeing immediate results. Another draft haul like this one could see the Cowboys cement themselves as a league power, or even just by landing the right star prospect to wear the star in a trade situation.

No matter the case, the Cowboys’ 28th overall pick could end up just about anywhere. Let’s hope its Super Bowl LII.

Tell us what you think about “Jerry Jones Sees Trade Potential with Cowboys’ 28th Overall Pick” in the comments below. You can also email me at Sean.Martin@InsideTheStar.com, or Tweet to me at @SeanMartinNFL!