This is very interesting knowing that just yesterday the Browns were aggressively trying to trade him. Haden, who once looked like one of the league's elite corners, has dealt with his fair share of injuries the last few seasons, but when healthy, he is still a very talented starting cornerback.

The Cowboys of course didn't call Cleveland regarding Haden but now that he's a free agent does that change anything? According to Mike Fisher of CowboysHQ.com it does…

Waivers not in play here. HADEN can go to most favorable bidder. #Cowboys tell me they're interested https://t.co/0kwu73ba9f

As we all know with the Cowboys, price matters, but with plenty of cap space to play with I really wonder if the Cowboys would consider bringing in the former Pro Bowler on a deal to help seal up this talented, but very young secondary. 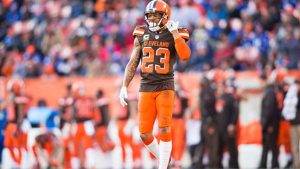 One thing he does do that the Cowboys' secondary has struggled with recently is get turnovers. In his seven years in the league, he has 19 interceptions, that averages out to 2.7 interceptions a season.

The only question that leaves me with pause is do the Cowboys have the room on their depth chart to add a player of his caliber?

Currently the Cowboys CB depth chart looks something like this:

If Haden was to sign, it would likely mean Sammy Seamster and Marquez White would not make the final 53 man roster and Jourdan Lewis may get placed on IR depending on the severity of his hamstring injury.

Joe Haden might not be what he was three years ago, but he's a starting cornerback for this team and would be a huge upgrade over Nolan Carroll.

Do you think the Cowboys should sign Joe Haden?

Connor Livesayhttps://insidethestar.com/
Born in 1995, loved Football but more importantly the Dallas Cowboys since day one. Living in Redskins Country flying the Blue and Silver flag as high as possible. Covering the Dallas Cowboys for InsideTheStar.com and CowboysNation.com. Catch me on twitter @ConnorNFLDraft!
Previous article
BREAKING: Cowboys-Texans Preseason Game Cancelled
Next article
Report: Elliott’s Suspension Appeal Scheduled to Last Through Thursday

yes…one year deal with incentives, that way it doesnt press the team with the upcoming martin extension that will be needed

Everyone might as well not get too excited about CB Joe Haden. Stephen Jones is already saying they may or may not sign him. It will depend on money. Well that means Stephen and Jerry will sit and watch Haden sign else where because as usual they want something for nothing. They shouldn’t break the bank on him, but at least offer him a fair contract. Jerry and Stephen keep bragging about how good this young secondary is really? Let us examine these players: McFadden (the CB) was put on IR today, Orlando Scandrick can’t play forever and he has had some trouble with injuries, Nolan Carroll could be suspended for a DUI arrest this summer, Anthony Brown did pretty well last season, but is he a starter? Then come 2 no names in Sammy Seamster and (R) Marquez White, and finally (R) Jourdan Lewis who was supposed to be such a steal has yet to see the field with a hamstring injury and may also end up on IR. There is (R) Chidobe Awuzie that has played pretty well. Out of 8 CB and all of the issues Dallas will end up with maybe (3) who are ready to go. Scandrick, Brown, and Awuzie. If they don’t sign Haden this young secondary is going to get lit up this year

Too late The steelers got him