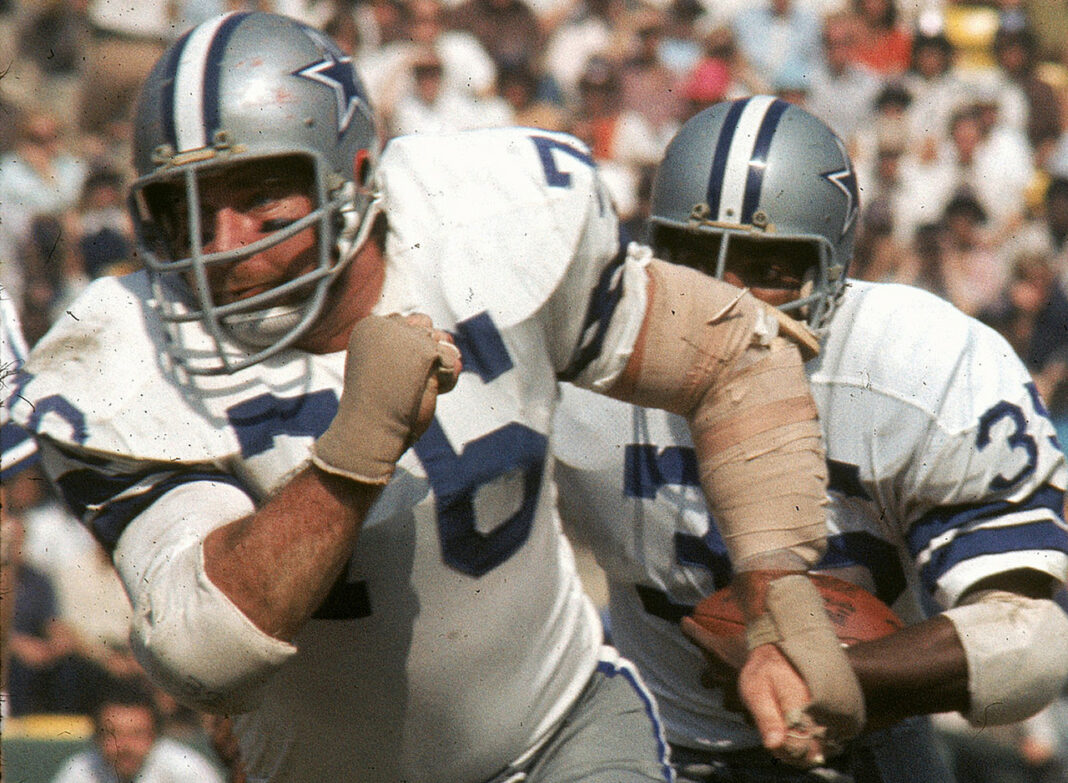 There are officially 76 days until the toe meets the ball at AT&T Stadium where the Dallas Cowboys will host the New York Giants on NBC’s Sunday Night Football.

It’s Monday, which means that we’re all wondering where the weekend went and how it can possibly be so far away…again. There are ways that we can cheer ourselves up: peanut butter and jelly sandwiches for lunch, re-watching underrated comedy Saving Silverman, or talking about the Greatest 76 in Dallas Cowboys History.

The following players have all worn 76 for the Dallas Cowboys:

Some premiere guys in Dallas Cowboys History have worn the number 76, most of them being offensive linemen. In order to determine who the best of the bunch is we need to closely examine two specifically: John Niland and Flozell Adams.

The 1998 NFL Draft yielded the Greatest 98 in Dallas Cowboys History Greg Ellis in the first round. The second round was no slouch as it gave us offensive tackle, Flozell Adams. Flo would have been taken higher in that ’98 Draft, but he is partially deaf in his right ear and that scared some teams off. King Jerry Jones wasn’t intimidated and put a Star on his hat.

Flozell, like a lot of offensive linemen, made the switch to left tackle during his sophomore season. Adams was one of the apples of Coach Bill Parcells’ eyes and truly found his form under the Tuna. NFL History was made in 2002 as, what many believe to be was the first time, all five of the starting offensive linemen for the Cowboys were African American (Left to Right: Flozell Adams, Kelvin Garmon, Andre Gurode, Larry Allen, and Solomon Page). While it seemed as if Flozell Adams seemed to average two false starts a game, he missed only 14 games (10 due to an ACL tear in 2005) and was selected to 5 Pro Bowls in his 12-year Cowboy career. Only Larry Allen (10), Rayfield Wright (6), and the guy who edged out Flozell for Greatest #76 have been selected to more Pro Bowls in a Cowboy uniform.

John Niland, aka Johnny Nightlife, was the fifth overall selection of the 1966 NFL Draft. He had the pleasure of lining up on the offensive line against Pro Football Hall of Famer, and Cowboys legend, Bob Lilly in practice…which helped Niland become an all-time great. He was a member of the Cowboys teams that lost the first two NFC Championship Games to the Green Bay Packers (including the historic Ice Bowl at Lambeau Field). Niland helped the Cowboys reach a level of respect across the NFL at a time when the NFL-AFL merger was just taking place. The Cowboys eventually reached (and won) the Super Bowl behind Niland’s blocking, largely in part to the running of halfback Duane Thomas. That production was made possible only through the holes that Niland blew open for him.

John Niland took the trip to the Pro Bowl 6 times. He has a Super Bowl Ring to his name and is the Greatest 76 in Dallas Cowboys History.

Check back tomorrow to find out who the Greatest 75 in Dallas Cowboys History is!