This year’s Draft Class is very good. The Cowboys hauled in a lot of defensive players, along with a steal for the offense in Ryan Switzer, but more than a month later doubts inevitably come.

Did the Cowboys address the team’s pass rush need correctly?

Is Taco Charlton going to be our new RDE, or just another LDE?

How many of these rookie DBs are actually going to be starters?

Why Haven’t the Cowboys Signed Jourdan Lewis Yet?

Out of their nine selections in 2017, only one remains unsigned: third round pick Jourdan Lewis. The Cowboys are not the only team in the league with unsigned draft picks, but this is a bigger story for two reasons.

First of all, this is the Dallas Cowboys. The spotlight is always on.

The second reason though, is a serious one. Jourdan Lewis is facing domestic violence charges. He probably would’ve been a second round pick if he wasn’t involved in an issue like this.

This article is not to discuss what he is being accused of, or whether he’ll be found innocent or not. Lots of fans are concerned about Lewis remaining unsigned in June. That is 100% reasonable and I completely understand it.

Some think that he hasn’t signed a contract because of his legal situation. This has been a concern for a lot of fans and it really doesn’t look to be that big of a deal. Stephen Jones mentioned that third round picks were a bit more tricky regarding guaranteed money. That makes a lot of sense, though I’ll admit I was skeptical of this at first.

So I did some research.

Comparing to Other Team’s Situations

I decided to analyze the entire third round from the 2017 NFL Draft and compare the Cowboys’ situation with the rest of the league.

There are eight third round picks who have yet to sign their contract with their respective teams. It’s worth noting that several other picks from the third round only recently signed in June.

Something interesting is that of those eight unsigned third round players, five of them are the last of their team’s draft picks to sign. Included in those five, of course, is CB Jourdan Lewis. It’s fair to assume that, in comparison with the rest of the NFL, the Cowboys are not in a bad situation, let alone a concerning one.

We don’t even have to look at other team’s situations to feel better about Lewis remaining unsigned. 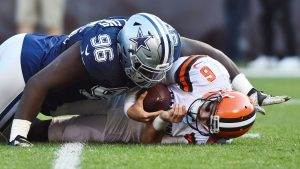 Last year, Maliek Collins (third rounder) was the last to sign. He didn’t even sign in June; the Cowboys waited until July.

A year before, in 2015, the Cowboys didn’t sign the whole draft class until June 11th.

I’m not saying the Cowboys shouldn’t be a bit worried about Jourdan’s legal situation, I’m just saying I don’t think him still being unsigned is a reflection of it. We won’t know what will happen regarding the charges he is facing until at least July.

For now, let’s hope he is innocent. Let’s wait for his contract without panicking. And let’s wait to see him wear that Star on his helmet.

What do you think of Jourdan Lewis remaining unsigned?

Let us know in the comments below, or tweet me @PepoR99 and let’s talk football! If you like football and are looking for a Dallas Cowboys show in Spanish, don’t miss my weekly  live show Primero Cowboys!

Tell me what you think about “Jourdan Lewis Remaining Unsigned Shouldn’t Be a Concern” in the comments below, or tweet me @MauNFL and let’s talk football! If you like football and are looking for a Dallas Cowboys show in Spanish, don’t miss my weekly Facebook Live! show, Primero Cowboys!