The Dallas Cowboys offseason is a long stretch of time where we all feel like we're starving for America's Team-related action, and we've got a nice bit of it here for you today. Cowboys QB Dak Prescott joined Mississippi State's “Bully Pulpit” Podcast with Matt Wyatt to discuss a variety of things.

You can – and should – listen to the entire 24-minute interview, but there are a lot of highlights to glean from it in case you find yourself particularly busy this weekend. The podcast gets started with Prescott discussing how life is for him these days and what he's doing mentally to prepare for 2017.

Dak: It’s a lot of relaxing time. It’s down time. This is my time and my period just kind of to get away from the game. I kind of starve myself from the game right now so when I get back in and when we start working out here in the next couple of weeks that I’m in it, I’m energized. So right now it’s either hanging out with family, video games, something real light… not to stress myself out but just to kind of get away from everything and relax.

Matt: It’s really interesting to hear you say kind of, starve yourself from the game… intentionally. Like almost if you were to look at it from a religious standpoint like fasting on purpose to kind of make you hungry for it when you get back into it, a very intentional move on your part. 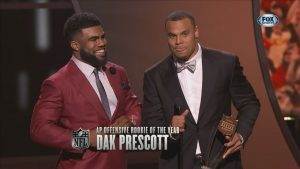 Dak: I’ve always felt like when you get time away from the game, you’ve gotta get away from it. When you do anything, when you do anything repetitively, non-stop without a break it gets monotonous. As much as you want to claim you have the energy for it and it never gets old, that’s not realistic. So for me it’s just, it’s a fast- I love the game more than anything. I always want to have the most energy, the best attitude going into a locker room, or going into a workout. So that’s what I’ve found to be the best way to keep my energy, is to get away from it when it’s time and be ready to go.

Dak: I haven’t changed, the people around me changed. More people started to know who I am, more people try to come up to me for pictures, or autographs, or something like that. But I can’t say that it’s just been that big of a difference just for the simple fact that I try to keep myself secluded as much as I can. When I go out in public I know what comes with it is just part of the territory so I’m expecting to take pictures, I’m expecting to sign some autographs, but for the most part it’s been fun. Nothing’s really changed drastically that I can say it’s overwhelming or anything like that, it’s just been a fun, fun year.

Later in the episode, Dak is asked about his best game ever at Mississippi State. He first cites when the Bulldogs went to Louisiana State and came out with a huge victory on the road (September 20th, 2014), one day later his future team would storm back for their own epic win after falling down 21-0 in St. Louis against the Rams. Dak goes on to say that perhaps his most prolific collegiate contest was a win at Arkansas his senior year. That day the future Cowboys QB would do something he only ever did once for MSU – throw five touchdowns.

40% of Dak's 5-touchdown day belonged to Fred Ross as well, who totaled 10 catches for 154 yards with those two scores in the big MSU win. Fred Ross is a name we've seen come up a few times as a potential Dallas Cowboys Draft target, as many fans are hoping for a potential reunion in the NFL.

One of the neater points of the podcast is when Matt gives Dak three choices to choose from in terms of the best throw of his rookie season. These are throws that Matt has pre-determined and lists them off for Dak. You can listen to the call of the third one within the podcast and see the other two below.

Listening to Dak Prescott on Bully Pulpit lets us get to see a little bit more about who he is. He discusses his offseason life, where he came from, what's important to him, and even how his Christmas tree was decorated a few months ago. If you're a card-carrying member of Cowboys Nation, you absolutely want to listen.

RJ Ochoahttp://OchoLive.com
I like long walks on the beach, mystery novels, no just kidding those suck. The Dallas Cowboys were put on this earth for us all to love and appreciate. I do that 24/7/365. I also love chicken parmesan. Let's roll. @RJOchoa if you wanna shout!
Previous article
Cowboys Salary Cap: Jason Witten is Beloved, but Burdensome
Next article
If Cowboys Aren’t Smart With Tony Romo, He Could End Up Burning Them

Every now and then, a transcendent and authentic star is born! That person would be DAK!