One of my favorite “draft analysts” Matt Miller recently released his first 2017 post-combine 7-round mock draft, and as a Dallas Cowboys fan, I was interested in seeing which player he chose in each round for America’s Team. I’ll be the first to admit that I wouldn’t be too terribly upset if Miller’s selections for the Cowboys actually came true after the completion of the 2017 NFL Draft.

Matt Miller pretty much covered all of the positions that really need to be addressed for the Cowboys, and did so with some really good players that can come in and start as rookies. I personally would’ve went a different direction with a few of his selections, but that’s what’s fun about these mock drafts.

A few of the players that Miller selected for the Dallas Cowboys were available because of the way they were able to perform at the 2017 NFL combine this past weekend. Some of these prospects improved their draft stock, while others will need to improve their numbers at their College Pro days.

Continue reading below to see who draft analyst, Matt Miller, selected for the Dallas Cowboys in this 2017 mock draft. 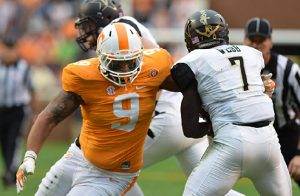 Derek Barnett’s draft stock likely took a hit this past week because he put up some head scratching numbers in a lot of the drills he took part in. But, I don’t think you would hear very many Dallas Cowboys fans complaining if Barnett was available at the end of the first round.

Barnett’s combine numbers didn’t really match up to what you see from him when studying his game film. This is likely due to the fact he was sick and couldn’t keep anything down a couple of days before he took the field in Indianapolis. To his credit though, he came out and competed anyway, but it looks as if his performance was unfortunately uninspiring.

Barnett still has his college pro day to prove to teams that he is still one of the better DE prospects in the 2017 draft. But, if this is indeed the way things turned out after Day One of the 2017 NFL Draft, I’m sure a lot of Cowboys fans will be doing cartwheels. 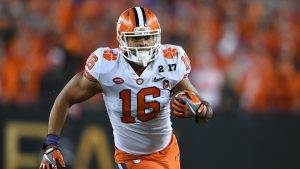 Miller’s selection of tight end Jordan Leggett for the Dallas Cowboys in the second round is the first time in this mock draft I would’ve probably gone a different direction. I’m just not sure how much the Cowboys think they need to upgrade the TE position. Don’t get me wrong, Leggett is a really good player, but I just think there are other positions that need to be filled first.

Jordan Leggett is a physically gifted TE that checks all of the boxes you look for in a NFL tight end. He has the size, speed, and hands to be a dangerous weapon in the passing game, but needs to improve as a blocker. The only negative I have heard about him is he has been questioned about his desire to play football and that he can sometimes be lazy. 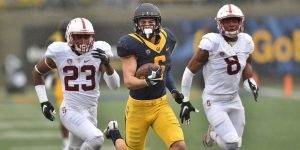 Chad Hansen is another player that probably took a bit of a hit to his draft stock due to his performance at the scouting combine. He ran a 4.53 40 yard dash, which was somewhat surprising because he looks much faster when studying his game. I personally thought he would run in the low 4.4 range, but he has a chance to improve at his pro day.

Hansen would be a tremendous selection for the Cowboys in the third round. He fits all of the size/speed parameters they look for in their outside wide receivers. He really just has one year of production at California, but he faced some of the best cornerbacks in college last year and came out on top more times than not. 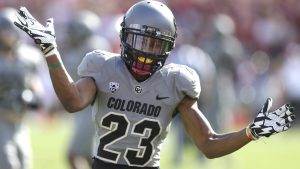 The Dallas Cowboys would probably like to address the cornerback position earlier than the fourth round, but you can’t argue with Matt Miller’s selection of Ahkello Witherspoon. He is exactly the type of CB the Cowboys like on the outside.

At 6’3″, 198 pounds, Witherspoon would add some much needed length to the position and would probably be a day one starter. He ran a 4.45 40 yard dash and was a top performer in the vertical jump (40.5 inches) and the 60 yard shuffle (11.60 seconds). He does need to clean up his technique and become more physical, but that should come in time with the proper NFL coaching. 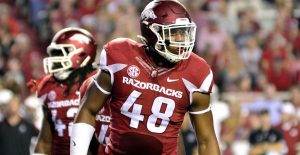 I’ll be completely honest and say that I’m not a big fan of Deatrich Wise. He has the size (6’5″, 274) that you look for in a 4-3 DE, but he wasn’t very productive in college and will likely struggle in the NFL.

Wise is a stiff athlete, but I can understand why Matt Miller selected him for the Dallas Cowboys. In the sixth round and beyond, you’re looking for attributes that teams in the NFL can hopefully develop in hopes of turning the particular prospect into a contributor. Wise has those attributes, but there are other players in the sixth round that I believe could come in and have more of an impact as a rookie. 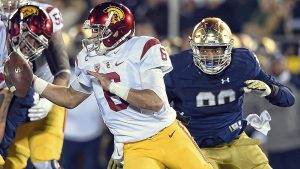 Isaac Rochell is the type of player that defensive coordinator Rod Marinelli will love. He has a nonstop motor and a blue-collar work ethic. There’s nothing special about his game, but if he can develop his pass rushing skills, he could develop into a potential starter in the NFL.

At 6’4″, 280, he could be both a base 4-3 DE or a 3-technique with the Cowboys. That versatility could earn him a rotational role along the defensive line as a rookie while he perfects his craft under Marinelli’s tutelage. 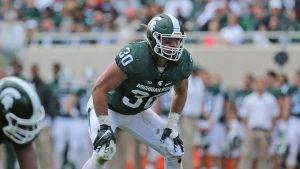 Riley Bullough’s best bet make an NFL roster is as a special teams player. He is a bit undersized at 6’2″, 226 pounds to be a starting middle linebacker in the NFL, but he has a tenacity about him that coaches will fall in love with.

Studying him on tape he shows his football smarts and an understanding of his run fits, but because of his size he gets bullied by offensive lineman. He could develop into a good backup LB, but he’s going to make his living on special teams in the NFL.