After New England Patriots quarterback Tom Brady brought his team from 25 points down to steal the Super Bowl from the Atlanta Falcons, Fox Sports commentator Joe Buck stated that the Patriots had “redefined momentum here tonight.”

It was an incredible comeback, and one that will be remembered forever in football lore. But in terms of Joe Buck’s statement, some exception must be taken by the audience. In reality, the Patriots may have just validated the basis for this research, not re-defined momentum.

We constantly here about “momentum” in the NFL. In 2016, after a 13-2 start, the Dallas Cowboys decided to rest their starters prior to a bye week. They proceeded to lose their final two games, and caught plenty of heat from fans and media about giving up their momentum.

To address both Buck’s comments and the comments of sports pundits everywhere, we ask; is momentum real or merely in the eye of the beholder? Could “momentum” simply be an illusion, and not something that effects game results?

In order to answer these questions, Dr. John Ruscio and I analyzed between game NFL data between the years of 1978 and 2016. The complete sequence of wins and losses for each team’s season was found on ProFootballReference.com, for a total of N = 1,169 seasons.

Finally, to restrict analyses to wins and losses, all seasons that contained a comparatively rare tie were omitted from the data set, resulting in the final sample of N = 1,075 seasons. Data for each team’s season included all regular season and playoff games. Wins were coded as 1, losses as 0, ties as .5, and bye weeks as 2.

In simpler terms, if a team had went 10-6, we used re-sampling techniques to create chance level data by shuffling those 10 wins and 6 losses around to random sequences 1,000 times.

Through a series of statistical analyses, we examined a few hypotheses.

First, do bye weeks affect momentum? Assuming the momentum effect exists, then bye weeks should disrupt or end streaks. Next, does the number of runs in a season differ from chance? Momentum would predict a smaller number of runs per season than expected by chance, as team’s streaks will be clustered together.

What we found disputed all conventional football wisdom.

First, when analyzing bye weeks, we found they had no negative effects on the outcome of a team’s next game. In fact, bye weeks actually increased winning percentages post-bye week from about 3%.

So, instead of “killing” momentum, it appears that bye weeks go a long way in improving a team’s chances to win the very next week. Still, more research should be done before concluding anything too definite about bye weeks.

Let me skip down to the most important of our results, however, since I know this is getting a bit boring for most. Most prior momentum research in sports has tested things similar to us, but our most unique research came when asking how many previous games best predict the outcome of a team’s next game.

Everyone seems to believe that if you’ve won two in a row, you’re much more likely to win game three than if you’ve lost the previous two games. However, statistical theory would predict the team’s first 7,8,9…16 games would be better predictors of future performance than the team’s “latest” game. 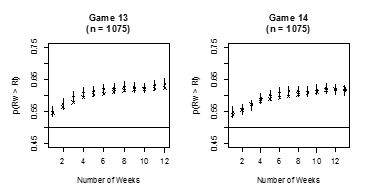 Here’s an example of two of our graphs. As you can see, they both have upward slopes, meaning that as the season progresses, predictions for the team’s next game become more accurate. There is also a good match between the observed results (actual NFL data) and our chance-level expectations.

In other words, it’s time to retire the recency bias and reactionary analysis we get in sports. Just because the Cowboys may have lost week one, that doesn’t mean they are about to spiral down for three or four straight losses.

The true predictor of a team’s value comes weeks into the season. For example, when the Cowboys get to 11-1, not when they are 0-1. Patience should be preached, as it is clear the public overreacts to “momentum” after each game.

I know this all is a bit nerdy, but I hope you guys can enjoy a statistical look into the sport we all love. This upcoming year I will be working on coding and analyzing within-game momentum in the NFL. For example, how does a turnover or a dropped pass effect the result of the ensuing drive.

This will be tough, but I am excited to see what the data will say. It is certainly easier for a former football player like myself to believe in within-game momentum than it is to believe in between game momentum.