Last week, I broke down the method behind the madness of Barry Church’s key interception against the Washington Redskins last season. Continuing in this Monday Moment series, we move to week three of 2016, where the Cowboys looked to get their second win of the young season.

Leading in the fourth quarter and trying to eat up the clock, the Cowboys put the game in the hands of rookie running back Ezekiel Elliott, and their veteran offensive line.

The result? One of the most iconic plays of the entire 2016 season, and the play which really set off Zeke’s monster rookie year.

Let’s first talk about the setup behind this monster run. The Cowboys come out in 12 personnel, meaning they have 1 running back and 2 tight ends. Lining up in a single back set, the Cowboys then bring wide receiver Brice Butler in motion and stack him behind the inline tight ends.

This gives the Cowboys another run blocker in the box, and forces the Bears to stack the left side of the offensive formation.

Once the ball is snapped, it is clear the Cowboys are running their inside zone play. Up front, the offensive line’s assignments are rather simple.

Left tackle Chaz Green is faced with a 5-technique on his outside shoulder. Given this play appears to give a designed cutback option, Green and tight end Jason Witten have a deuce, or double team assignment here. It is then up to Chaz Green to keep his inside shoulder free and work up to the second level once Witten secures the down lineman.

On the inside, Ronald Leary, Travis Frederick. and Zack Martin are responsible for the two defensive tackles and the right-side A-gap defender. Without knowing how Frederick called this front, I can’t say for sure whether they labeled this backer the MIKE or WILL. But, for the sake of this write-up, and with the knowledge I do have, we can call him the MIKE, as the center typically goes after the play-side backer.

Lastly, Doug Free is big-on-big with the Bears’ defensive end. 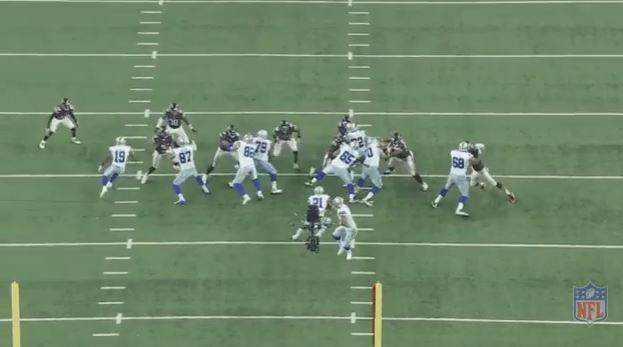 On this run, we see the brilliance and patience of Ezekiel Elliott. As you can see in this snapshot, Elliott presses his landmark of the front-side A-gap when he first gets the ball. Here he is presented with a two-way go, but realizing that Green is a bit late off his double team, Elliott goes for the cutback.

And, as is evident by the rest of the video clip, Elliott makes the right decision and comes up with a big gain and a hurdle on top of it all.

One last note. Doug Free did a fantastic job on this play of taking the defender where he wanted to go, while still controlling and washing him down the line of scrimmage. His block opened up a beautiful cutback lane for Elliott.

I sincerely hope the starting right tackle in 2017 can make these same efforts when run blocking.