The 08-09 Cowboys Defense, with the exception of two changes, looks very similar to last year’s defense. The most highly publicized change has been the upgrade in the Dallas secondary. With the additions of number 1 draft pick Mike Jenkins, and the off-season trade for Adam Jones, joining the team, these two players should change the defense entirely. Along with undeniable skill, they bring with them a fierce bloodthirsty mentality, which this team has been missing for a long time. Neither of these guys has shown any reluctance to smack their opponent upside the head!

Mike Jenkins is an incredible man defender, he is a guy that you can put on an 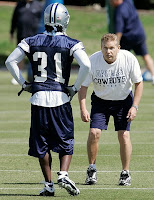 island and let him take his man out of the picture. So far from what I have seen he has two areas of improvement that need to be addressed. The first area of concern his occasional tendency to bite very hard on a double move. Once he gets more attuned with the NFL game a lot of this will take care of itself. The second area of concern with Jenkins is his zone coverage play. Let us not forget, he is a rookie and I am sure he has never seen a playbook quite this big, nor with this many reads to make. Our resident offensive coordinator is a Princeton grad, if a typical NFL playbook was 200 pages, I’m guessing his is 700. It is very evident to me that he has found himself a mentor, and he is responding extremely well to him. That mentor is none other than Terrence Newman! This floored me at first, not that Jenkins had a mentor, but more that it was Newman. Newman has always been very reserved and not much into teaching another corner how to play his position, especially one that will, one day, be trying to take his job! What has made Newman more willing to counsel the young up and comer?

Adam Jones, as we all know, has not been reinstated. Yet! I say yet because I believe it is merely formality. He, like Jenkins, is strong man defender with an attitude. I have been pleasantly surprised by this guy’s work ethic. For a man who has been in all sorts of trouble, doing very immature things, he is coming across now as a throwback player. The league used to be full of players that were, shall we say, “lunch pale” kind of guys. Adam Jones clearly falls into that category. I know, I know, we all see the flashy “Pac-man bout to make it rain up in here” things. These things may be who he is off the field, but on the field he is nothing like that. Now has he suddenly appears to have become a better person off the field. Whether that is true or not, well that I do not know. But from what I have seen so far, if I had to give an answer, I would say probably he has cleaned up his off field act. People do come equipped with the ability to change who they are, and it is not up to you or I to judge anyone. He will have his day when he is judged. So now the next question becomes: Why is he apparently changing now and not 6 months ago?

In my opinion, the second substantial change to this defense is the principle difference! It is an addition that has not received a great deal of press and I certainly did not realize the impact that it would have. Dave Campo! Yes, Dave Campo! He may very well turn out to be the key acquisition for a run at the Super Bowl. Everyone, including myself, dismissed this guy. My opinion of him has always been: “How can he be the right man to turn a sorry secondary into a “Super Bowl Champion potential” secondary, when he failed miserably as the team’s head coach”? Something I even neglect to remember sometimes is that when Campo took over as the head man, he acquired a very shitty football team. The players on that team loved Campo and they played hard for him. They simply were not NFL playoff caliber players! In the end, it cost him his job, but was it his fault entirely? My answer is NO! And I believe that if people within the organization were asked they would say the same thing. This, however, is nothing new for the NFL. Coaches get fired all the time when they do not win, no matter who is to blame! This guy has taken a mentally weak secondary and given them something that they have not seen at Valley Ranch in a long time; confidence! Even when they were winning Super Bowls, and were absolutely dominating teams, the secondary as a unit never had the confidence that they are showing now! That’s right I said never. And that includes when Prime Time was here. Prime Time was the only one who had confidence or game for that matter. This team is different, and I for one believe it is instigated by one Dave Campo. So to find the answers to our questions about Newman and Jones, You need look no further than their leader!