All eyes were on the Dallas Cowboys offense in Thursday night's meeting against the 5-6 Washington Redskins. After three dreadful performances (combining for only 22 points in three games) the Cowboys' offense turned it around in a big way putting up 38 points in a huge victory over the division rivals.

While the offense did look more like the Cowboys offense we're all accustomed to seeing, the defense deserves a lot of credit for the 38-14 victory. 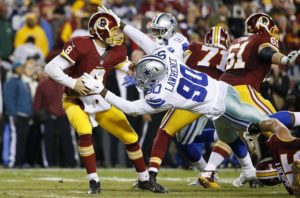 In Thursday night's win, the Dallas defense held Washington to just 14 points. The Cowboys' pass rush brought consistent pressure all night, sacking Kirk Cousins a grand total of four times (DeMarcus Lawrence – 2, David Irving -1, Taco Charlton – 1). They also played the run very well against a running back who had 217 yards in his last two games. The Dallas rush defense held Samaje Perine to just 38 yards on 12 carries. Washington had no choice but to abandon the run early in the game.

Along with the pressure the Cowboys' defense consistently put on Cousins, they picked him off twice. Jeff Heath recorded his second interception on the season when he picked off a ball that bounced off Jamison Crowder's hands. Heath has a knack for being in the right place at the right time, and that was exactly the case here. That was a big turnover for the Cowboys, because Washington was driving and was looking to grab an early lead in the game.

The second interception on the night sealed the victory for the Cowboys' when Anthony Brown intercepted a deflected pass by David Irving at the line of scrimmage. That was a huge play for Anthony Brown, who had been demoted earlier in the week. Playing cornerback in the NFL is all about having confidence, hopefully that play could rejuvenate the second year corner.

If the pass rush and interceptions still didn't impress you, maybe the Dallas defense and special teams forcing fumbles did. There were three forced fumbles by the team, two on defense (DeMarcus Lawrence and Taco Charlton both forced fumbles on their sacks) and one on special teams. Kyle Wilber was able to knock the ball out of Jamison Crowder's hands on a punt return with 4:25 to go in the first quarter. This turnover set the Cowboys up with great field position in a no score game.

Even with all the sacks and turnovers, the most impressive thing about the Dallas defense was how clean of a game they played. There was only one or two instances where there looked to be miscommunication or missed tackles in the open field. That is what has killed the Cowboys so far in 2017.

The best part about the defense's performance, was their ability to play four quarters of football. In the last three weeks the Cowboys' defense has played great in the first half, but absolutely fell apart in the second. That was not the case on Thursday night.

Some of the biggest standouts from Thursday night's win were from players who haven't seen much of the field in 2017.

Chidobe Awuzie was absolutely fantastic in his first start of his young NFL career. Awuzie finished the night with three tackles and three passes defended. The rookie from Colorado showed his ability to break on the football, his ball skills in coverage, and most importantly the ability to stay healthy. The Cowboys will look for Chidobe Awuzie to play a big role in the last four games of the 2017 season, especially with Orlando Scandrick likely to miss some time.

ICYMI: Recap with grades & stats from the Cowboys win on TNF!https://t.co/N29WPn6Hnf pic.twitter.com/CgbMSDdGPO

Kavon Frazier was another defender who really impressed me. In a limited role, Frazier finished the night with six tackles (second on the team). The second year safety made some great stops in the run game that this defense has struggled with over the last month. Frazier's ability to play down close to the line of scrimmage and help out in run support may earn him an expanded role in the last month of the season.

I'm not saying it'll happen, but if this defense plays the final four games like they played Thursday night, and the offense can keep its head above water until Ezekiel Elliott returns, this team has a chance to make a playoff run with four games left.

The coaching staff looks like they are making some adjustments, and Rod Marinelli may have found a winning formula with what he played with against the Redskins. The players will have another chance to prove themselves when the Cowboys take on the Giants in 10 days.

Connor Livesayhttps://insidethestar.com/
Born in 1995, loved Football but more importantly the Dallas Cowboys since day one. Living in Redskins Country flying the Blue and Silver flag as high as possible. Covering the Dallas Cowboys for InsideTheStar.com and CowboysNation.com. Catch me on twitter @ConnorNFLDraft!
Previous articleCowboys’ CB Chidobe Awuzie Impressive In First Full-Time Action
Next articleTakeaway Tuesday #TNF Edition: Awuzie Killed It, Running Game Is Back

The Dallas Cowboys’ playoff hopes appeared to be on extremely thin ice just two weeks ago, but things can change quickly in the NFL....
Read more