Given it is the offseason, this becomes a valuable time to look around the league and analyze who the Cowboys will be up against in their upcoming campaign.

Of course, the most important off all their match ups come within their own division, as they play each of their hated rivals twice per year. Because of this, understanding what the strengths and weaknesses of each NFC East foe are, and where the Cowboys stack up in the divisional hierarchy is important.

Today, I kick off an important offseason series, providing an overview of each position group around the NFC East. To start the series off, we will examine arguably the most important position in football, the quarterbacks.

Let's start with the obvious.

Now that former franchise quarterback Tony Romo has retired, the Dallas Cowboys are officially Dak Prescott's team. After taking the league by storm in 2016, Prescott looks to improve further and continue his dominance during his sophomore season.

Behind Dak, the Cowboys depth chart gets pretty thin.

Kellen Moore is the current backup quarterback in Dallas, though some have speculated Romo to be the team's emergency option. Though there are some others currently on the roster, most notably former Florida Gator Austin Appleby, Dallas is most likely to only keep two QBs on their final roster.

For what seems like the one hundredth year in a row, Eli Manning is the starting quarterback of the New York Giants. A Super Bowl champion, Manning is beloved by much of the Giants fan base, but has clearly seen his play decline a bit over the years.

Still, with an abundance of weapons on the outside Manning should have little trouble ripping through most NFL defenses this year.

Behind Manning sits former New York Jets quarterback Geno Smith. While Smith had a rough go of it with the Jets, there is a chance he can resurrect his career as the backup for Manning.

The Giants also added California quarterback Davis Webb in the third round of this year's NFL Draft, and many have speculated he will be the heir to Manning's New York throne.

Though it seemed he wouldn't be through much of the offseason, Kirk Cousins remains the starting quarterback in Washington for 2017.

Cousins has gained much fanfare over the last two years, but is probably the third best starting quarterback in the division by my own rankings. After losing both Desean Jackson and Pierre Garcon this offseason, it should be interesting to see how Cousins plays in 2017.

Former Texas Longhorn Colt McCoy sits as the QB2 in Washington behind Cousins, with Nate Sudfeld fighting for the third roster spot.

As a whole, the Redskins quarterback situation is solid, with a pretty good starter and serviceable backup as well. 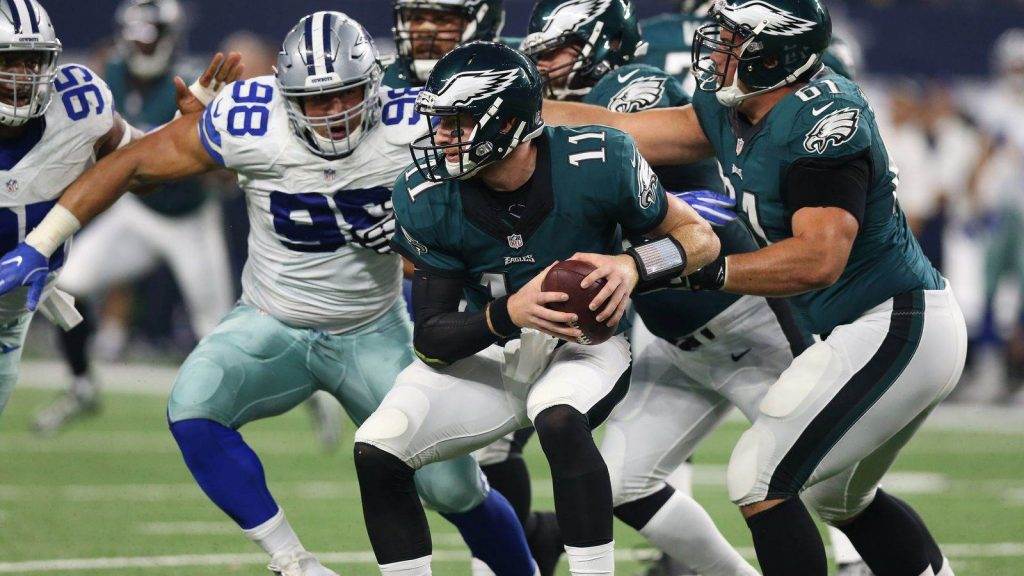 Finally, we have Carson Wentz and the Philadelphia Eagles.

Philly traded up to select Wentz second overall in the 2016 NFL Draft, and while they think they have found their franchise quarterback of the future, some critics are not-so-sure. Considering they went in the same draft, the inherent rivalry between Wentz and Cowboys QB Dak Prescott will be a ton of fun to watch through the years.

The Eagles also brought Nick Foles home to Philly to be the backup quarterback this season. Overall, Philly must depend on a young guy to get it done in 2017, but Wentz did flash signs of being worthy of such a high selection during his rookie season.

How I Rank Them

To me, this is pretty simple. While Eli Manning is the veteran of this group, and Kirk Cousins has been a good starter over the last two seasons, Dak Prescott is the best and most talented quarterback in this division.

As an overall quarterback situation, I like what Washington has going for them with the best backup QB in the NFC East. Still, Dak Prescott should be the best starter out of the bunch in 2017, and is in the most comfortable situation offensively.

Maybe I'm a little biased, but his play last year earned him this top spot to me.

Kevin Bradyhttps://kevinrobertbrady.wordpress.com
Die-hard Cowboys fan from the Northeast, so you know I am here to defend the 'boys whenever necessary. Began writing for a WordPress Cowboys Blog, and have been with ITS since 2016.
Previous articleShould Dallas Cowboys Pursue Former Draft Pick Darius Jackson?
Next articleCowboys en Español: 14 Millones Más Para Dallas, Sobre Nolan Carroll

I think K Moore is a solid 2nd team backup but with limited experience and reps. I wouldn’t be surprised if K Moore out played Dak Prescott in preseason games. With Dak Prescott and K Moore, the Dallas Cowboys may have the best QB team in the NFC east. What K Moore needs to get critics off his back is to be able to play and prove himself. This almost happened last year, but may never happen. K Moore’s performance in three and one half games in 2015 was mediocre overall but this was his first time playing against 1st team defenses with limited reps to get ready. Per S Linehan he did some really good things and was able to move the ball but made too many mistakes. Before criticizing this performance it needs to be compared to other starting QBs in the NFL for their first three and one half games.