Tyron Smith's return to the Dallas Cowboys may wind up being only temporary. The offensive tackle reinjured his left ankle in yesterday's win over the Washington Football Team and will have further testing today to determine the severity.

Smith missed three games from Weeks 9-12, two of which were losses for Dallas, dealing with the initial ankle sprain. He was forced to leave yesterday's contest after getting his leg caught under teammate Connor McGovern.

Tyron Smith’s ankle will be re-evaluated when he gets back to DFW.

Tyron seemed to be in good spirits walking back to the locker room, but there’s your injury situation to monitor heading into next week.

Not long after Tyron's exit, Dallas' other starting OT La'el Collins was ejected from the game for unsportsmanlike conduct. This left the Cowboys in the unwelcome position of having both Terence Steele and Ty Nsekhe in at the tackle spots.

The Cowboys had two 3-and-outs and a pick-six once both Smith and Collins were gone. They managed a first down on their final drive to seal the victory, but the stagnant offense beforehand allowed Washington to make things interesting.

Collins should not face any further punishment from the league after a minor scuffle, given he was already booted from the game. Even if Tyron's ankle keeps him out next week, Dallas will hopefully not be down to two backups as starters.

Further consolation; next week the Cowboys get an easier draw with the New York Giants. If there's a game left on the schedule where they can afford to be without Smith, this is the one.

Hopefully it won't come to that and Tyron Smith will resume his duties in Week 15 and the rest of the season. We'll see what today's tests reveal about his status going forward.

Time to acknowledge the end for the great one. OT has become a top position of need in the 2022 draft

Eathan your right it’s time and has been for awhile that TS retire if he doesn’t make the decision then the organization needs to make the decision for him! He has been a great player for us and now he should be able to enjoy the fruit of his labor while he is still young and start taking care of his health! I have said for the last couple of years that we need to be looking for a suitable blindside tackle but when you pay big contracts to players that are not producing you can’t afford quality linemen!

I agree on starting the process in next years draft on finding and developing another OT. Every team should always be looking to improve. But to say he isn’t productive anymore. Nah, at that point you lost me. When he is in there he is still one of the top at his position. Is his body starting to fail him, possibly. But this but this has been an ongoing ankle issue. The back is not the problem or the neck. This could be an issue with anyone and he was rolled up on and that’s when you see those injuries. It’s not that his body just gave out. This could happen to anyone. And the salary of which he gets he isn’t even in the top 15 of his position. He took a huge team friendly deal years ago. His APY was listed at 12.2mil which ranks him 16th in the NFL at LT. I know we all want him to be healthy and to stay healthy. I’m sure he wants that and his teammates but when he is in he is still elite. This isn’t a old injury from the past. It’s a brand new one. JS guys calm your tits a bit. Go DC4L

Tyron Smith is still one of the best tackles in the game when he’s healthy, so why let him go!? That don’t make any sense!! I agree we should draft another tackle, but I don’t agree that we should let Tyron Smith go!! We can draft another left tackle and use him as a backup in case Tyron gets injured, or we can use Tyron as a backup, either way, we need to keep Tyron on our team!! You don’t just drop a player that’s one of the best at his position…. That’s stupid!! And everybody wanted to do this same thing last year cause he was always hurting his back or his neck, but like I said before, the surgery he had would fix that problem and he won’t miss another game over it, and it looks like I was right so far!! Now if he was still having back and neck problems I would agree it’s time for him to retire, but that’s not the case, he’s got a minor ankle injury that was caused by his teammate!! So why would you let him go over that…. That makes no sense!! We wouldn’t even be having this conversation right now if it wasn’t for his teammate falling on his ankle causing the injury!! So again, I agree we should draft another left tackle, but I don’t think we should get rid of Tyron Smith, he’s still one of, if not the best left tackle in the NFL, so letting him go would be stupid!!

I agree CB fan that TS is still one of the best in the league but this guy has given us many years of quality play at the left tackle position! I just believe that with the injuries he has been dealing with the last couple of years ….. back , neck, now his ankle his body is breaking down and my hope for him is that he will be able to enjoy his life without chronic pain! Sure he could play several more years probably at a high level but it would just be selfish for us as fans to ride him until he folds and then he is crippled the rest of his life! It’s not so much about his ankle but his back and neck that I’m worried about!! The back and neck already might be damaged beyond fixing! I just want the best for him!! He has paid his dues as a Cowboy and in my opinion is only behind Eric Williams as the best blindside tackle in Cowboy history!! 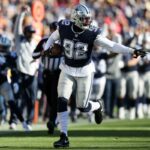 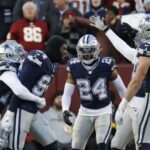