Pac Man Out & DeAngelo Hall In 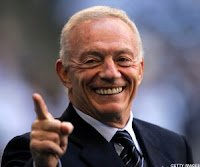 Jerry Jones just can't get enough! After dealing with Mr. Jones (prison number 69696969) and all of his issues, not to mention the poor production of Tank, and all the previous knuckle heads. Word around town is that the Cowboys and Patriots are the front runners to acquire recently released DeAngelo Hall!

DeAngelo Hall is a very talented player, unfortunately he is as big a dipshit as Pac man. Does this team really need another distraction? I do not think so. Yes this guy has that element that I previously spoke about, but is it worth the price? Is there a chance that he could come to Dallas and finally realize that he has all the tools to be great but he just needs to apply himself? YES! There also is the distinct possibility that he comes here and stays on the same track he is currently on.

So Jerry if you are reading this please take my advice, And stay the HELL away from this guy! Repair the problems that you already have don't bring more on. Stop trying to buy a championship, and start demanding better from all their at Valley Ranch. And for Gods sake get Roy Williams involved!