The Dallas Cowboys played a football game on a Sunday for the first time in what feels like forever today and it was a breath of fresh air. The ‘Boys hit the field at Levi's Stadium, site of Super Bowl 50 for what it's worth, and took on the Jim Harbaugh-less new-look San Francisco 49ers.

This game marked the second of four preseason contests and is the final road game before the Cowboys return home.

Remember that the preseason is not the time to totally dissect a team and assume that the sky will fall when it all starts to count. We're mostly examining individual performances here, not looking at the final score at the end.

Tony Romo made the start at QB but played sparingly as he handed the ball off twice and threw a short pass to Lance Dunbar. The Cowboys went 3-and-out and gave the ball to Colin Kaepernick and his Niner offense.

On defense, Jack Crawford looked solid from jump street and even had a sack. The real star of the unit though was cornerback Corey White, with his biggest moment being a touchdown break-up on Torrey Smith in the end zone.

Quarterback Jameill Showers made an impact on the special teams unit, but San Francisco was able to take the lead at the end of one, 3-0.

Brandon Weeden played in the first quarter as well, but he took a shot and went to the locker room to get it checked out. Dustin Vaughan came in and tried to lead the team, but had a hard time doing so.

Joseph Randle got a lot of the carries after Darren McFadden was done for the day and looked pretty good. On his first run he went left and cut back right for a nice gain of six yards, showing some speed in the process. Rookie Randy Gregory also looked good as he put on a couple of spin moves.

Vaughan looked flustered under pressure and on one instance threw off his back foot, a cardinal sin for quarterbacks, into the arms of a 49er who took it to the house for a touchdown. Niners held the lead at the half, 13-0.

Joseph Randle continued to get a lot of carries into the middle of the third as the Cowboys are clearly trying to see what their potential starter's got. He ended the day with 7 carries for 30 yards so it was a pretty decent day considering that he ran behind the second string offensive line.

Linebacker Keith Smith had a nice third quarter as did tight end Geoff Swaim. The Niners kicked another field goal and took a 16-0 lead into the fourth.

Early in the fourth quarter the Cowboys had a punt blocked by San Francisco's Quinton Patton who recovered it in the endzone for a touchdown making the score 23-0, Niners. The Special Teams Unit didn't exactly look Super Bowl worthy throughout the game, something that Rich Bissacia will likely address this week.

Dustin Vaughan was finally relieved by Jameill Showers and last week's sensation Gus Johnson even got in the game. The Gus Bus ran well in his first few carries, and Showers appeared average at best.

Jameill Showers hit Geoff Swaim a couple of times for some nice gains, it seems like the Cowboys have really found something in their rookie tight end. Showers also had a nice run into the 49er red zone area where he set himself up nicely.

Showers threw an 8-yard touchdown to Nick Harwell that got everyone excited. Unfortunately, he threw an interception on the 2-point conversion attempt. He would throw another interception late in the fourth quarter that pretty much ended the excitement of the game.

Overall there were some highlights on the defensive side of the ball; Randy Gregory, Ryan Russell, and Jack Crawford all looked good.

Joseph Randle and Darren McFadden will both likely get a lot of work next week against the Vikings as the Cowboys look to shore up their running back position.

It's going to be interesting to see the backup quarterback battle with Weeden injured, Dustin playing badly, and Showers showing some promise. What's most important to note is that the Cowboys walked away from this game with no severe injuries. 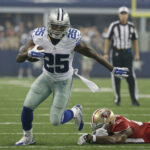 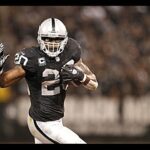