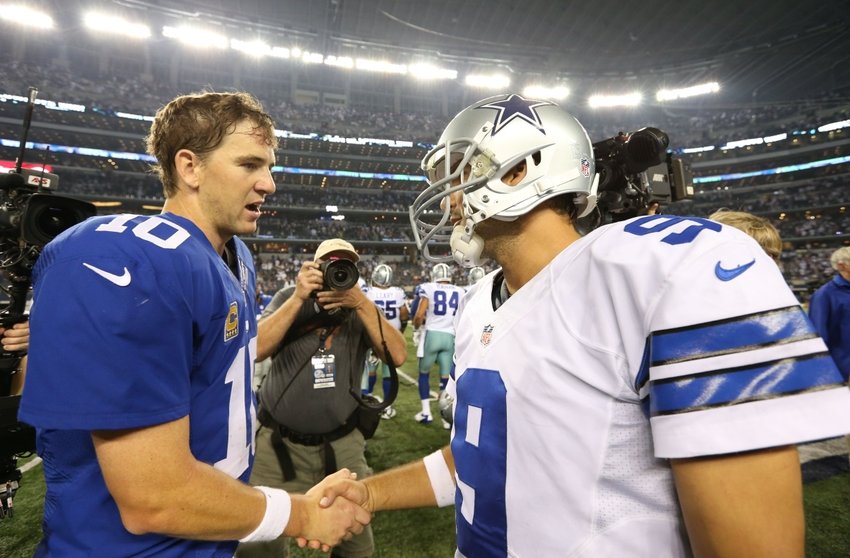 The Washington Redskins have moved on from the Robert Griffin III era while keeping the eccentric but broken-down QB on the roster as a backup.

This is sure to create even more drama in D.C. for a team that has won a total of seven games over the past two seasons.

While Jay Gruden's situation becomes more and more helpless, Chip Kelly finds himself emerged in a realm of possibilities from the QB position.

He has finally built the Eagles, particularly the offense, to fit his style of play – the same up-tempo rushing attack he utilized at Oregon.

Leading the way at QB will be Sam Bradford, who was acquired in a swap for Nick Foles with the Rams. Bradford is coming off of a great performance in Green Bay, showing promise that – when healthy – this system may give him a chance to finally succeed in the NFL.

However, it is hard to set expectations high for a team that went through as much change as they did and now turns to a QB with a long injury history.

Enter the Dallas Cowboys and New York Giants, the two teams that have won this division six of these past ten seasons.

Eli Manning has been the guy for the Giants, playing for an organization and a fanbase that values his longevity at the position.

2015 will be a contract year for Manning, but the team is focused on the greater goal – competing for the division.

After the season they are confident a deal will get done, as they focused their first round pick – linemen Ereck Flowers – on protecting Manning so he can work with a healthy Victor Cruz and Odell Beckham Jr.

Lastly, there is Tony Romo – who plans on building on his consistency by playing behind the best offensive line in football in 2015. Last year was a magical season for the Cowboys' offense, with Romo playing in 15 of 16 games.

The 2015 Cowboys' offense should be a QB's dream, with an elite group of WRs and a core of running backs to balance things out in Joseph Randle, Darren McFadden, and Lance Dunbar.

The Giants and Cowboys are two teams that bought into a quarterback and built an environment for them to succeed in. Take notes, Redskins.

While Manning's future is uncertain, the Cowboys are in prime position to capitalize on their investment of Tony Romo starting as early as week 1 at home against Manning's Giants.