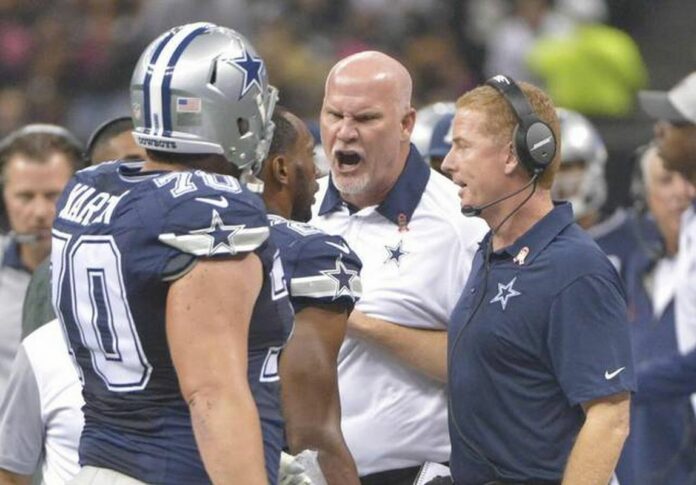 Joseph Randle had two words to say on his TD/fumble: "Six points."

When taking the “Six points” comment at face value, it is indeed accurate. Yet, it shows a deeper issue with Joseph Randle that began showing up in the public eye last season.

Whether it was the incident of theft, comments about other players on the team, or a few other incidents that made you scratch your head, questions have surrounded Randle's mentality toward the privilege of playing for the Dallas Cowboys and being in the NFL.

While the Offensive Line has struggled with their run blocking consistency this year, it's clear Randle's “Meat On The Bone” comments were quite overzealous. He also hasn't made the correct decisions with the ball in his hands on several occasions. None of which more questioning than his continued diving over the top on goal line situations.

As I mentioned earlier this week, this has been something the Coaching Staff has been on him about since training camp.

Then when questioned his remark of “Six points” leads you to believe that Randle still does not quite understand the error of his ways. There have been near costly fumbles every time Randle has decided to expose the ball in the way he has. On Monday Night Football, Calvin Johnson lost what could have been a game-winning touchdown by extending the ball in the field of play.

Jason Garrett, Gary Brown, and Frank Pollack had very good reason to be upset with Randle and his decision to ignore coaching. Despite that, coach Garrett came to his defense during his Press Conference on Monday, stating that Randle was indeed coachable.

Keep in mind, Garrett is not known to publically ridicule players. Yet, he did respond, “Combination of both” when asked if Randle seeing fewer snaps in the second half was a result of the fumble or game situations.

Well, does anything change?

Joseph Randle is not DeMarco Murray. He isn't gashing defenses for one hundred yards and more with regularity. He isn't showing to have the same selfless attitude that Murray displayed either. Quite frankly, Randle has shown far more arrogance than his play warrants.

While Murray had his fumble issues, Randle cannot afford to continue to upset his coaches. If Darren McFadden or Christine Michael begin having consistent success, there is no question a change will be made to who is the starting Running Back.

I don't believe a change will be made this week, however if Randle continues to show he is the wrong kind of guy and is not producing on the field, his role on the team will be diminished.

If rumors are accurate, perhaps Murray was correct in voting for removing Randle from the Dallas Cowboys. As of right now, Joseph Randle is proving to not be worth the headache.