With the NFL trade deadline coming and going yesterday without the Dallas Cowboys making a move, their roster for the remainder of the 2017 season is effectively set, sitting at 4-3 with the strong possibility that RB Ezekiel Elliott will not play again until week 15 at the Oakland Raiders.

The Cowboys’ young roster is still in a good position to compete, with a 2-0 NFC East record and both meetings with the division leading Eagles ahead.

Ahead of their week nine return home to face the Chiefs, here is how I would rank the Cowboys’ roster by position on offense and defense.

This part is easy. The Cowboys’ offensive line got off to a slow start on the season in sparking this running game, but both Jonathan Cooper at LG and La’el Collins at RT have transitioned nicely as new starters to open things up on the ground.

Even playing through injuries, Tyron Smith has been his usual dominant self at LT, while Travis Frederick at C and Zack Martin at RG continue their streak of dominance.

The Cowboys offensive line is still the best in the NFL by a decent margin.

In Dak Prescott I trust. Prescott has accounted for 17 touchdowns in seven games, proving that the Cowboys truly found a franchise quarterback in last year’s draft. Prescott’s yards per attempt may be down from 2016, but #4 has been surgical in the pocket, putting the ball where it needs to be and mostly keeping Dallas ahead of the chains.

Whether or not they play with Ezekiel Elliott for the next six weeks should do little to slow down Dak Prescott’s outstanding play, and adding rising QB2 Cooper Rush along with film-room extraordinaire Kellen Moore firmly places quarterback near the top of this list.

If you told me that I would be writing this article on October 31st (Happy Halloween!) and putting the Cowboys’ edge rushers as their third best unit, I would have been dumbfounded at where the sack production was coming from.

With a healthy DeMarcus Lawrence accounting for 10.5 of the Cowboys’ 25 sacks thus far, this team is pressuring opposing quarterbacks with a deep rotation off the edge.

Across from Lawrence at LDE, Tyrone Crawford has amazingly been active as a RDE. It is the consistent production from both of these starters paired with the expected contributions that David Irving, Benson Mayowa, Taco Charlton, and perhaps even Charles Tapper later in the year will make that puts DE at number three on this list.

Just how far down to slide RB on these rankings was one of the hardest decisions, as we simply don’t know how the Cowboys’ offense will respond to a probable running back by committee approach.

Should their workhorse, three-down player in Ezekiel Elliott be taken off the field, the Cowboys can turn to a trio of Darren McFadden, Alfred Morris, and Rod Smith to replace his skills in different ways.

McFadden is the proven veteran that’s been held by Dallas for the better part of two years in the wake of Elliott facing league discipline. Becoming the featured back in 2015, McFadden ran for 1,089 yards but only three touchdowns.

Only a bulk of carries will tell Cowboys Nation if McFadden still has some of that burst and elusiveness left to be effective. If not, it likely means more of Alfred Morris, who has done little in his frustrating efforts taking Elliott off the field again this season.

Brought in because of his scheme fit, Morris has appeared run down ever since transitioning from the Redskins to Cowboys – leaving only Rod Smith as a “change of pace” back with some solid downhill rushing ability and ample talent as a pass catcher.

Will the Cowboys win games without Ezekiel Elliott at RB? Nobody knows.

Will they still be able to run the football with some success? I think so, making RB my fourth strongest unit on the squad.

The story of the Cowboys’ 2017 season thus far is told pretty well through the numbers they’ve had available at the linebacker position. Without Sean Lee, Rod Marinelli’s defense is simply lost.

These past two weeks, Dallas has been able to put both Lee and Anthony Hitchens back on the field together, and as a result they’ve allowed less than 300 total yards in both games.

Just a few weeks ago, I was one of the loudest critics for Jaylon Smith to be taken off the field for his own protection, but even he has taken some strides in his confidence and MIKE LB ability to help the middle of the Cowboys defense.

So long as the Cowboys offense does what they set out to do each week, a defense that has their full linebacker corps will win them games.

This is a position of need for the Dallas Cowboys. Dez Bryant is still the leader of the Cowboys passing offense at WR, but getting him the ball consistently has been difficult for Scott Linehan. Bryant has 19 career games with two catches or less, three of which have come this season.

This leaves rookie WR Ryan Switzer, who has only been thrown the ball twice for two short receptions. Switzer has carried the ball three times for insignificant gains of three yards each time as well.

Dez Bryant being one of the best red zone targets in the entire NFL certainly elevates this unit as he helps them finish drives with touchdowns, but as the Cowboys passing attack opens up these next few weeks it will be fascinating to see who can step up out of this group of pass catchers that have all settled into niche roles. 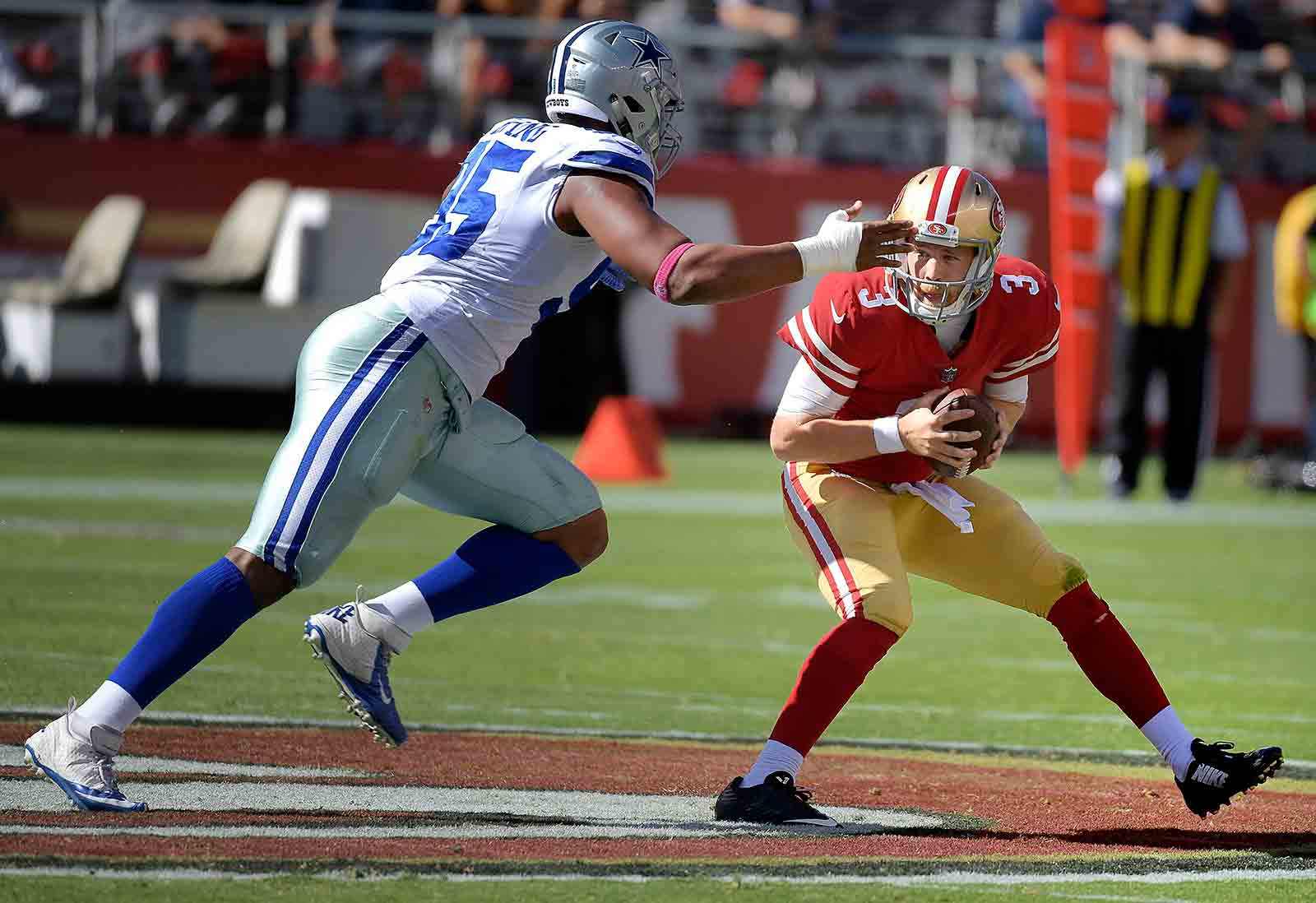 It is here that we find the single most important position in Rod Marinelli’s scheme, the 3T DT. With turnover for consecutive seasons at the spot and the lack of a productive 1T though, it is hard to put defensive tackle higher on this list despite the ridiculous numbers David Irving is putting up while lining up inside.

Irving’s five sacks in three games at DT have forced Maliek Collins, a perceived breakout star at the position, to slide over to the 1T position. This is not a position that suits Collins’ skills all that well, as he is much better working up the field and disengaging blockers on his way to the quarterback.

In a perfect world, Stephen Paea doesn’t retire mid-season due to recurring knee injuries, leaving Dallas with a formidable 1T to rotate Collins and Irving at the three. Without Paea however, the likes of Brian Price and Richard Ash have performed as well as the Cowboys could hope inside at defensive tackle.

David Irving is going to continue being a game wrecker at DT for the Cowboys, but the same can’t be said for any of the other rotational players here.

When you lose two veteran starters at CB in one offseason, it is hard to fill in a secondary quickly and expect things to work. Amazingly, the Cowboys have been decent at the CB position without being able to rely on sophomore Anthony Brown.

Brown’s frequent struggles in coverage is the main reason CB falls so far down this list, as he has left Orlando Scandrick and Jourdan Lewis as the team’s two capable cornerbacks.

When healthy, Scandrick has mostly been his usual self in the slot, and the best sign of hope for the Cowboys at CB is the play of rookie Jourdan Lewis. Getting fellow rookie Chidobe Awuzie on the field has been a nightmare for Dallas though, limiting their numbers in the back end defensively.

The Cowboys knew that this would be a transitional year at the CB position, and this transition is going better than expected. Jourdan Lewis is a star in the making.

For now, their lack of depth and experience here slides cornerback down the list.

Jason Witten could walk into Canton and get a bust and jacket from the Pro Football Hall of Fame anytime he wants. This is of course the leader at TE for the Cowboys once again in 2017, and behind Witten the team has worked James Hanna and Geoff Swaim into regular roles as run blockers.

As a rookie, Dak Prescott had Cole Beasley as his perceived security blanket, but this role has shifted back towards Jason Witten this season.

It is highly unlikely that Rico Gathers will contribute on offense this season, leaving these three tight ends as the guys to get it done for the Cowboys.

It says a lot about the overall state of the Cowboys roster when I had such a hard time putting any position last on this list. Another spot that was depleted through free agency, the Cowboys surprising pass rush has made up for some problems in the back end with continuity at safety.

Rotating three safeties in different packages worked brilliantly for Dallas in 2016, but this rotation has yet to be set the same way this season. Finding Byron Jones a reliable partner at safety has not gone as planned, as Jeff Heath quickly proved that he is solely a rotational player.

Without being able to rely on Heath as a “starter”, the Cowboys have had to put a ton of warranted confidence into rookie Xavier Woods. Naturally, Woods has his shortcomings as well with failed opportunities to tackle in space and stop the run.

Perhaps unexpectedly, it is the Cowboys front seven carrying their secondary at the moment, and it is a struggle to offer opposing offenses varying looks in the back end right now due to the situation at safety.

This is how I see the 2017 Dallas Cowboys roster breaking down by position. A concluding thought on these rankings should be that the Cowboys are pretty well off, with their main problem at some key positions being lack of proven experience.

Young players are getting opportunities to prove themselves all over the field, making it an exciting time for the Cowboys as a whole despite the Ezekiel Elliott situation.

The Cowboys pass rush has finally arrived, and with it they have a defense that can certainly support an elite offense led by their franchise quarterback Dak Prescott and league-best offensive line.

Let me know where you agree or disagree with these rankings by leaving a comment below!

Tell us what you think about “Ranking The Cowboys Roster By Position” in the comments below. You can also email me at Sean.Martin@InsideTheStar.com, or Tweet to me at @SeanMartinNFL!