Darren McFadden has been a good football player for the Dallas Cowboys for two seasons now. This was more than a lot of Cowboys Nation members were willing to admit about him after signing and being the featured back in 2015 – backing up Ezekiel Elliott in 2016 for the final three games of the season after returning from injury.

In terms of Darren McFadden’s career, the Cowboys have already gotten a lot out of the former Oakland Raiders’ draft pick, who came to Dallas with just one 1,000 yard season in seven attempts (six of which were cut short due to injury).

Rushing for 1,089 yards in 2015 merely cemented that any back could run behind the Cowboys’ offensive line, and the stars aligned perfectly for Dallas to be in position to grab Zeke Elliott to do just that this season.

Darren McFadden was re-signed by the team on Thursday, and the Cowboys need to be careful in not trying to stretch McFadden’s production too much into a 2017 season where he will play at 30 years old.

Elliott may not leave much “meat on the bone” for other backs in Scott Linehan’s offense, likely coming off the field less than he did as a rookie for the rest of his career, but Darren McFadden was this team’s only reliable option to play with another three-down back with pass catching ability.

The 2017 NFL Draft will serve as another opportunity for the Cowboys to add a young back to their depth chart – one that they should not pass up, and prioritize to an extent.

Dallas’ front office is one of the best in the NFL at finding players in the draft recently. They are also one of the best teams on the field at understanding and playing to their strengths.

While fans are panicking about facing the “need” to draft new prospects into the secondary, the Cowboys are well aware that they win games thanks to their offensive line and rushing attack.

A draft pick was already expected to be added to the offensive line – particularly at right tackle – so why not also upgrade the position that benefits the most from this line’s dominance at running back?

According to this excellent draft database of players organized by their physical fit with the Cowboys, we see that there are plenty of intriguing options in the later rounds. This list includes Aaron Jones, Jeremy McNichols, Kareem Hunt, Donnell Pumphrey, and Marlon Mack among others.

All of these versatile running backs can be had at different points in the draft, and I’ve even suggested a back like Wayne Gallman out of Clemson for the Cowboys – who would likely cost them the 60th overall pick, where I have him graded in the second round. 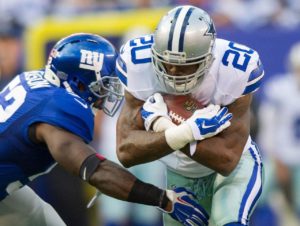 In a perfect world, Darren McFadden is good again in 2017. In any world, Ezekiel Elliott is good – and that is ‘good enough’ for the Dallas Cowboys to succeed running the football. If they want to consistently win with their running game though, which the Cowboys are set up to do for a long time, they’ll need an injection of youth sometime soon to their backfield.

This upgrade could come pretty early in the 2017 NFL Draft, and if you’ve been paying attention to how Will McClay builds this team, you’ll have no complaints with the Cowboys adding to their world-beating offense with a new ball carrier sooner than later.

Tell us what you think about “Re-Signing Darren McFadden Shouldn’t Stop the Cowboys from Drafting a RB” in the comments below. You can also email me at Sean.Martin@InsideTheStar.com, or Tweet to me at @SeanMartinNFL!