The Dallas Cowboys stayed true to their commitment of heavily addressing the defense in the 2017 NFL Draft, committing seven of their nine picks to that side of the ball. With their offensive core firmly in place, the draft still presented the Cowboys a chance to bolster the wide receiver position – and potentially much more – in the fourth round with Ryan Switzer and seventh with Noah Brown.

With the full slate of rookies reporting to Minicamp yesterday to #EarnTheStar, let’s attempt to find 2017 roles for Switzer, Brown, and a few of the offensive players Dallas signed after the draft.

Ryan Switzer has quickly developed into a fan favorite player for many in Cowboys Nation, which is warranted when you look at the wide range of ways Switzer can impact any given game as a rookie for America’s Team.

Already well-known for giving Offensive Coordinator Scott Linehan another Cole Beasley-esque slot receiver to utilize in tormenting opposing defenses, Switzer’s name has been mentioned by the Cowboys as a potential replacement to departed running back Lance Dunbar.

This “gadget player” role is currently occupied by Lucky Whitehead, who is limited as a receiver but has value as a kick and punt returner – another position Ryan Switzer can immediately upgrade.

Switzer made it very clear right after his selection that the Cowboys were one of multiple teams that graded him as this draft class’ top return man, giving him a clear spot to make his immediate presence felt.

Additionally, look for Ryan to make the most of his offensive touches both in the slot, on jet sweeps, and from anywhere else the Cowboys find to show off his explosive play ability.

Brown’s Ohio State teammate Ezekiel Elliott was a big voice in bringing this dominant blocking receiver to the Cowboys, where Noah will now face an uphill battle in getting on the field in 2017.

As a seventh round pick, the Cowboys should certainly be excited about their long-term potential with Brown, but for now he’ll likely be limited by the receivers ahead of him on the depth chart.

Dez Bryant, Terrance Williams, Cole Beasley, and Ryan Switzer should all be locks to make the roster, leaving the fifth and potentially final WR spot to either Brice Butler, Noah Brown, or a “dark horse” candidate like Quincy McDuffie.

Dallas has already shown some commitment to Butler by re-signing him prior to the 2017 season, and with this confidence should come extra opportunities in training camp. Noah Brown will have his flashes as a physical specimen that can level defenders as a blocker, but it may not be enough to earn meaningful snaps this season.

The Cowboys officially signed 13 UDFA players ahead of their Rookie Minicamp, eight of whom will fight for their chances in a nearly complete offense. Here are just a few that I think are worth keeping a closer on eye than the rest. 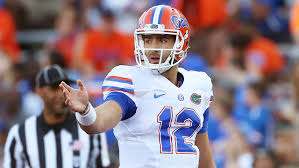 Appleby spent three seasons at Vanderbilt before playing his Senior season with the Florida Gators, completing 127 of 209 passing attempts for 1,447 yards and 10 touchdowns to seven interceptions.

Doing so while displaying enough intriguing pro traits to earn a spot on the Cowboys following the draft, Appleby’s competition will come in the form of fellow UDFA QB Cooper Rush.

Performing against better competition isn’t the only advantage Appleby has in his fight for either the QB2 spot with Kellen Moore or the developmental third QB position. When given a clean pocket, Appleby will display some flashes of great accuracy with his very strong arm, but struggles to complete the touch throws necessary to be a well-rounded passer or diagnose situations under any pressure.

Cooper Rush was never able to put everything together as a next-level QB prospect over his four years starting at Central Michigan, where he became the MAC’s second leading passer of all time with 12,894 yards.

Rush’s slight upside paired with some intangibles as a pocket passer give him a chance to carve out a role as a QB3 in this league, but he will need to improve his overall mechanics and sloppy footwork to show he can deliver the ball accurately to all levels on a much more consistent basis.

Figuring out how the depth chart will fall along the Cowboys’ offensive line at this point in the offseason is a fruitless exercise, but it  goes without saying that undrafted players will likely have a hard time cracking a roster with first-round starters at three positions.

That said, Michael Coe of North Dakota brings an interesting blend of two elements that may give him a chance in Dallas – versatility and technique talent.

Coe gives the Cowboys a chance to sneak more depth onto their offensive line should he earn a spot, experienced at all five positions, approaching tackle, guard, and center with the same toughness that Coe pairs with his length and functional strength to be successful.

Also experienced as a tackle and guard, Theaker will have to find a home in the NFL at  guard – where the Cowboys currently are considering all options on the left side.

Theaker plays with a visible mean streak on tape – one that unfortunately replaces his technique too often – but holds up just fine at the line of scrimmage and can deal with multiple types of rushers.

Theaker will have his flashes with the Cowboys this summer because of this, but absolutely needs to improve as an aware athlete that can bend his hips and steer defenders if he wants to hold up against next level defenders consistently.

Tell us what you think about “Rookie Minicamp: Finding Roles for Cowboys’ Offensive Rookies” in the comments below. You can also email me at Sean.Martin@InsideTheStar.com, or Tweet to me at @SeanMartinNFL!