This is going to take some getting used to, Tony Romo leaving. He’s our quarterback. And he’s been our quarterback for a decade. Tony Romo took over for the Dallas Cowboys at a time when we needed someone – anyone – to take charge and he’s brought about an era for Cowboys fans that many of us believed could only end with Romo’s last snap, period.

Until this past year, I’m not sure most even considered the possibility that his last snap on a football field could be under another team’s helmet, and thankfully, we don’t have to worry about that.

It’s been a bittersweet couple of years for Tony and his fans. The repeated collarbone breaks in 2015 sucked the wind out of some mighty sales after the successes enjoyed during the 2014 campaign. But it opened some eyes and made us look further forward than just Romo.

We drafted Dak Prescott with the 135th overall pick of the 2016 NFL Draft with just that in mind, the future. The goal was to get a promising rookie behind Tony Romo to watch and learn from one of the game’s best, and before the season even began that plan had fallen to pieces.

Don’t get me wrong, nor any of us, really. We see Dak Prescott; we know who he is and what he means to this franchise. We saw it in week three of the 2016 preseason when he stepped in after Romo’s back injury, and we saw it during the second half comeback against the Packers in the playoffs. There is no denying that he is the future of this team, come what may.

But we’ve all got memories of Tony Romo doing something great with that star on his helmet, probably some of the stupid things he’s done as well.

We aren’t holding any delusions about who or what Tony Romo is. 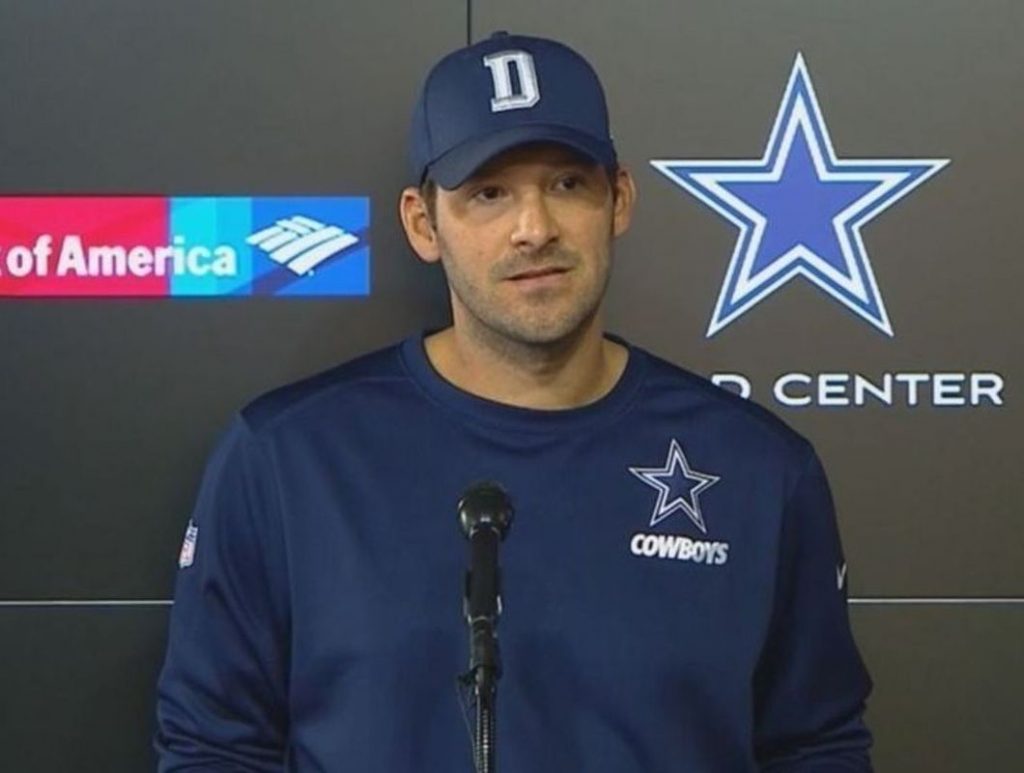 When I opened this blog in 2008, Tony Romo was already the starter. Seattle had already happened and Romo was already being dubbed a choke artist. I have fought against such monikers for as long as I’ve been blogging about the Cowboys, and now? Well, now that fight is over. Now I must listen to Tony a few times a year talking about the men he used to call teammates.

Tony Romo has meant so much to so very many of us fans, and our slogan here at Inside The Star is “Voices of a Nation” for a reason. So, the staff wanted to also share a few words about Romo’s departure.

It is definitely bittersweet to see Tony Romo’s time with the Dallas Cowboys come to an end. I’ve been a fan since he first took over as the starting QB and hate to see that this is the way his career will end in Dallas.

Tony Romo has been a true professional both on and off the field, and you can’t deny how much he has given/meant to the organization. He put his mind, body, and soul on the line for his teammates and I wish him nothing but the best as he moves on from playing in the NFL. I don’t care what team he is playing for in 2017, the Cowboys or CBS. I will always be a fan and will root for him.

As a young fan, Tony Romo has been the guy, ever since I can remember. Literally. The memories he leaves Cowboys Nation are a lot. There’s the loss against the Denver Broncos, the Washington game in 2013 when he played hurt, and of course, the Punctured Lung Game. There’s even his last Touchdown pass as a Dallas Cowboy during a meaningless game versus the Eagles.

Number 9’s journey in Dallas was a special one. Perhaps one in which neither the media or the fans were fair to him. From a Cowboys fan, I wish him the best and I invite you all to appreciate his greatness in Dallas. He gave this franchise his all. Every time.

From the bottom of my heart, thank you Tony.

Nobody needs me to describe the feeling of being a die-hard sports fan; we all know what it is like to live and die with a team, specifically the Dallas Cowboys. The Cowboys have been my team since birth, and I’ve associated that with one man, QB Tony Romo.

When I prepared myself mentally and physically each week to not only watch, but invest my heart into the Cowboys, I invested into whatever amazing thing Tony Romo had in store for us. The only quarterback I’ve ever known, I defended Romo tirelessly through wins and losses, always appreciating the bond I had with fellow Tony supporters.

Now, I simply appreciate that the only team Tony Romo will know is my team, and that I got to watch a legend. What else can a sports fan ask for? Thank you for every single thing you meant to America’s Team, Tony.

For us Cowboys fans born in the 1990s, Tony Romo is our quarterback. For much of my childhood the Cowboys were awful, their dynasty days behind them and seemingly nothing to look forward to on the horizon. Unable to replace Troy Aikman, the Cowboys tried a carousel of washed-up veterans and overlooked young players. Both failed.

Then an undrafted quarterback out of Eastern Illinois, Tony Romo came in at halftime of a divisional loss to the hated Giants and dragged this franchise from the abyss.

Sure, Tony Romo never won a Super Bowl, and hell, he’s never even been past the Divisional Round. But there is something to be said about a quarterback who never had a losing season and kept this team afloat while the front office rebuilt the roster.

Now, the Cowboys look to be on the verge of a championship run. But this championship-ready team was built, quite literally, on the back of Tony Romo. So thank you, Tony Romo, for everything you’ve done, for the Dallas Cowboys and for my life as a football fan. I can’t wait to hear you call games every Sunday.

Tony Romo is the first great Cowboys QB that I got to watch from beginning to end. From the thrill ride of his 2006 debut all the way through, Romo has been an incredible story and player to follow. Getting to follow every moment of that story as a live viewer gives him a special place in my heart.

Troy Aikman had already won his first Super Bowl when I was old enough to start really appreciating football. I didn’t get to see his early struggles, be it a one-win season as a rookie or the early playoff exit in 1991. I got to come in on greatness already realized, rather than watch it develop.

The saddest thing for me about Tony Romo’s exit is that his lack of postseason accomplishments will forever drag down his mainstream reputation. I wish so greatly that we could have seen him have the glory that his own individual play deserved. He was better than what so many people think

Finally giving way in 2000, I watched a majority of the games and experienced Troy Aikman, until Troy Aikman got hurt and then retired. The next five plus seasons of quarterback play still haunt me.

It wasn’t until the middle of the 2006 season, when Tony Romo entered the game, that I saw hope in the Dallas Cowboys’ quarterbacking situation. The years that followed were certainly worthy of the “Romo-magic” and “Jedi” nicknames. The 4th quarter comebacks, the spin moves away from pass rushers, the “never say die” way he played the game; it was amazing to watch, and amazing to be a fan, and at the same time gut wrenching because only two or three times did he have a team around him that was capable of making a Super Bowl run.

I have only ever owned three football jerseys: Joe Montana, Darren Woodson, and Tony Romo. One is in the Hall of Fame, one will be, and the other most certainly should be despite the false narratives. The quarterback who was at the helm of my first fantasy football championship: Tony Romo.

While it’s a bummer that you won’t be a Cowboy, and won’t be playing anymore, it’s exciting that we are going to get to see you every NFL Sunday for a long time to come. You will be as great and magical talking about the game as you were playing it. Thank you, Tony!

Yesterday was a long time coming, yet that doesn’t make it any easier to digest.

Perhaps the only saving grace for those of us who supported Tony Romo throughout his career, often in the face of staunch opposition, is that he will not be playing for another team, and by extension, potentially playing against his Cowboys.

For me personally, I remember his heroics at the end of games. Sometimes we lost anyway, even by his doing, but when we won, his actions made even his detractors feel special for a day.

Perhaps my favorite memory of Tony Romo is the 2014 Texans game, when he avoided J.J. Watt with his signature spin-move and found WR Terrance Williams somewhat open in the endzone for a touchdown.

It was something he did countless times throughout his career, but on that day, it was special for another reason. That day, two lifelong Dallas Cowboys fans (Derek Maberry and Dezmond Scott) who had never been to a game before were in attendance at AT&T Stadium, and for the first time I was responsible. I’ve since sent several fans to games by way of a sponsorship between Inside The Star and Reliant Energy, but that was the first. It made the play that much more memorable to me.

So, as others have been doing for weeks now, I bid Tony Romo farewell with thanks for more than 100 games I will never forget, and the devotion with which he so often led this team.

While Tony Romo may not file official retirement papers in time, making him a Dallas Cowboy for each day of his NFL career, that’s how he will be remembered.

The Cowboys, as announced yesterday on InsideTheStar.com, have cut Tony Romo, designating him a post June 1 cut. The move adds a little space to the team’s salary cap space in 2017, which they’ll likely use to sign draft picks this summer.

For more on the Tony Romo updates and more, stay tuned to @TheStarPodcast in the next day as we’ll be discussing more Cowboys news with a fresh episode. Now that things have actually happened, a welcomed break from the speculation that has run rampant for these last three weeks.